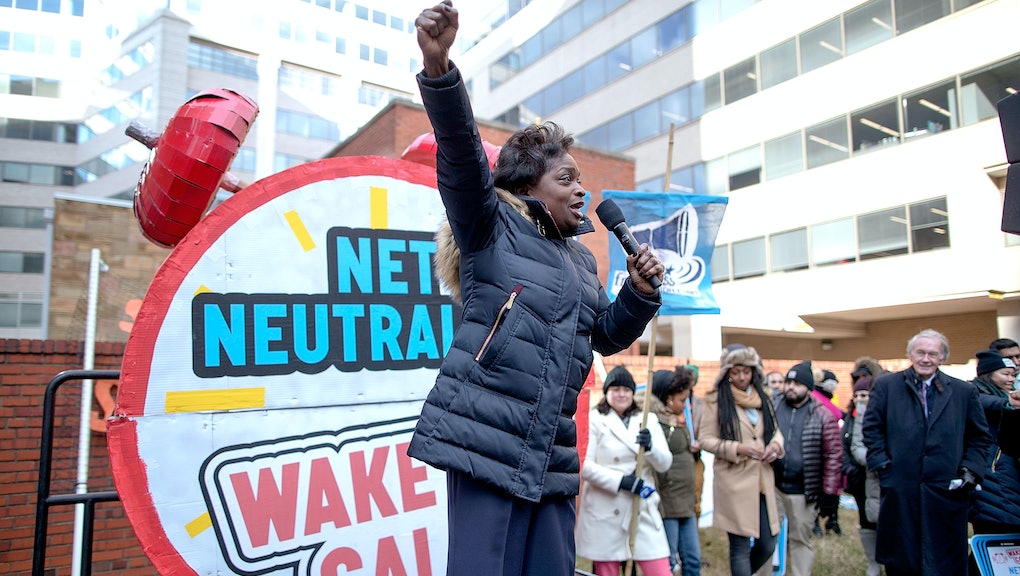 Imagine if, in the moment when Philando Castile was shot by a police officer in Minnesota, his girlfriend, Diamond Reynolds, wasn’t able to livestream it on Facebook. What if Missouri residents could not tweet, in the moments after a Ferguson officer shot Michael Brown?

Social media is, in part, the reason these cases of police brutality are known worldwide. That’s why a broad coalition of activists in the Black Lives Matter movement says it plans to fight the FCC, after the policy keeping the world wide web accessible to all communities changed Dec. 14.

Commissioners of the Federal Communications Commission voted 3-2 to repeal Obama-era rules that discouraged internet service providers from discriminating against customers and censoring information to support their bottom lines. Without net neutrality, ISPs could begin pricing access to certain content at a premium. The two-year-old policy was in place as an already narrowing black-white digital divide continued to close, studies show.

Activists have said that without net neutrality, millions of people in communities that are already economically disadvantaged could lose equal access to educational resources, jobs, health care information and social media platforms for activism.

That’s why the Movement for Black Lives, made up of close to 50 grassroots organizations associated with BLM movement, will create a new set of resources to help communities understand the real life implications of the FCC’s vote, a spokesperson said on Tuesday. The resources could include a tool kit for local organizers.

M4BL groups such as Color of Change and the Center for Media Justice have already released fact sheets that spell out the impact.

But public education campaigns are just the first in a series of needed actions, Erin Shields, national field organizer for internet rights at the Center for Media Justice, said in an interview on Monday. A number of civil rights groups plan to mount lawsuits against the FCC; to stage mass protests, in support of net neutrality policies at the state and local levels; and to pressure Congress to act, she said.

“Often times this fight is framed as corporations battling each other [over competition in the market,]” Shields said. “But really this is a community issue. It’s not just about, you know, Netflix streaming content to your computer faster. It’s about your ability to organize.”

In 2015, the FCC publicly released its Open Internet Rules, which prohibited ISPs from restricting communications, content and applications from passing freely over broadband and wireless internet connections. That had a large impact on black people, low-income and rural communities whose adoption of smartphones for accessing the internet outpaced all other demographics between 2013 and 2015, according to a Pew Research Center survey.

Much of the anger over the FCC’s vote has been directed at the commission’s chairman, Ajit Pai, a former attorney for telecommunications giant Verizon and opponent of Open Internet Rules, who President Donald Trump appointed in January. Pai has cited a 6% decline in ISP network expansion investments as the reason why net neutrality was actually harmful to the industry.

Maya Wiley, senior vice president for social justice and professor for public and urban policy at the New School in New York City, said Pai’s sentiments miss the point entirely. “What Donald Trump did was essentially elevate Ajit Pai to be the chairman of the FCC because he essentially made it clear that he was going to be the president for large corporations,” Wiley said in a recent interview with Mic. “That we’re going to seek to advance their business interests, over our democratic interests.”

Even as telecommunication companies expanded broadband infrastructure to give more communities speedier access to the internet, there have been one or two high profile examples of companies allegedly skipping over nonwhite, low-income neighborhoods in favor of wealthier and whiter enclaves. The lack of net neutrality rules could easily exaggerate disparities in broadband access between black and white communities, Wiley said.

Shields, who is black, said she found other black organizers telling social justice stories on the internet that weren’t being told by mainstream media outlets. That’s why equal access to the internet has been crucial to the BLM movement, she said.

“I’m an organizer first,” Shields said in an interview. “We use the internet to tell our stories the way that we want them to be heard. And so it’s incredibly important.”