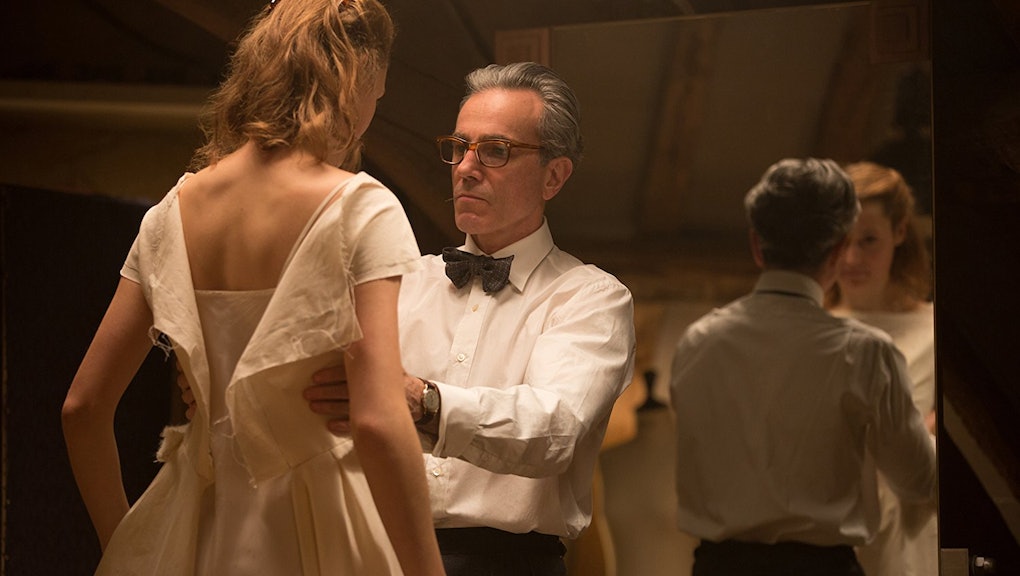 I can’t recall ever witnessing anything at once so carnal and refined as the breakfast order of Daniel Day-Lewis’s British couture designer, Reynolds Woodcock, in Paul Thomas Anderson’s newest film, the ’50s-set Phantom Thread. It’s partially what Woodcock orders (everything) and partially the confident and composed desperation with which he orders it. He’s ravenous, but maintains perfect decorum. You see hunger in his eyes, which gaze into the cafe waitress’s; she, the effortlessly elegant Luxembourgian ingénue Alma (Vicky Krieps), is the menu. When she brings him his Welsh rabbit with a not-too-runny poached egg on top, along with bacon, scones, butter, cream, raspberry jam, Lapsang tea and, for good measure, sausages, he asks her to dinner.

The message seems clear: Reynolds Woodcock is a man of great appetites. But Anderson has already made his sex movie (1997’s porn-industry epic, Boogie Nights). Phantom Thread, which opened in theaters on Monday, is instead the cat-and-mouse story of an artist and his muse. As such, Woodcock’s hunger is not so much a manifestation of lust as it is a manifestation of inspiration. He doesn’t want to bring Alma into his bedroom. He wants to bring her into his office.

And he does. In a scene so lyrical that it feels like a dream, Woodcock tests different colored fabrics against Alma’s fair skin and takes her measurements. Despite bits of ominously pitched banter, the sequence has a fairy-tale quality to it, with Jonny Greenwood’s feathery orchestra playing lightly in the background, and with Alma, who I inferred was a country girl, essentially being made into a princess.

But Anderson, who’s on his eighth film, doesn’t give the impression that he is a filmmaker temperamentally capable of making a fairy tale — or, at least, not capable of making one without turning the genre’s conventions inside out. He’d rather make frogs rain down from the sky than turn a frog into a prince.

And as far as princes go, Woodcock is as charming and graceful as any, but his status as a great artist, Anderson seems to be saying, doesn’t entitle him to act like royalty. Of course, he does so anyway. Woodcock is ridiculously particular and regimented, admonishing Alma at one point for making too much noise spreading butter on her toast at breakfast.

But just as you can see Woodcock wanting to drink up Alma’s image in early scenes, you can see a glint of timid admiration in Alma’s eyes and in the way she hangs her head. Being the object of Woodcock’s gaze makes Alma feel special. “I never really liked myself,” she says at one point. “But in this world, I’ve become perfect. And I feel just right.” Woodcock, in turn, exploits the inherently unequal artist-muse relationship he has with Alma, just as so many characters in Anderson’s other movies have done in their own ways. When it comes to love, in Anderson’s films, even the highest form of exultation is usually born out of some strain of exploitation.

As opposed to most frothy Hollywood romances, in Anderson’s pictures love is usually a direct response to a deep, dark internal need. Love — romantic, platonic, familial — is one of the ways characters try to make up for their own shortcomings and familial deficiencies. The 47-year-old auteur’s characters are often broken in some way (see: the entire ensemble in 1999’s devastating Magnolia), and love is a way for them to subconsciously attempt to fix, or accept, themselves.

With the exception of There Will Be Blood — a film whose oil prospector protagonist, Daniel Plainview, looks at most people and sees nothing worth liking — love plays a central role again and again in Anderson’s oeuvre. And in most of his films, the director draws a line connecting a character’s issues with their own family to their romantic relationships.

For creations like the down-and-out, Reno-dwelling John (John C. Reilly in 1996’s Hard Eight), the young, well-endowed Dirk Diggler (Mark Wahlberg in Boogie Nights) and the unruly war vet Freddie Quell (Joaquin Phoenix in 2012’s The Master), who are all orphans in one sense or another, the affection of a surrogate parental figure is more enduring than the temporary pleasure from sex. For the socially awkward Barry Egan (Adam Sandler in 2002’s Punch Drunk Love), it’s the reverse: Love is an escape from his own loneliness and from his seven sisters’ harassment.

And in almost every one of those cases, where there is need there is exploitation. John, Dirk Diggler and Freddie Quell are all nurtured by a parental stand-in because of various reasons: John’s dark secrets, Dirk’s body, Freddie’s commitment to a cult-like cause. There are other times, though, when the desperate internal need characters feel causes them to objectify, rather than be objectified: Frank T.J. Mackey, Tom Cruise’s misogynist sex guru in Magnolia, instructs his followers to treat women as sex objects (“Respect the cock and tame the cunt”), lest they leave themselves vulnerable or weak; and in the depths of Barry Egan’s loneliness, he calls a phone sex line.

In Phantom Thread, Reynolds Woodcock tries to fit Alma neatly into his life, but he won’t fully submit himself to her. For Woodcock, the work has always been paramount because it’s central to his identity and a connection to his dear late mother, who taught him his trade. (So, yes, Phantom Thread is yet another Anderson movie in which familial issues shape adult relationships.) In his eyes, Alma is supposed to play her role by joyfully placating him.

But Alma is different from the other women Woodcock has been with. For one thing, she is poised and strong: “I can stand endlessly,” she boasts at one point. And she doesn’t blindly revere Woodcock, either: At another point in the film, she snappily defends the ways her taste differ from Woodcock’s. Alma is a strong woman who won’t be exploited.

As the film goes on, Alma realizes that she must upend the dynamics of control in her relationship with Woodcock if she is to hold onto him. Without giving away any plot specifics, Alma lodges herself deep in Woodcock’s heart by exploiting his love for his mother. She finds a way to fill the hole in his life that his work has long filled. She makes him need her.

And, surprisingly, it works — for both of them. The initially one-sided dynamic evolves to become more balanced. The difference between the exploitation in Phantom Thread versus Anderson’s other movies is that in Phantom Thread, the exploitation is in service of love rather than something that undermines it — which is about as close as things get in Anderson’s universe to happily ever after.