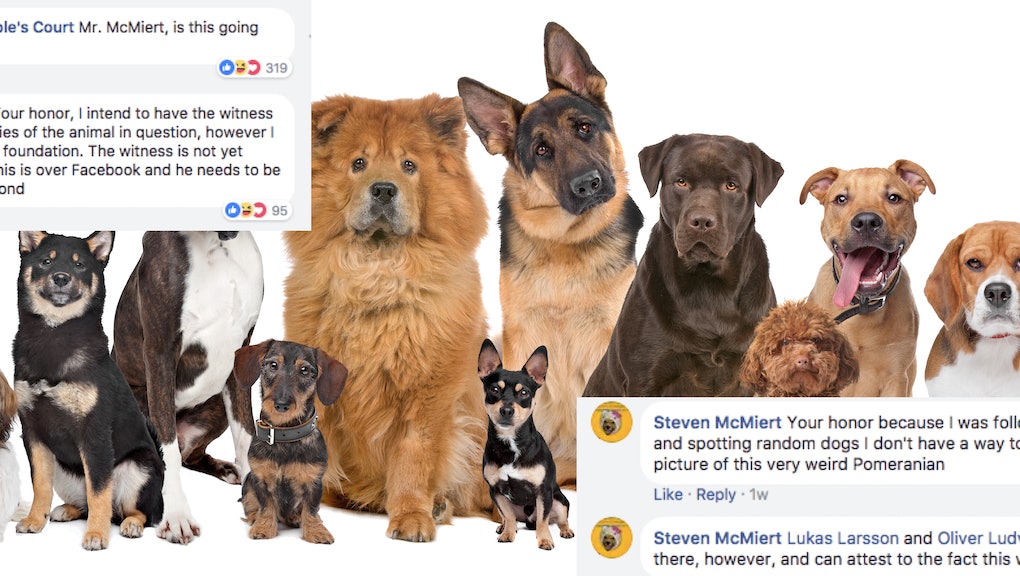 Simple visual illusions that make us question our powers of perception have captivated the internet since that white-and-gold dress (or was it blue and black?) made the Earth stand still in 2015.

Now the happiest place on the internet has erupted in some hilariously entertaining courtroom-style drama over one simple question: Does this photo show a dog’s ass — or a cat’s?

Yes, really. Welcome to the great Dogspotting Butt Scandal of 2017.

Dogspotting is exactly what it sounds like — it’s a Facebook group in which people share photos of dogs they’ve seen and are awarded points. There are more than 755,000 members, and the rules are simple:

It also goes without saying that the Dogspotting group is no place for cats.

It all started when a man who goes by Steven McMiert posted the following image in the Facebook group.

Moderators immediately flagged it — it clearly appears to be a cat’s butt.

That’s when all howl broke loose. McMiert was banned from Dogspotting.

McMiert says he thought the creature in the pic was a dog — specifically a long-haired Pomeranian.

Now here’s where things get even weirder. He took the moderators to court — Dogspotting People’s Court. That’s another Facebook page, a 14,000-person spinoff of Dogspotting.

McMiert, his friends, the People’s Court “judge” and a Dogspotting moderator performed an entire court case on the Facebook page. They played witnesses and lawyers, using as much legalese and roleplaying as possible.

“Initially, I figured it would be a quick plea on the defendant’s part, but he quickly revealed himself to be a worthy adversary,” Tyler Kocian, a moderator for Dogspotting who played the prosecutor in the case, said in an interview. “He understood the finer concepts of law and was able to hammer the prosecution and put up a very strong fight.”

McMiert defended himself against the prosecutor, called and examined witnesses and argued that he should be let back into the main Dogspotting group.

“The cross-examination went pretty poorly for me, and my witnesses didn’t hold up as well as I was expecting under their cross-examinations,” Kocian said. Kocian was actually the person who banned him from Dogspotting in the first place. “The post was, ‘Look at this strange dog,’ and that’s an automatic red flag for me of some non-doggery being afoot,” Kocian said.

Kocian became the prosecutor for this case because he was the only moderator online at the time, he said. “When he made his post, I made a response, and he made this sort of elaborate legal-jargon-filled post,” Kocian said. “And I was like, ‘Oh, this guy looks like he might play along.’” And play along he did, as many people commented and followed the debate.

In the end, it was determined that McMiert did really believe that the animal in question was a dog when he posted it. He was let back into the Dogspotting group.

Overall, people seemed to love the trial. The post has 1,700 likes and has been shared more than 195 times.

As for Kocian, he’s just happy people are having fun with Dogspotting. “Come on in, the dogs are fine,” he said. “It’s just fun, if you like dogs. Especially in today’s world, where everything’s kind of crappy, it’s nice to go somewhere and just look at dogs, and talk about dogs and just have a good time. I think that’s the message that Dogspotting is trying to bring to the world — look at dogs and be excellent to each other.”

That sentiment may be what makes Dogspotting such a thriving, positive community. The moderators and group members take the command to “be excellent to each other” seriously.

Groups, in general, are the most subversive but close-knit communities on Facebook. There’s even a prospering subsection of Facebook groups called “Weird Facebook,” in which people share obscure memes and come up with their own inside jokes. Those groups can go awry, though, and they’re often shut down by their own creators because of infighting. Those groups don’t have as clearly imposed rules, though.

“I know one of the things that helps engage the community is the rules, and the fact that we enforce them,” Kocian said. “I’ve been in lots and lots of Facebook communities that have as many or more members, and it’s not really as fun because the rules aren’t enforced, and they don’t have any sort of quality control.”