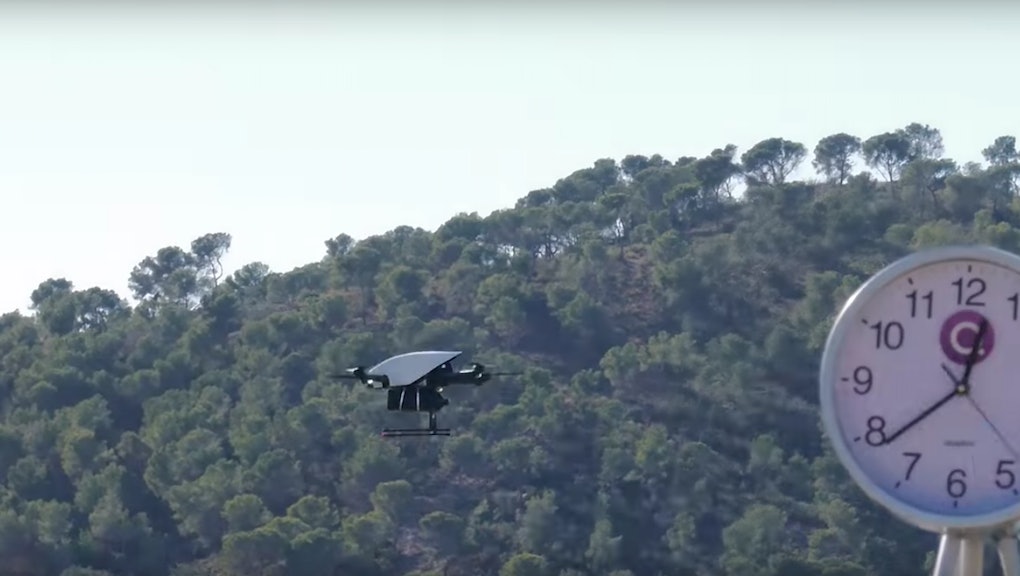 This drone just completed its longest flight ever, and that could change the way we use them

Drones are already delivering packages, extinguishing wildfires and planting trees. But as it stands, various models have trouble hovering in the air for extended periods of time.

Now, drone manufacturer Quaternium is showing off the HYBRiX.20, a hybrid gasoline-electric drone the company claims has broken the world record for longest flight — among self-powered drones with multiple rotors, that is.

Quaternium has proof of HYBRiX.20’s long flight — after all, it filmed all 4 hours and 40 minutes of it. The video shows the drone hovering in air against a clock, with Spanish trees and strange, war-movie-esque music in the background.

Despite the cheesiness, 4 hours and 40 minutes is indeed boastworthy. According to New Atlas, “Most multicopter drones you can buy off the shelf boast flight times of 20 to 30 minutes.” Meanwhile, Guinness World Records currently has the longest-recorded multicopter flight down as 2 hours, 6 minutes and 7 seconds.

The drone could, in theory, make lives far more efficient. Filmmakers could potentially shoot video for longer, for example. Farmers could also monitor crops without refueling as often (right now, these drones are already used for crop inspections).

Plus, if the drones are able to carry or dispatch objects, their hovering would also perhaps improve a number of other services — some of which likely haven’t been imagined yet.

The more milestones we see among drone manufacturers, the more possibilities we will unlock for the future.