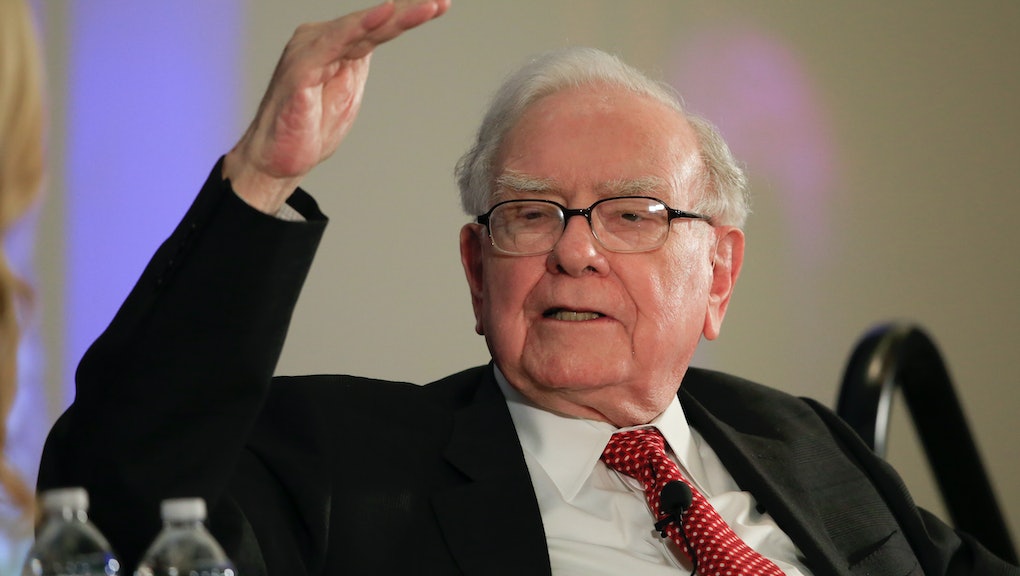 Should you buy bitcoin? Warren Buffett’s $1M bet has a hidden lesson for cryptocurrency investors.

A major trend in 2017 was the growing number of big investors (and banks) finally embracing cryptocurrencies like bitcoin, Ethereum-traded ether tokens, litecoin, Ripple, and others, lending more credibility to the space. And it wasn’t just Goldman Sachs: New York Times writer Nathaniel Popper recently counted no fewer than 175 different hedge funds — vehicles many wealthy investors use to grow their money further — all with some exposure to virtual assets.

But notably, several successful investors are still sitting the rally out, including the world’s third-richest man Warren Buffett — who, as it happens, has criticized both bitcoin and hedge funds as flimsy investments. While acknowledging that bitcoin’s underlying technology is intriguing, Buffett called bitcoin a “mirage” back in 2014.

Now, superficially, Buffett’s advice might ring hollower today: $1,000 worth of bitcoin bought back when the Oracle of Omaha issued his criticisms, for example, would be worth more than $20,000 now. Yet before you write off Buffett’s warning, it might help to better understand where he is coming from — specifically as an investor who always thinks about longer-term time horizons and deeper, intrinsic or underlying value.

One way to do that is to look at a big bet that Buffett just won. Now that 2017 has come to a close, he is victorious in a decade-long, eventually-$1 million dollar wager first made back in 2008 to prove hedge funds — and their promise they could “beat the market” — were full of it: Over the last decade, a sort of hedge fund supergroup failed to do any better than a simple index fund of the 500 largest stocks, the likes of which regular retail investors can find in their retirement plans. (On Dec. 30, the Wall Street Journal reported Buffett would be giving his winnings to Girls Inc. of Omaha.)

So why did Buffett win, exactly? His hedge fund-backing opponent actually already conceded defeat in a Bloomberg op-ed back in May — saying the stock market “defied the odds” and performed better than he thought it would.

But Buffett has argued that the performance aspect is only part of the story. Even if you did stand to benefit from hedge funds’ valuable advice during a downturn, he writes, most gains would get sucked up by the high fees the hedge funds charge. And even the best talent money can buy wouldn’t be able to, in his words, do any better than the “rank amateurs who simply sat still.”

What does Buffett mean? And what does this have to do with cryptocurrencies and bitcoin? Here are three hidden investing lessons you can take from Buffett’s big win — no matter what kind of asset you’re thinking of buying.

1. People who think they are investing might actually be gambling

Gambling is all about betting on winners. Investing can be that — but it can also be something less sexy: Buying a little bit of everything, and sitting patiently.

One case for keeping it unsexy? People often underestimate the role of luck in their success. Put more precisely, psychologists have shown that people tend to be far more aware of the things that are holding us back than the things that are helping us along: When you’re riding your bike against a headwind, as you huff and puff away, you’re very aware of the extra effort you’re expending. But when the wind changes to be at your back, you adjust quickly to the new normal — and might stop feeling the wind at all.

Buffett would argue that hedge fund proponents are falling into a similar trap: When they win, they believe it was because of their winning strategy. It was all the late nights of number-crunching that paid off; luck had nothing to do with it.

Bitcoin investors are arguably falling into a similar trap. After all, it’s not hard to find examples of people who will cop to buying bitcoin even if they don’t necessarily understand it, something that even bitcoin fans like MarketWatch columnist Cody Willard caution against.

If you bought bitcoin with the plan of making a quick buck, as self-help personalities like James Altucher have sometimes encouraged people to do, you weren’t investing, you were gambling, or “speculating.”

There’s nothing wrong with rolling the dice and getting a little lucky every once in a while, but sooner or later the house always wins. To drive the metaphor home, on New Year’s Day, Bonus.ca, a gambling affiliate marketing site, announced that it would be expanding into cryptocurrencies.

What was the best way to make money investing in cryptocurrency last year? It wasn’t through bitcoin. Indeed, bitcoin didn’t even make the top ten list, as the finance publication Quartz notes — no fewer than 13 other cryptocurrencies outperformed it in 2017.

Some of those currencies like Ethereum and Litecoin are reasonably well-known, but others — including one called Ardor that returned nearly 17,000% — would still reasonably be described as on the fringe.

Odds are, if you tried to choose crypto’s winners and losers at the start of the year, you would have chosen wrong.

This helps explain why Buffett’s strategy of “buy everything” — like the 500 biggest U.S. stocks — works so well: Diversification. The hedge funds, by trying to pick and choose winners, probably would have missed opportunities like investing in Ardor. Or worse, they might have invested in coins that eventually crashed — and never recovered.

But if you buy a little bit of everything, your odds of owning a piece of the year’s biggest success story goes up: In 2017 that was Ripple (XRP). But 2018 could be a whole different ball game; plus there’s always the chance that the crypto sector — as a whole — could tank.

3. Transaction costs are an invisible drain on your wealth over the long term

The final reason why Buffett won his bet? People often underestimate how much of their investment can be eaten up by transaction costs. If you’re buying diversified stocks without paying an expert to choose them for you, then more money will ultimately wind up staying in your pocket.

Just how much cash? A hypothetical investor who saves about $500 a month for thirty years in an actively managed fund will pay about $98,000 in fees over the course their career. The same investor who uses Buffett’s method pays only about $27,000, less than a third, according to a study from NerdWallet.

This is helpful to know if you’re saving for retirement. Financial advisors have all sorts of ways of assessing fees, from charges for when you try to trade to penalties for not trading enough, meaning it’s important to read the fine print on your accounts. But a helpful number to know, if you have a 401(k) or IRA, for example, is your expense ratio, which might range from about 0.05% on passive index funds or ETFs (like those offered by Vanguard) to 1% or even higher on actively managed funds. Lower is always better.

Crucially, there’s a lesson for crypto investors here, too: Bitcoin transaction fees have been relentlessly skyrocketing as more and more users bought into the currency, as Ars Technica’s Timothy Lee noted, at one point in December topping $26 per transaction. Bitcoin fees are also very confusing, and vary wildly on different exchanges and in different countries. In the U.S., Coinbase typically charges a base rate of 4% on all transactions.

This, of course, isn’t to say bitcoin’s price growth won’t make up for it (at least in the short term) or that over the longer term, there won’t be other cryptocurrencies — like IOTA, which is designed differently so as to reduce the threat of ballooning transaction costs — that could end up overcoming this problem. And just as low-cost Vanguard ETFs let you buy diversified exposure to lots of different stocks at once, there will likely soon be an easier way to invest in a wide swathe of cryptocurrencies at a lower cost.

But until that day comes, Buffett’s big winning bet is a reminder that relatively narrow, high-cost speculative bets — the kinds made by hedge fund managers and hopeful crypto investors alike — are exciting and glamorous in the short run, but often lose their shine over longer periods.

That’s the biggest reason to avoid tying your long-term wealth to factors you can’t control — like bitcoin’s price — and instead focusing on what you can control: the fees you pay, the diversification of your assets, and your long-term savings goals. Once that is squared away? Then maybe you’ll have a little cash left over to gamble on a cryptocurrency.