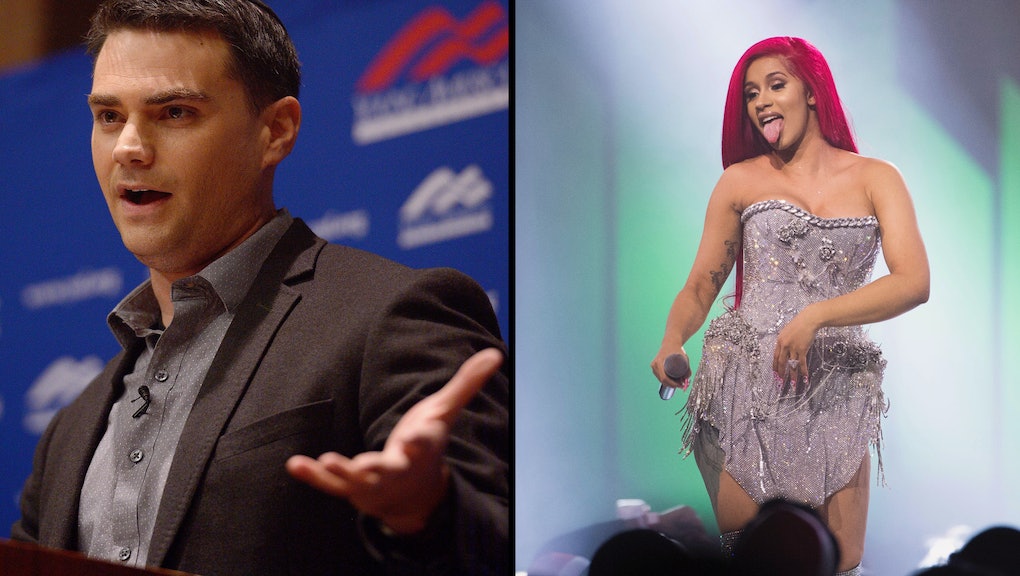 Former Breitbart editor-at-large and transphobic conservative pundit Ben Shapiro is known for analyzing politics, not hip-hop lyrics — and there’s a reason for that.

“Apparently there’s some lyrics to a song called ‘Bodak Yellow’. ... I’ve never heard of these things so that’s why I analyze them for you,” Shapiro explained. “If I haven’t heard of them, I assume that you haven’t either. Maybe I’m just uninformed.”

“Bodak Yellow” was one of the most popular songs of 2017, so, yeah, maybe Shapiro is just uninformed.

The song has become an anthem for female empowerment, and on Saturday, some Women’s March participants carried protest signs with lyrics from “Bodak Yellow” written on them.

This perplexed Shapiro and compelled him to watch the music video for the song while trying and failing to explain the track’s messaging to his audience. In the clip, he sounds like a painfully out of touch 34-year-old grandparent.

“One of the things I do like about this video is that she’s literally riding a camel in the middle of the Arabian desert. That is not a very empowered place,” Shapiro said after pointing out that Cardi B once worked as a stripper. “That’s not a place where strippers make a lot of money, in Saudi Arabia,” Shapiro added.

Actually, the video’s desert scene was shot in Dubai, which does have strict laws and customs governing women’s attire, but Cardi doesn’t dance now. She “makes money moves.”

Nevertheless, Shapiro persisted with his corny, ill-informed, cringeworthy recital and breakdown of the following lyrics:

“I be in and out them banks so much I know they’re tired of me/ Honestly, don’t give a fuck ‘bout who ain’t fond of me/ Dropped two mix tapes in six months, what bitch working as hard as me?”

“So she has a work ethic, so that’s good,” Shapiro said.

“So now it seems like she’s getting aggressive with other women,” Shapiro added. “I’m missing the part where this is all ‘female solidarity’ when she’s talking about how she’s competing with other women to take their men... If you’re obsessed with your own genitalia, then this is empowering to you.”

The message might not resonate with Shapiro, but Cardi B has been celebrated as a trailblazer among women because of her confidence and comfort in her own skin.

The empowering appeal of “Bodak Yellow” was perhaps best explained by Cardi herself during her August interview with the New York Times.

“Ever since I started using guys, I feel so much better about myself. I feel so damn powerful,” the rapper said.

Maybe Shapiro should leave the task of analyzing rap lyrics to Genius.