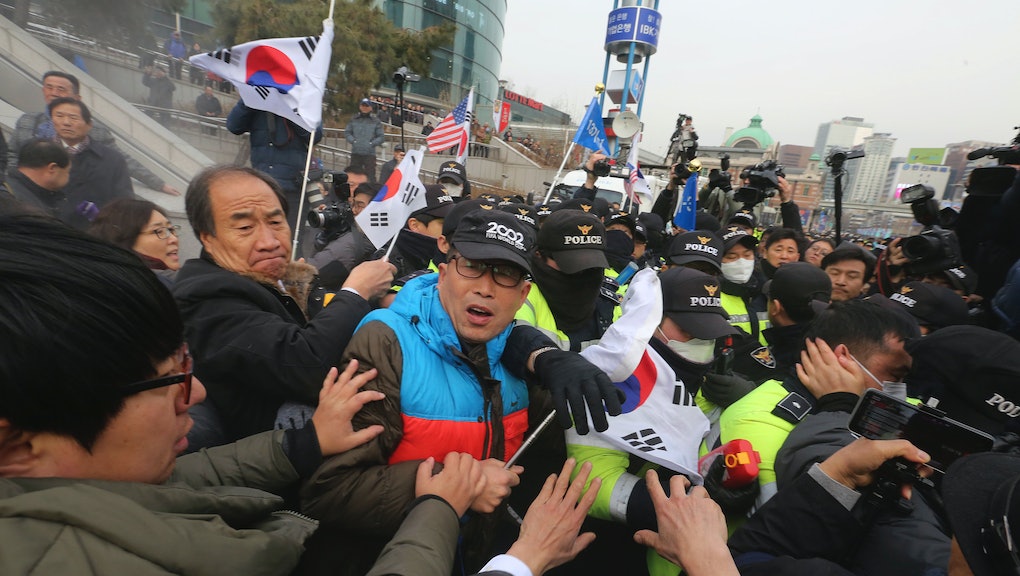 Not everyone is happy about North Korea at the Olympics. We asked South Koreans what they think.

After a decade of planning, South Korea is rapidly revising some of its itinerary for the winter Olympics in February — and not everyone’s pleased about it.

That’s because, as of Jan. 8, North Korea had officially agreed to send its athletes to the 2018 Pyeongchang games. The decision comes after months of heightened tension among the Koreas and the United States, including the now-infamous Aug. 8 incident when President Donald Trump threatened to rain “fire and fury” on North Korea.

It’s not clear why North Korea’s regime is having a sudden change of heart. But one thing is for certain: Feelings among South Koreans are mixed when it comes to President Moon Jae-in’s extensive hospitality to the North. In fact, some are now calling it the “Pyongyang Olympics.”

On Jan. 22, South Korean protesters set photos of North Korean leader Kim Jong Un on fire as North Korean singer and government representative Hyon Song Wol arrived to Seoul Station to scout locations for an Olympic performance by an 140-member North Korean orchestra. Others have spoken out against the two governments’ decisions to march under one unified flag, and a recent survey cited by Reuters suggests that only 4 out of 10 South Koreans polled actually support the flag.

Yet perhaps the most controversial of all is South Korea’s decision to combine its women’s ice hockey team with the North. The team’s goalie, Shin So-jung, publicly decried the forced merge, stating that the team is “frustrated and demoralized” during a Jan. 19 interview with The Chosun Ilbo.

But not everyone is that upset, it turns out. During some of the nation’s coldest weather in the last five decades, Mic asked five South Koreans to share their opinions on North Korea’s involvement in the upcoming Pyeongchang Olympics.

The following interviews have been translated from Korean to English and edited for clarity:

Mic: Some are angry that South Korea and North Korea will compete together on a combined women’s hockey team. How do you feel about it?

Kang Do-hyung: I’m fine with it. We should have our limits, but we also all have to keep our hearts open. Mine is. Besides, back in the day, South Korea’s president had an open policy toward North Korea. I feel positive about it.

How do you feel about the two countries using one unified flag?

KD: I think it’s OK to use the unified flag. I personally would like to see the image of North and South Korea together, hand in hand.

We were once a single, unified country, so I think it’s fine for us to gather as one and for [South Korea] to open its heart toward North Korea.

Will you go to the Pyeongchang Olympics?

KD: I want to go, but I sort of can’t afford it. But in Seoul, there’s a place where I can see the games on a large screen — I plan to watch it there.

How do you feel about the combined women’s ice hockey team?

Kang Ji-yoon: Very negatively. There was no mention of this hockey team beforehand — the government just told South Korea’s women’s ice hockey team to combine right away and they said it rather aggressively, without listening to any opinions. Doing something with North Korea is fine, but I’m mad about it being done with little notice.

Even in a situation where North and South Korea are in a good relationship, I think the government should prioritize South Korean athletes and be considerate to them first.

What about the unified flag?

KJ: My feelings about the flag are very negative. I don’t think it’s appropriate. We’re not a unified country yet … Also, it’s not our official flag. The government has zero plans of reunifying with North Korea soon, so I don’t get it. These countries are just pretending to be friendly to each other. I feel like the government is just manipulating the media.

Some have said that the flag controversy shows that many South Koreans are moving away from the goal of reuniting North and South Korea as one country. Do you want reunification?

KJ: It has been a while that we — North and South Korea — have been apart. There’s a big gap between the rich and the poor, and the lifestyles of our countries are very different. When we see pictures of North Korea, it’s like looking at South Korea in 1988. So I think reunification would just cause confusion — maintaining our current state would be much better.

Are you excited about the Olympics at all?

KJ: I’m not very excited. There were so many issues [that bothered me] — especially the issue with the women’s ice hockey team. Also, we’re not playing our national anthem, but “Arirang” instead. It’s all very weird.

What do you make of the combined women’s ice hockey team, with both North and South Korean players?

Lee Sang-cheon: It will give some relief to the tense relationship between North and South Korea. The problem is, the process of [collaborating with North Korea] has caused a lot of problems and upset in the South — especially with the women’s ice hockey town. I feel bad about that. I think this is necessary for holding a peaceful Olympics.

LS: Personally, I have almost no objection to using the unification flag because we have used it in the past.

Right now, the opposition party is criticizing the flag, but they once used the same unification flag when they were the ruling party. Their criticism is like saying, “If I do something, then it’s called a romance — but if you do it, it’s called having an affair.” I think it’s only natural to use the flag.

Do you want reunification?

LS: I think that we must eventually have reunification, and it will be difficult both now and in the future to close the economic gap between North and South Korea. South Korea will be hit hard economically. It should happen, but it will be hard — very hard.

Will you be going to the Olympics?

LS: I don’t think I’ll be able to. It’s expensive and there just isn’t enough time. I will show my support by watching TV.

What do you think about South Korea merging its women’s ice hockey team with the North?

Ahn Eun-seo: A small number of people should make the sacrifice for the larger group. The athletes of the South Korean ice hockey team feel angry about this — I understand, because it was done so suddenly. But in the long run, I think this is one of the ways to have the Olympics safely and peacefully.

AE: I think it’s unnecessary. The Olympics are being held in South Korea, so I don’t really like the idea [of a unified flag]. North Korean athletes will participate in the games mostly as representatives of their own country — which is North Korea. So I don’t think there’s really a use to the unified flag.

AE: Life isn’t easy now. After reunification, I think it would be worse.

How do you feel about the women’s ice hockey team?

Kang Joon-mo: I think we have to participate in the Olympics together. In the past, we’ve used the Olympics as an effort to halt the war. So we should do it again, together.

As for the flag, there should be something we can have in common to represent both North and South Korea. If we play together, a unified symbol is necessary.

Are you for reunification?

KJ: It should be done someday. But if it’s done immediately, there might be a big economic shock, so step-by-step reunification is needed. But these steps should be coming from both North and South Korea, and North Korea should seek a common understanding with neighboring countries.

We should cooperate, little by little, and make sure the nuclear issue is decided on. But in the long run, I think we should unify.

How do you feel about the combined ice hockey team?

Kwak Joon-young: I feel good about it. The relationship between North and South Korea isn’t great, but the Olympics offers a chance or a place where we can become one. So, during those moments, we should just put aside the complicated relationship we have.

KJ: Truthfully, this is a really sensitive issue for us. I feel like I can’t speak for others on it, but it is true that the unified flag won’t be a good sight for some South Koreans.

However, North and South Korea using a single flag alludes to some sort of reconciliation, and I think it suggests we can move in the direction [of peace] a little further.

Will you be going to Pyeongchang?

KJ: I’ll actually be working in an Olympic village restaurant during the games.