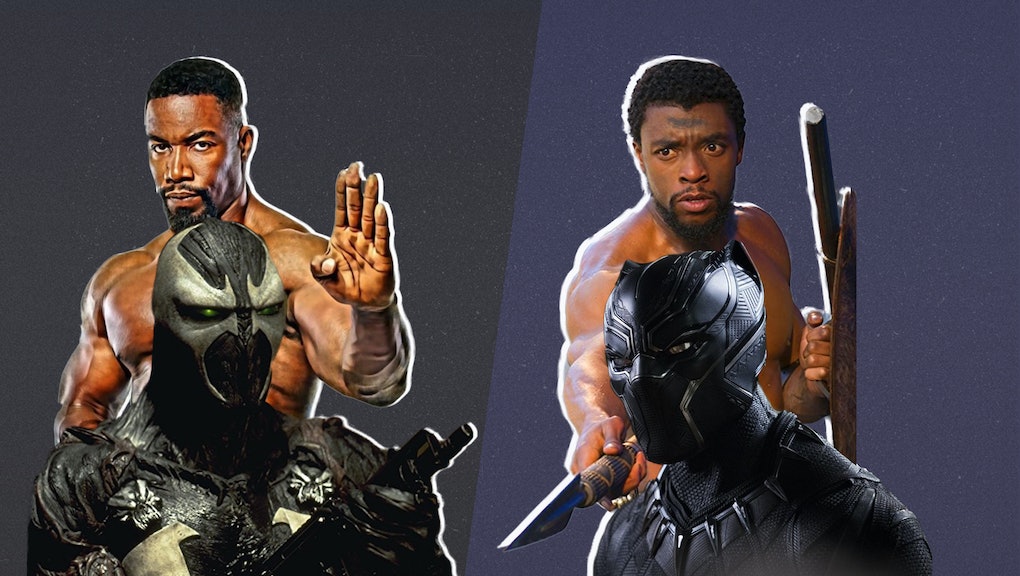 But the hero of Black Dynamite, who recently announced he’s suiting up for a follow up to the 2009 blaxpoitation spoof, clearly isn’t holding a grudge.

“I’m really hoping Black Panther does well, if not only for the camaraderie [with] my neighbor,” the actor told Mic during a recent phone interview.

White, the 50-year-old, pioneering, black action movie icon and married father of five, said he’s already made plans to see the new film with his wife and their three youngest children the first day it hits theaters nationwide, on Feb. 16.

“I’m super proud that this has come about,” White said. “When people used to ask me will there ever be a Black Panther movie, I was doubtful. I was wondering if we could get to a time where a major company would invest in something that would show an all-black cast with a black universe.”

Yet it was White’s groundbreaking role in Spawn in 1997 that will go down in history as the first portrayal of a major black comic book superhero on the big screen.

“That’s been a tremendous honor in my life,” White said. “I’m proud of Spawn because I played a character who happened to be black. I think by far that’s more impactful in the world. It shows [race] makes no difference. It’s about what the character does.”

Simmons’ soul is sent to hell to pay for his many crimes, but his talents as a killer are appreciated by Malebolgia, the film’s incarnation of the devil himself. The evil deity tricks Simmons into becoming the “Hellspawn” general of his demonic army, in exchange for allowing the undead mercenary to return to Earth and reunite with his beloved fiancée, Wanda Blake, played in the movie by Theresa Randle.

What the devil neglects to tell Simmons is that he’s returning him to Earth in his new horrifying form, five years after his death with no initial memory of their post-mortem arrangement. Simmons’ grief-stricken fiancée has already moved on — she’s married to and has a child with Simmons’ best friend, Terry Fitzgerald.

Warner Bros. Batman film franchise had already proven that many moviegoers had an appetite for more serious, adult superhero dramas, specifically with its first entry, directed by Tim Burton. Spawn proved mainstream white audiences would pay to see a black man wearing a crimson cape, even if the monstrous antihero’s skin color is incidental.

The CGI-heavy film cost $40 million to make, but earned more than $87 million worldwide, despite being panned by critics. The special effects certainly don’t measure up with today’s modern standards, but they helped pave the way for later films, according to White.

Spawn was predated by more comedic, campier black superhero films like 1994’s Blankman starring Damon Wayans, and Robert Townsend’s even cornier Meteor Man, which hit theaters in 1993. Tobar Mayo’s blaxploitation flick Abar, the First Black Superman (which was renamed In Your Face for its VHS release) broke the mold for black superheroes in 1977. And Shaquille O’Neill donned his own goofy costume to unintended comedic effect for Steel, released on Aug. 15, 1997, two weeks after Spawn opened nationwide.

But White was the first African-American to make being a black superhero actually look and feel cool.

“Spawn basically was this introduction to this CGI world and kind of really showed this computer graphics thing, the power of it,” White said. “I’m not a big fan of a lot of CG movies. Being that Spawn was one of the first ones, I’ve got kind of mixed emotions about that.”

Neither Blade nor Spawn delves into aspects of race and what it means to be black the way that director Ryan Coogler does in Black Panther. White said to him, that’s for the best.

“[Spawn] was fighting for the love of his family. That’s something that’s not black or white. That’s something universal,” the actor said. “Most of these characters I’ve played... were written as white people or written in a nondescript way that [race] doesn’t really matter. For me to be one of these people, that shows the world that it doesn’t matter.”

White himself is one of the few action stars with the fighting skills and physique to be a superhero in real life. At 6 feet 2 inches and roughly 235 pounds, he has earned black belts in eight different fighting styles and once claimed he could beat Bruce Lee in a real fight, to the chagrin of diehard Lee fans.

“Probably the thing I [most] regret ever saying in my life was telling non-fighters about me fighting Bruce Lee, a personal hero of mine and millions of people,” White said. “Real fighting is not like movie fighting. It would be very hard for Bruce Lee to fight a real fighter above 150 pounds. A 135-pound fighter will not beat a 235-pound fighter of similar skill. That’s crazy.”

As for who would win in a fictional fight between Black Panther and Spawn, White, wasn’t any less boastful.

“I think Spawn would win a fight because he’s beyond mortal and has armor and weapons as a part of his body,” the actor said. “But he’d certainly lose in the box office.”