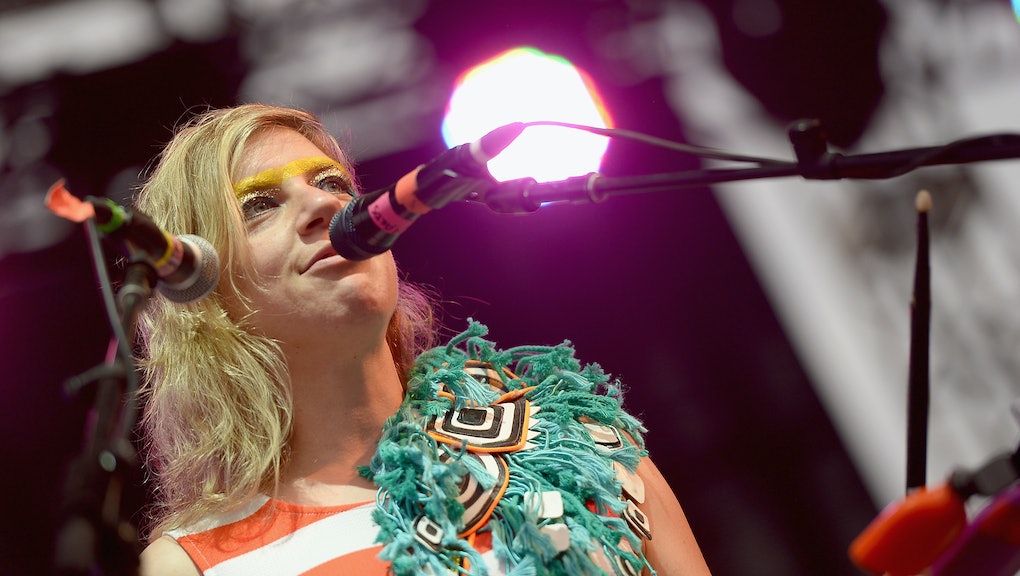 Tune-Yards on writing music that reckons with white privilege

For a decade, Merrill Garbus has been making brilliant music with bassist Nate Brenner under the name Tune-Yards. Her songs evoke all sorts of influences colliding abstractly — if you stuffed Captain Beefheart and Nina Simone into a clown car with a ukulele, a loop pedal and a jagged array of percussion and synthesizers, you’d be close, but you’d still have to account for the studied Mbuti chanting.

Aside from the sounds, there’s also the subject matter: Garbus’ lyrics have found striking intersections between sex and violence (on 2011’s “Riotriot” she fantasizes about the cop arresting her brother) as well as metaphors for colonialism (see 2014’s richly wordy “Water Fountain”) and some feminist chants that are just plain simple (“Not gonna say yes when what I really mean is no,” goes 2014’s “Manchild”).

Her brash, brave, funky music won Tune-yards top honors in the Village Voice Pazz & Jop Critics Poll for its second album, 2011’s Whokill, and it just recently released its fourth album, I Can Feel You Creep Into My Private Life. As you’d imagine from the mouthful of a title, Garbus spends as much time as ever trying to figure out her own role as a white woman in dismantling the power structure on self-explanatory songs like “Colonizer.” Mic recently spoke to her via phone to elaborate on some of the most powerfully self-critical music being made today.

Mic: The title of the new record is almost uncomfortably direct; I read once that the most effective insult you could say to a man is that he’s creepy.

Merrill Garbus: Ahh, interesting. [Laughs.] I do not read reviews generally, but I’ve been seeing that one of the things journalists have been picking up on is some connection to the #MeToo movement, and that wasn’t happening when I wrote the title. But it was a title that felt like it could hit several different nerves at the same time.

Since you’ve been releasing Tune-Yards albums, have you felt specific invasions of your private life that have led you to change what you make public?

MG: What’s interesting is I’m absolutely choosing to have my private life be under examination when I make music publicly. We’re living in a callout culture, so in a lot of ways it’s a lot easier to look at someone else’s wrongdoings than to look at ourselves and name that publicly. I’m talking about racism. I’m also calling me out for my own sexism, how we as women are insensitive to trans people as women. How we grew up as a patriarchy and therefore we’re going to also have our own patriarchal tendencies as women. Not focusing on making enemies out of others, but how these things manifest in me, and I don’t even see them until I slow down.

Many of your lyrics deal with a person’s conscience in that regard, like “ABC 123” seems to particularly concern a white person coming to terms with their culpability in the power structure. And a lot has happened since your last album [2014’s Nikki Nack].

MG: [Laughs.] A lot has happened. People who love me accuse me of being too hard on myself a lot, because I’m extra self-critical and perfectionistic on things. But I think there are ways that can be helpful. Now we’re probably the most successful that we’ve ever been as a band, and I need to own that we make music that would not exist without music from the African diaspora, music from African-American culture in this country, blues, R&B, rock, hip-hop, on and on and on.

And I need to own my role doing that as a white person and the power structures that are involved. The reason why we are talking about Colin Kaepernick and Black Lives Matter is all the work of very skilled organizers. [It’s] not that police violence had increased, police violence stayed the same. That’s what was happening during the Nikki Nack tour: Eric Garner, Philando Castile. #SayHerName. This was all organizers doing the work of putting this in our faces, and there I was having released this album very influenced by Haitian music.

I’ve been talking about my role in cultural appropriation maybe not so skillfully since the beginning of Tune-Yards, but that moment was one of the first where I was like, “Is this enough?” Is it enough that the lyrics of this song are very vaguely grappling with my role as a white person in this world? I don’t think that is enough anymore. I can’t stop making music, so how can I do it and feel like I’m doing harm as little as possible?

Did that affect the decision to focus more on synths and American electronic music with this record than, say, the Mbuti-influenced chanting on [2014’s] “Rocking Chair” or [2009’s] “Hatari?”

MG: I just got asked that question and I didn’t know how to answer it because so many of these things happen intuitively. It’s interesting that you say that about “Rocking Chair” because I think that was just as much my old-timey roots and that’s where it gets interesting. All those things are influenced by all different types of African music, and then the music from the American Appalachians, for instance, which has a direct connection to slaves coming in from West Africa, and yet at this point we would describe that as country music, or as a “white” art form.

I wanted to explore electronic music because the EDM world is especially white-male-led. Even though the stars that get paid so much money are white men, it [originated] from queer dance clubs and queer DJ collectives and people of color.

MG: Absolutely, as much as I would like it not to be. I was having this conversation and literally heard myself talking on the outside, about my interactions with Kenyan men.

It seemed unusually literal for you, but that’s apparent all over this album. I’m not sure I know many songs like “ABC 123” that actually contain the word “vote.”

MG: I was talking about that song the other day, and being like, “I don’t want to write these songs!” I don’t even know anything. “No abstentions, vote!” I don’t know, should we vote? I think so, but what do I know? Do I want to write a song [like “ABC 123”] that has the words “white centrality” in it? Or do I want to sing these songs that are so sickeningly literal? It’s not my favorite thing to sing, and yet I feel compelled to sing it. It feels like there’s no time to dance around things, lyrically at least.

Having the phrase “white centrality” in your single sticks out so much it may make someone Google it long after they’ve stopped dancing to it.

MG: I’ve learned over this past year from brilliant people who’ve really helped me to understand. I think it’s just like… as white people — I assume you’re white. Are you white?

One of the lines that really resonated with me on this album is “Honesty gone/ Didn’t know right from wrong,” particularly because of all the debate surrounding the Aziz Ansari incident on my social media regarding consent, and the collective realization that men didn’t know as much as we thought we did.

MG: Right, how do we heed the call to do the work on ourselves, versus defensiveness, anger, shame? These are concepts around white fragility that I’ve learned about these past couple years, these tendencies. I’m sure a lot of those same patterns apply to anyone being called out around misogyny or sexual harassment. Our first reaction when accused of something is just shutting the fuck down. That’s what I want to work on, a really deep level of empathy, so that I’m not just trying to say the right thing but also asking awkward questions. I’m noticing men are asking me different questions: “Is it OK if I give you a hug?” It’s really fascinating.

You’ve started to notice the change in behavior in tandem with #MeToo?

MG: Definitely the [changes in] male behavior has been around #MeToo. That’s what I’ve really valued in the teachers I’ve had over this past year, being given a toolbox, otherwise I’m just going around with all this fear and shame. I think white people should go to white people school, learn what whiteness is and where it comes from. Same with men, I think there needs to be training and a real comprehensive understanding that this is not just about being called out and this is not just about angry feminists. This is a real call for change, that people need more tools around.

There are a few statistics in the lyrics to “Who Are You” — did lines like “The science is cool/ 23 percent as a general rule” come from real numbers?

MG: They did come from real numbers. I didn’t specify which in the song, but just the idea of just being confronted with devastating statistics on a daily basis, like levels of incarceration among black men and species that won’t be in existence in 15 years, a variety of devastation. There’s a lot to do with grief on this album and how we process grief, aside from, “Ah, fuck it, the world’s going to end, let’s just party.” It’s a privilege to be overwhelmed and use that as an excuse for paralysis instead of action. But overwhelm is real, so where are the tools?

Speaking of action, I wanted to ask about your experience writing the song “Action” for Mavis Staples [from 2016’s Livin’ on a High Note], one of pop’s original civil rights movement leaders.

MG: It was a really amazing experience, though I still don’t know how I feel about it. I feel really grateful for the opportunity. I don’t want to pretend to know a black perspective. I’m proud of it, but I don’t want to sing that song. That’s not my song, it’s Mavis’ song, and it brings to mind other white songwriters who have written for black artists, which is very… It gives me a discomfort in my stomach. But it’s interesting.

There are lyrics on your new album that definitely feel informed by the Staple Singers and the ‘60s protest era: “Don’t tell me I’m free,” “We let freedom ring, but whose freedom?”

MG: Yeah, that’s all in there. It’s interesting to learn the history of abolitionists, white people’s role in all of these movements, and where we don’t fit in.

Is there a song on the new album that’s extra meaningful for you?

MG: “Hammer” has the lines “I am not the woman that you think I am/ I swallow up a mountain and I’m quiet as a clam/ Saturday and Sunday in the poison air/ Oh, and every day I work I help to put the poison there.” That really encapsulated my experience of feeling pretty smothered and having my hands being tied as a human living in 2018. And the rest of the album is me trying to move through it.