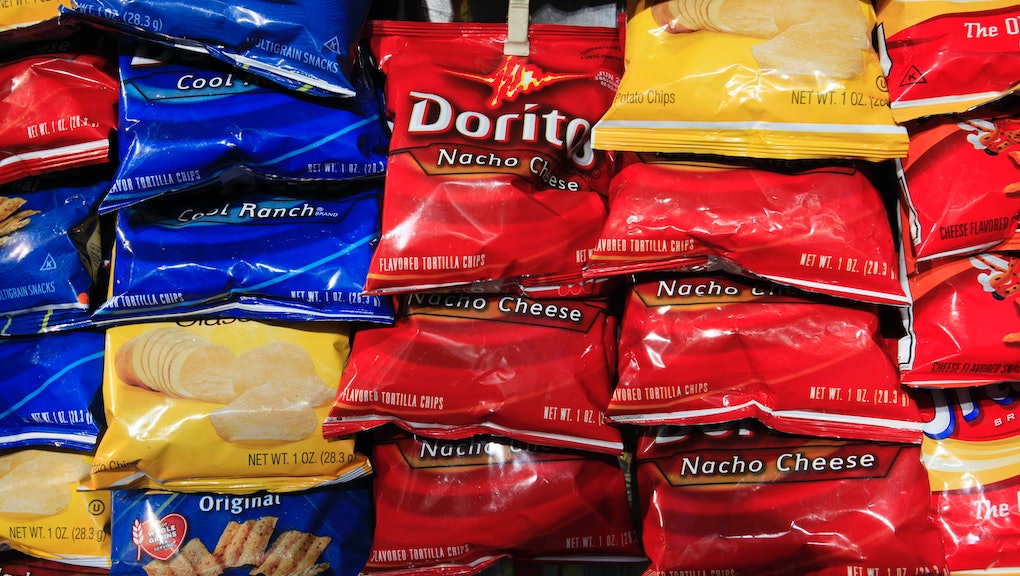 Doritos isn’t to blame for gendering foods. We are.

Let’s get one thing out of the way: Doritos is not making a female-friendly “quiet” potato chip.

Earlier this week, PepsiCo CEO Indra Nooyi joined Freakonomics Radio for an episode of The Secret Life of CEOs. Host Stephen Dubner asked her, “How do men and women eat potato chips differently?” Though most people would respond, “they don’t, because they both just put them in their mouths and swallow them,” Nooyi gave a more detailed, nuanced and key-word friendly response.

“As you watch a lot of the young guys eat the chips, they love their Doritos, and they lick their fingers with great glee, and when they reach the bottom of the bag they pour the little broken pieces into their mouth, because they don’t want to lose that taste of the flavor, and the broken chips in the bottom,” she said. “Women I think would love to do the same, but they don’t. They don’t like to crunch too loudly in public. And they don’t lick their fingers generously and they don’t like to pour the little broken pieces and the flavor into their mouth.”

Dubner asked her if the company was planning to make a male and female version of the snack. She replied, “It’s not a male and female as much as, ‘Are there snacks for women that can be designed and packaged differently?’ And yes, we are looking at it, and we’re getting ready to launch a bunch of them soon. For women, low-crunch, the full taste profile, not have so much of the flavor stick on the fingers, and how can you put it in a purse? Because women love to carry a snack in their purse.”

Social media caught wind of the quotes and latched on so hard that the company actually had to offer a retraction.

“We already have Doritos for women — they’re called Doritos, and they’re enjoyed by millions of people every day,” the company said in a statement. “At the same time, we know needs and preferences continue to evolve, and we’re always looking for new ways to engage and delight our consumers.”

Of course, PepsiCo wouldn’t be the first company to create a ridiculous product geared toward women (looking at you, Bic lady pens). But, the only issue with this retraction is that Nooyi wasn’t actually wrong in explaining gender preferences for food. And as much as we’d like to believe our food choices don’t come down to gender stereotypes, they do — at least, according to scientific research.

“Instead of looking at biological gender man versus woman, we look at the idea of masculinity versus femininity,” Luke Zhu, assistant professor in the department of business administration at the University of Manitoba, said in an interview.

Zhu’s research “Macho Nachos,” which was published in the journal Social Psychology, examined the decisions men and women make around food solely based on their own implicit bias. And, according to his findings, Nooyi’s comments about packaging foods to appeal to men and women differently were spot on for the CEO of a major food company looking to sell more products.

“If you think of yourself as a macho man who will only eat red meat because that’s a sign of strength, that’s consistent with how you see yourself.”

As Zhu explained, his research team asked 93 adults to decide which foods they thought to be masculine and feminine: baked chicken versus fried chicken, baked potatoes versus french fries, light potato chips versus regular potato chips and baked fish versus fried fish. The results showed that there was a significant tie to food and gender perception. Participants, the study showed, were more likely to see the less healthful options as masculine. Conversely, study participants were far more likely to list the healthy options (baked chicken, baked potato, light potato chips) as feminine.

The team also ran an experiment on the group where they packaged the same muffin several different ways. One muffin came with a “masculine” stereotypes on the label (it was called “mega muffin” with a photo of a football player) another with “feminine” stereotypes (it came with a ballerina), a gender-neutral option, and another set to confuse the consumer. In that confusing set, one muffin came with a ballerina and the word “mega” and the other with a football player and the word “healthy.”

And beyond purchasing food, Zhu’s team found that people literally thought food tasted worse when it was packaged in the mixed-gender packaging.

“In these inconsistent conditions they think the same food doesn’t taste as good,” Zhu said.

So really, it’s not Doritos fault that we like the gender stereotypes extend to food. It’s ours.

“The choice that people make about what they eat sometimes is related to how they think about themselves,” Zhu said. “If you think of yourself as a macho man who will only eat red meat because that’s a sign of strength, that’s consistent with how you see yourself.”

Really, Zhu explained, all Doritos and other companies marketing gendered foods are doing is taking advantage of our own internal and external biases. Zhu added, not only would marketing and stereotypes have to be upended to make food gendering change, but we’d all individually have to change our own internal thought processes as well.

As Zhu noted, people often think they take all factors into consideration when making a decision. However, more often than not decisions are made in milliseconds, and “in those cases we tend to base our decision making on heuristics.” He added, “Here is when stereotypes kick in and here is when biases kick in and this is a very concrete example of that. Here we show that, the way you think about gender has a huge influence on what you choose to eat next.”