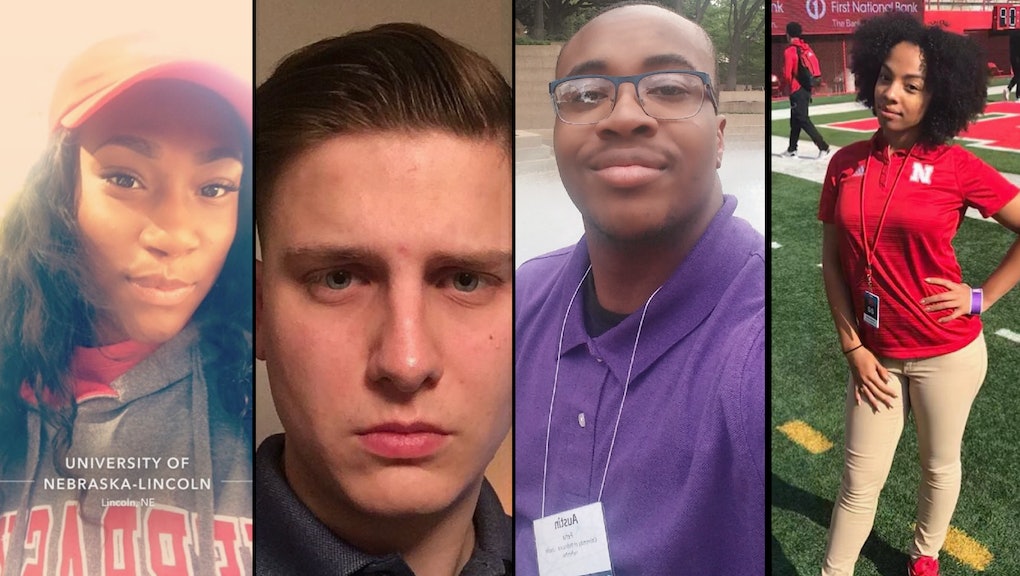 University of Nebraska-Lincoln’s student government is hosting a “Hate Will Never Win” rally Wednesday to send a message of defiance to their fellow Cornhusker, a self-described white nationalist named Daniel Kleve.

The action is just the latest in a string of events over the last nine days that started when a video of Kleve talking about his racist views and lust for violence went viral Feb. 5. On Saturday, the UNL men’s basketball team wore matching “Hate Will Never Win” T-shirts in response to the controversy. Other UNL students hosted their own town-hall-style meeting Tuesday to discuss ways to address the situation on campus.

“Just because I dress like a normie, a presentable person, doesn’t mean that I don’t love violence,” Kleve said in one of the Google Hangout videos leaked by the antifascist activist group Antifa Nebraska. “I want to be violent. Trust me. Really violent. It’s just not the right time. We need to build ourselves up. We need to be disciplined. We need to train ourselves and make ourselves hard ... so that when the time comes, we can do what needs to be done.”

Since Feb. 5, pictures have resurfaced showing Kleve standing with white supremacist members of Vanguard America as they beat a man Aug. 12 during the infamous “Unite the Right” rally in Charlottesville, Virginia. James Alex Fields, the suspect in the car attack that killed 32-year-old Heather Heyer the same day, was also photographed carrying a Vanguard-provided shield.

Another video shows Kleve talking about wanting to shoot a “Nigerian dude” who previously asked him about his “Pagan tattoos.”

An Antifa Nebraska activist named Nestor said in an interview that his organization has been monitoring Kleve’s activities for about a year and had sent leaked pictures and screenshots from Kleve’s now-private social media accounts to UNL administrators six months ago. Nestor, who is also a student at the school, said his group went public with the videos because the school refused to do anything about Kleve. Some of the leaked images show Kleve posting threatening messages to Jewish people, using racial slurs and stereotypical memes.

“We’ve been trying to bring this issue up for six months now. UNL didn’t take any action,” Nestor said Tuesday. “They’re walking this really fine line where they’re saying, ‘He’s not doing anything wrong. We can’t prove this. We can’t prove that.’”

According to Nestor, one of Kleve’s posts read “Happy James Earl Ray Day,” celebrating the man who assassinated Dr. Martin Luther King Jr. In another post-Charlottesville post, Kleve announced his plans to “create the biggest far-right presence in Nebraska since the days of the [Ku Klux] Klan.”

UNL administrators have hosted multiple town hall meetings in recent days allowing students to express their concerns about Kleve. The school has refused to expel him, however, even though other universities have expelled students for espousing similar racist rhetoric.

It’s a free speech debate colleges seem to be facing in greater numbers since President Donald Trump’s election. Far-right personalities like Milo Yiannopoulos, Richard Spencer and others have been barred from speaking on college campuses by progressive activists and anti-fascist demonstrators. Accusations of suppressing free speech have compelled universities to balance protecting conservative speech and keeping students safe from far-right extremists.

“Every school has their own code of conduct that they deal with,” UNL’s interim director of the Jackie Gaughan Multicultural Center Charlie Foster said in a phone interview. “If they don’t make direct threats, there’s very little we can do about that. I go to sleep at night and wake up thinking about the safety of our students ... But First Amendment rights have to be taken seriously.”

Kleve’s rhetoric and presence on campus have many students saying they fear he’s a ticking time bomb. Nestor and other UNL students believe Kleve’s remarks about violence meet the threshold for being considered threatening. Multiple students have called out the school’s reaction on social media.

“They aren’t taking our safety seriously, in my opinion,” UNL student Kyiia Rollag said in an interview. “I am worried, though, that if [Kleve] does get expelled, then he might retaliate. It’s scary because he looks like the majority [of students] at my school so I wouldn’t be able to recognize him. Plus, it is not certain how many followers he has recruited already.”

UNL junior Unek Langford wasn’t sure how to react when she first saw Kleve’s video. She had previously seen around campus posters with his face warning students of color and Muslims about him.

“They were just basically saying be safe,” Langford, a black, 20-year-old ethnic studies major, said. “After Trump’s election, people were already acting weird on campus. I was like, ‘As long as he’s minding his business, I’m minding mine.’”

Kleve’s remarks were disturbing for Austin Peña, a UNL senior and president of the school’s Afrikan People’s Union, who said he’s encountered the same rhetoric before.

“We’ve all had some type of situation that’s like this,” Peña said in a phone interview regarding other UNL students of color. “During my freshmen year in 2014, there was a similar incident where a racist student posted a video. They basically said they don’t want us on campus. We see videos from other campuses and them dealing with stuff like that. This was probably the first time in a while we saw it on our campus.”

According to the Anti-Defamation League, Kleve and other white nationalist organizers have amplified their activities at colleges across the country since September 2016, the final few months of Trump’s successful White House bid. Since then, there have been 346 confirmed reports of “white supremacist propaganda” being found on university grounds.

White nationalists like Kleve killed 18 Americans in 2017, more than any other extremist group, including the Islamic state and Al Qaeda. Their victims included black men like U.S. Army 2nd Lt. Richard Collins III and Timothy Caughman, who were fatally stabbed at random by white men with self-avowed or alleged alt-right ties.

In recent days, Kleve has posted multiple videos on his YouTube channel claiming the viral video released by Antifa Nebraska was edited to make him seem like a “Hollywood villain” and “domestic terrorist,” adding that he and other white nationalists are the ones being victimized.