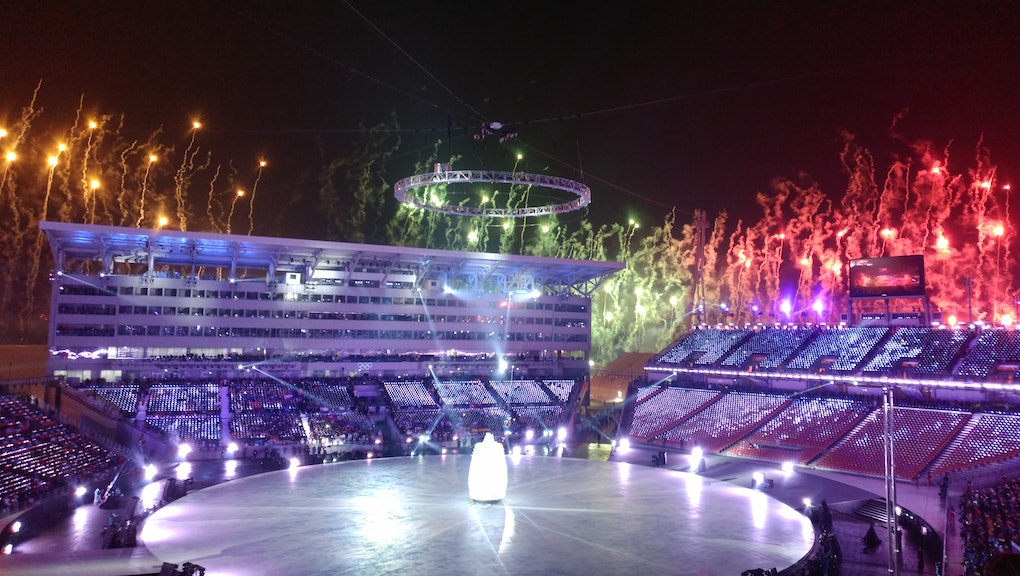 What you didn’t see on TV: An insider’s look at what was happening at the Olympics opening ceremony

PYEONGCHANG, South Korea — As spectators filed into their seats for the Pyeongchang Olympics’ opening ceremony, a small cluster of North Koreans sang and waved the unity flag. They were the loudest cheerleaders that night — and their mere presence was one of several symbols of peace in a ceremony with unprecedented political arrangements.

For the first time since the Korean War, North Korea sent a member of the ruling Kim family to the South. Kim Yo Jong, the sister of North Korean leader Kim Jong Un, sat only inches from U.S. Vice President Mike Pence. Even so, the two failed to shake hands.

Nevertheless, Kim’s visit “shows that North and South Korea, at one level of government, are always willing to engage,” said C. Harrison Kim, an assistant professor at the University of Hawaii at Manoa who researches the Koreas. “Kim Yo Jong does not represent the North Korean military or the party, but in a sort of nonpolitical spirit, [this shows a] continuous desire for better engagement and dialogue.”

But outside of the major officials’ silver window box looming over the ceremony, a show with incredible artistry boomed in the stadium. Here’s an on-the-ground look at what happened.

Pyeongchang looked empty for most of the day

The day of the Pyeongchang Olympic’s opening ceremony started quietly. People squabbled over the rare taxi from Jinbu station — the closest port to the Olympic stadium — and wandered to the Pyeongchang Olympic Plaza. There, a park filled with elaborate snow sculptures looked mostly empty. Restaurants with new, English-friendly menus opened their doors, and street stalls offered free Korean pastries.

Much of the afternoon commotion, however, came from a few stray evangelists and anti-North Korea protesters. They were only drowned out by the sounds of festive traditional drums or a parade float cheering on South Korea’s team.

The Olympic stadium’s 35,000 seats appeared almost full by the opening ceremony’s pre-show, when an awkward performance tried to teach the audience how to count down from 10 in Korean. Next a taekwondo show featured North and South Korean black belts roundhouse-kicking wooden boards down a line, prompting the North Korean cheerleaders to scream and waved their flags in synchrony yet again. In the beginning, they were largely alone in that cheering — like a loud, squared-off corner tucked away in a largely silent stadium. But the crowd eventually warmed up.

“The Olympics is the one time that the world is at peace together, especially with North Korea joining South Koreans,” Jennifer Nelson, a traveling volunteer from Philadelphia, said after the ceremony. “You could really feel that today. There was definitely an excited mood here.”

The peace imagery was piled on thick

Once a douse of fireworks shot off to launch the opening ceremony, screens around the stadium let three words sink in: “Land of Peace.”

Those words, no doubt, alluded to two things South Korea wants the world to know: that it’s a safe country to visit and that it’s hopefully entering a new chapter with North Korea. It was likely planned months (if not years) before North Korea agreed to join the games, but one of the images South Korea’s still trying to shake is the impression that it’s a dangerous warzone.

“I think seeing Korea united and walking as one, that was really exciting for me,” Kayla Corcoran, a professional translator from Missouri, said after the ceremony. “I know it’s just [a show], but it was really moving.”

The theme was certainly fitting. The crowd roared when South Korean President Moon Jae-in appeared — and it completely lost it when North and South Korea marched out into the stadium under one unified flag. But by the end of the show, South Korea had pitched forth the “peace” cliché so much that no one could miss the message.

“The best moment was when North and South Korea came on with one flag — it was beautiful. I wanted to cry,” said Rhonda Desjardins, a spectator from Alberta, Canada. “It was incredible — amazing.”

As the head of the 2018 Olympics’ organizing committee, Lee Hee-beom, put it: Pyeongchang is “above all, a peace Olympics.”

The opening ceremony showed a clear, two-part progression from South Korea’s roots to its metropolitan reality today. One of the first characters to emerge on stage was a massive white tiger with lines drawn as brushstrokes, its feet manned by several performing puppeteers. Mythical creatures and people in traditional clothing poured out next as they pounded on old war drums.

All of that was in stark contrast to the latter half of the ceremony, where lines symbolizing network connections were projected onto the stage to the tech and computer-like sounds. People who looked oddly like minions from Despicable Me breakdanced, and words like “future” and “dream” whizzed by on the stage floor. The most dominant imagery of this section was a South Korean boy climbing through a mysterious glowing door, only to emerge as an adult surgeon.

In one of the most obvious visuals, a video showed a sleek, futuristic car rolling by a centuries-old palace played on the monitor, reinforcing the idea of an “old and new Korea.”

It felt as though South Korea was updating its image since the 1988 Seoul Olympics, a time when the nation was just climbing out of postwar poverty. It was the nation’s first time hosting the Olympics — but now, Pyeongchang’s opening ceremony showed the world for that South Korea isn’t an underdog nation anymore.