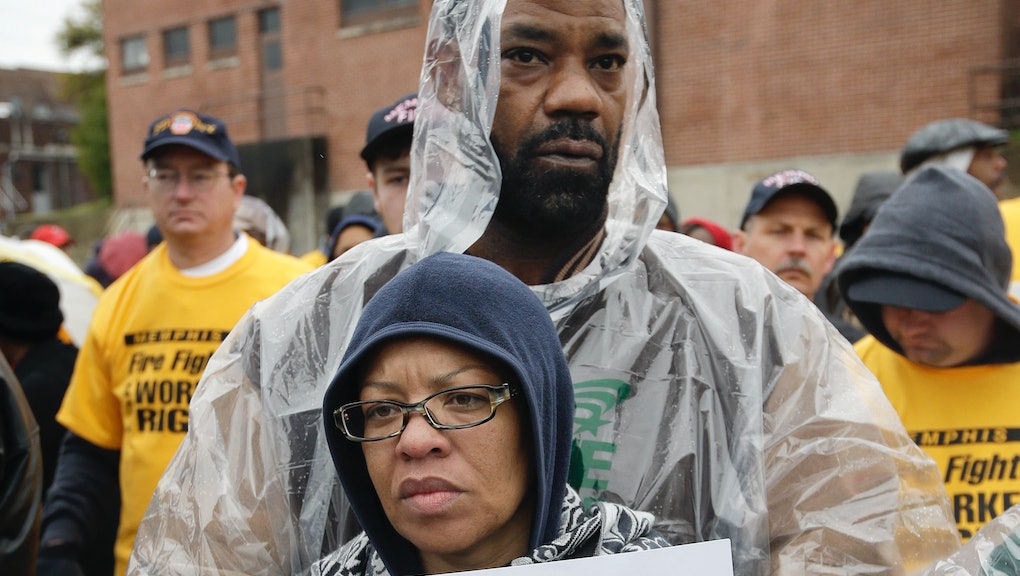 A decades-old fight against poverty and income inequality along racial lines has not died, says a national coalition of low-wage workers, clergy and civil rights leaders. On Monday, thousands of supporters are expected to help relaunch the Rev. Martin Luther King Jr.’s Poor People’s Campaign.

The fast-food labor movement, Fight for $15; Repairers of the Breach, a social justice organization founded by the Rev William. Barber; and the Kairos Center for Religions, Rights and Social Justice at Union Theological Seminary in New York City are among organizations supporting the effort. Along with events in Memphis on Monday, satellite rallies are planned in 30 states and Washington, D.C., according to organizers. The campaigners said supporters will engage in several weeks of civil disobedience nationwide. They intend to force elected leaders to adopt policies that promote unions, strengthen safety net programs and raise wages well above the poverty level.

“Five decades after our country declared a war on poverty, it now fights a war against the poor,” reads a statement by the Revs. William J. Barber II and Liz Theoharis, co-chairs of the new initiative, the Poor People’s Campaign: A National Call For Moral Revival.

“The systemic poverty and racism America faces today was not inevitable,” the statement continues. “It is the result of choices made by politicians and corporations.”

Organizers said they hoped a revival of the Poor People’s Campaign would be as historic as the Memphis sanitation workers’ strike that began 50 years ago on Monday. On Feb. 1, 1968, two black sanitation workers, Echol Cole and Robert Walker, were accidentally crushed to death by an old and malfunctioning garbage truck. The incident highlighted a long-standing grievance about inhumane working conditions, in addition to a low wages and benefits disparity between black and white employees.

What followed was a two-month strike by more than 1,300 of Memphis’ sanitation workers, most of them black. The men carried picketing signs that read “I Am A Man.” The sign became an iconic symbol of the civil rights movement because of workers’ assertion of their humanity. King lent his support to the strikers, joining them for a nonviolent march through Memphis, weeks before his assassination at the Lorraine Motel. At the end of the strike, the workers bargained collectively for better wages.

The original campaign was a push by King to link institutionalized racism to socio-economic disparities — and Memphis had been a lightning rod for that effort. But nearly 50 years since the late civil rights icon’s assassination, persistent gaps in livelihoods between whites and people of color means that King’s campaign remains unfinished business.

As the black-white income disparity remains stagnant and the wealth gap widens, the new Poor People’s Campaign aims to unite workers, faith leaders and activists from other movements around an agenda to shift the national conscience on issues of poverty and race, organizers say. That could prove difficult, given the current direction of the nation’s racial and financial policies.

In December, the Republican-led Congress passed tax cuts that benefit wealthy and middle class Americans who own homes far more than they benefit low-income Americans who are disproportionately nonwhite and renters. Next, the GOP could slash welfare programs to better afford the tax cuts.

“Now more than ever, working people need strong unions to fight back and win the good jobs and fair pay that workers of all races and backgrounds need to have a decent life,” Barber and Theoharis’ statement read.

Alongside the Poor People’s Campaign, groups such as the American Federation of State, County and Municipal Employees, the public workers union; the Church of God in Christ, a predominantly black protestant denomination; and the NFL Players Association will keep the “I Am A Man” sentiment alive with “I AM 2018.” The initiative will include voter education and civic engagement in low-income communities. The goal is to build an influential political base ahead of the 2018 midterm elections, organizers said.

The Poor People’s Campaign is in search of new blood to refocus the nation around income and other disparities. Terrence Wise, a McDonald’s employee from Kansas City, Missouri, is a willing recruit. Though he has worked steadily in fast food for 20 years, Wise, his fiancee and their three girls have struggled through periods of homelessness and an inability to keep the lights on.

When he reached a breaking point five years ago, Wise said he joined the Fight for $15, which, in 2012, began organizing strikes and mass walkouts of fast food workers across the country.

“I got my first raise a day after my first strike,” Wise, 38, said in a phone interview. “So that showed me that we were doing something right. So I started taking action.”

He went on to become a statewide organizer in Missouri for the Fight for $15, and assumes a similar role for the Poor People’s Campaign on Monday. “It’s a national call for a moral revival,” Wise said. “It really calls for the heart of America to open up. It’s time for Americans to organize and move against [inequality], to fight back.”