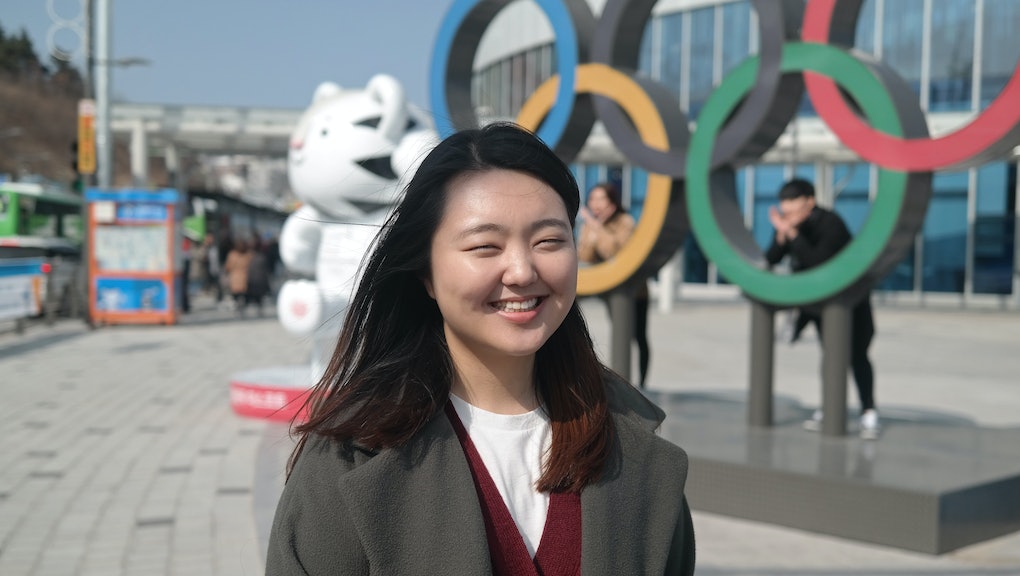 GANGNEUNG, South Korea — The Pyeongchang Olympics started with geopolitical fireworks: Images of North and South Korean athletes marching together at the opening ceremony were circulated around the globe — and they certainly enamored many. But with less than a week left in the games, much of the world is left wondering whether those messages of peace were sincere.

That’s partly because South Korean President Moon Jae-in has yet to accept a historic invitation to Pyongyang, which was delivered by Kim Jong Un’s younger sister, Kim Yo Jong. Moon is faced with a tough balancing act: Kim Yo Jong is the first member of North Korea’s ruling family to visit South Korea since the Korean War — and although that’s progress, post-Olympic dialogue is bound to come with political caveats.

Mic took to the streets of Gangneung — home to Olympic ice sporting events — and asked South Koreans what they think can, will or should happen next.

The following interviews have been translated, condensed and edited for clarity:

Were you happy to hear that Kim Jong Un’s sister, Kim Yo Jong, invited President Moon Jae-in to North Korea?

I don’t think it’s a good thing. Right now, many countries are becoming very serious and concerned about the nuclear issue, and it doesn’t make sense to send Kim Yo Jong to solve it. It’s not right. They should have sent a special envoy first, but they didn’t do anything like that. North Korea directly invited the [South Korean] government to Pyongyang, and it just doesn’t fit the situation.

Do you think Moon Jae-in should accept the invitation and go to Pyongyang?

We cannot accept the invitation. It’s totally unacceptable. We can’t go to Pyongyang without solving the nuclear issue first.

Do you get the sense that South Koreans care about North Korea’s attendance at these Olympics?

Aren’t we all interested in North Korea’s participation? As a South Korean citizen, it’s in our benefit to have North Korea participating in the Olympics. And as far as sports go, their involvement is totally welcome. But I don’t know yet if Kim Jong Un is trying to use the Olympics for his own political ends, and I’m very skeptical about [North Korea’s intentions].

So you don’t think North Korea just genuinely wants to be one with South Korea at these Olympics?

I have my doubts. I can’t say for sure, but North Korea and Kim Jong Un are lost in the fog again. They once belonged to the same nation as us, but I don’t know what they want. There are opinions going around, saying that this is clearly a political show, because North Korea’s attitude keeps changing day by day.

How did you feel when you found out that President Moon Jae-in received an official invitation to visit Pyongyang?

I was happy to see that. I think it’s a positive thing, that they were the first ones to make this gesture toward having a conversation.

Do you think Moon should accept the invitation and go?

Before he does that, there are some conditions that have to be met. We can’t just accept the invitation right away. I think we should wait and see for now.

Do you think South Koreans care that North Korea participated in Pyeongchang?

I think they care a lot about it.

Why do you think North Korea decided to join the Olympics so last minute?

They might be using us, but it also appears that they’re willing to talk and lead the conversation.

What do you think of North Korea’s invitation to Pyongyang?

North and South Korea don’t really get along, so it feels like there are many political ulterior motives. I’m not so pleased about the invitation.

Do you think the South Korean president should still go?

In the grand scheme of things for the nation, I suspect that there are some benefits to South Korea being invited there, and I think [the president] should go there. But personally, I don’t feel good about it. But of course, you can weigh in on political relationships from the perspective of international or national good, or just from an individual’s feelings.

Were you happy to hear that Kim Jong Un’s sister, Kim Yo Jong, invited President Moon Jae-in to North Korea?

Truthfully, I haven’t come up with my political read on the situation yet. But I hope that we do achieve unification between the two Koreas in the future, so continuous exchanges are overall a good thing.

Do you have a sense of how people your age — millennials — feel about the invitation?

Honestly, I think this issue needs more publicity. In the past, Koreans only really got their information on the North Korea issue from the government, and it was only whatever the government wanted to show us.

It’s best for the government to keep trying to capture their attention and wake them up to what’s going on. But at the same time, I’m a little skeptical about the idea of our government being too kind to North Korea, policy-wise.

How about North Korea’s involvement with the Olympics?

Most people my age have more negative feelings about this than me. There’s really not many other young people like me who truly want reunification. So, although they don’t really care about it that much, there are a few instances where, say, a North Korean athlete performs better than they thought they would — they do seem to care about that.

What do you think North Korea is trying to accomplish at the Pyeongchang Olympics?

What do you think about North Korea giving Moon an invitation to visit Pyongyang?

Considering our current situation with North Korea, I think it’s wrong [for Moon to go] right now. But this might mean that we don’t have to be invited again later. [A visit] could be done in the future. Things may change, depending on the situation at hand.

How do you feel about North Korea’s participation in the Pyeongchang Winter Olympics?

Personally, I think it’s a good thing for North Korea to participate. Those are my feelings as a South Korean citizen. This is because we are the same people, originally from one nation, and we should move toward the future together someday. We should keep talking to each other. I think this is an opportunity for some progress in our relationship.

Of course, North Korea might have taken part in the Olympics just to reduce some international pressure, but I still think the participation is a good idea.

Although their intentions are not pure, we must first teach each other for the sake of improving our relationship. Without first bumping shoulders, we cannot have conversation — and without conversation, we can’t do anything. Positive or negative, some kind of results will eventually be seen.