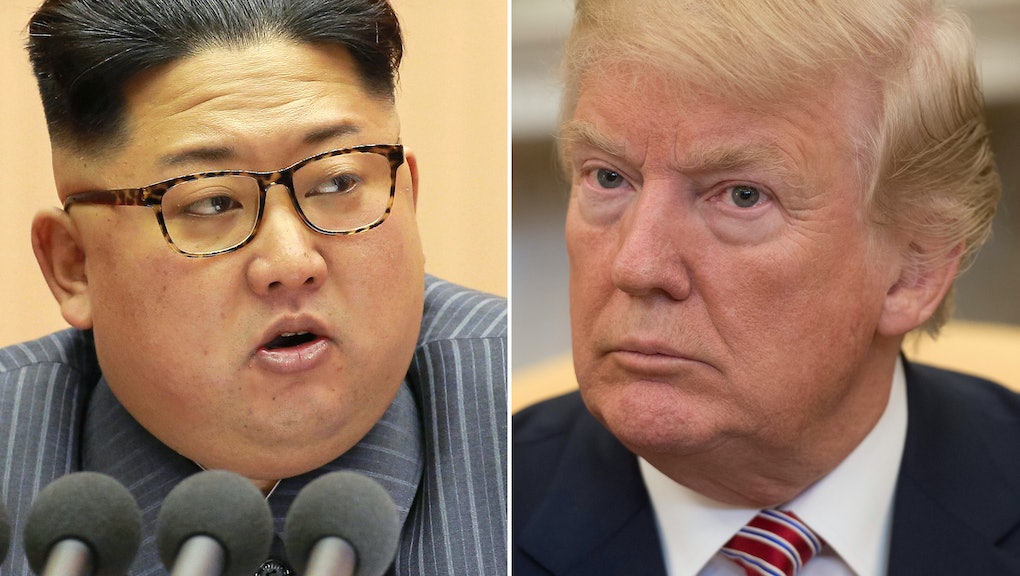 Up until January, North and South Korea were scraping by on nearly two years of cut contact. Missile tests had increasingly grave results, and President Donald Trump was threatening military action against North Korea as a consequence. The situation was so tense that the phrase “fear of miscalculation” became a popular term, with many worrying that Kim Jong Un would initiate attack if he took Trump’s threats seriously. Basically, nothing appeared to be going in the direction of peace.

But then a perplexing flurry of diplomacy took shape on the Korean peninsula: In January, phone lines were restored between the North and South. North Korea agreed to send a delegation for the Pyeongchang Winter Olympics in February, where athletes from both nations marched under the same flag. Kim Jong Un’s sister met face-to-face with South Korean President Moon Jae-in and hand-delivered an invitation for Moon to visit Pyongyang, the North’s capital. Moon sent a 10-person South Korean delegation at the beginning of March.

Now, in a turn of events that are leaving many surprised and confused, Trump has agreed to meet Kim Jong Un in person this coming May.

“I was expecting things to gradually get worse and more unpredictable and potentially more violence, but it’s actually been quite the reverse,” said Peter Ward, a columnist for NKNews in Seoul, South Korea, and a former researcher at the think tank Asan Institute. “President Moon has been a master diplomat in the last two months and Kim Jong Un has played a not-particularly-good hand very, very well.”

Here’s what you need to know to understand the upcoming May summit:

We’ve come close to this moment before

The May meeting between Trump and Kim Jong Un — if it actually happens — will be the first time in history that a U.S. president met directly with a North Korean leader from the Kim family. Already, history was made when Kim’s sister Kim Yo Jong touched ground in South Korea for the 2018 Pyeongchang Winter Olympics. Before that, no member of the Kim family had gone to the South since the Korean War armistice, signed in 1953.

But we’ve had a moment somewhat like this before. In 2000, then-South Korean President Kim Dae Jung (who is known for his “sunshine” aid policies toward North Korea) met Kim Jong Il in Pyongyang. At the time, Kim Dae Jung hoped that the two Koreas would “proceed together on a path of reconciliation and cooperation.” They smiled, shook hands and clinked champagne glasses in a visit that the Guardian said demonstrated “surprising warmth and good humor.”

Then, about two months later, U.S. Secretary of State Madeleine Albright met Kim Jong Il in Pyongyang — another batch of talks that were lauded as “historic” at the time, with more champagne and handshakes and even a diplomatic basketball signed by Michael Jordan.

“That was a big event for us watchers of current events, and we actually thought that many positive changes were going to happen. It was such a strange and yet such a hopeful moment,” C. Harrison Kim, an assistant professor at the University of Hawaii at Manoa who conducts research on North Korea, said by phone. “Of course, the outcome turned out to be pretty negligible.”

In short, “Things fell apart,” Kim explained. The United States promised North Korea security, along with new funds for fuel and food under the 1994 Agreed Framework — so long as North Korea agreed to halt its nuclear program. But the aid was slow in coming, and the U.S. eventually learned that North Korea was still enriching uranium to make nuclear bombs. By 2002, the agreement was over and to some, the diplomatic hoopla appeared completely fruitless.

“North Korea’s nuclear push continued and any kind of aid or infrastructure support didn’t come from the U.S. Hostility [from the U.S.] in the Middle East also pushed North Korea not to give up nuclear weapons,” Kim said. “That was a frightening moment for North Korea at the time.”

“The U.S. Congress dragged their feet [with promised aid], but it was really the North Koreans acting in bad faith,” Ward added. “That was the primary cause of the breaking down of the Agreed Framework.”

Per usual, Trump is doing his own thing

Some have characterized the proposed May summit as a sign that Kim Jong Un has been successfully brought to his knees by economic sanctions. China is fully enforcing these sanctions against North Korea for the first time, and North Koreans may very well be hurting because of it.

However, it’s important to understand that Kim Jong Un and his predecessors have wanted a meeting with a U.S. president for a long time.

“North Korea’s goal has always been to talk with the United States directly,” Kim said.

In a way, a face-to-face meeting legitimizes North Korea as a country that the U.S. takes seriously. For a long time, the U.S. has demanded denuclearization before any meeting with North Korea — so Kim agreeing to freeze missile testing in order to meet the U.S. is certainly a compromise. But the surprise is that Trump so readily jumped for an opportunity to meet Kim Jong Un in person, without any prerequisite discussions (even his own staff was reportedly shocked).

“Personally, if I were advising Donald Trump directly, I wouldn’t [meet Kim Jong Un]. But as a resident [in South Korea], I’m obviously pleased,” Ward said. “From the point of view of the U.S. government, it’s not a good idea. They should have working level talks with senior-level diplomats or have Tillerson go to Pyongyang or meet in a third country. There are many stages that they should have gone through before Trump met Kim Jong Un.”

As journalist Nicholas Kristof put it in the New York Times: “A summit constitutes a huge gift to Kim, and it’s puzzling that our Great Dealmaker should give up so much right off the bat.”

Trump has been quick to lap up any credit for the diplomatic whirlwind that took place shortly before the Pyeongchang Winter Olympics — and to be fair, some feel that his “good cop, bad cop routine” is working.

However, South Korea’s Moon has long been the one fixated on establishing friendlier relations with North Korea. Much of his work has been a balancing act between North Korea and the U.S., both of which have flung blustering insults at each other since Trump took office.

“I don’t think any realistic follower of current affairs would really think that Trump is really responsible here,” Kim said.

Needless to say, it’s that exact balancing act that has some worried — particularly if a meeting with Trump and Kim goes unmoderated.

“I’ve seen commentary in the South Korean news and from politicians in South Korea that say, you know, this could be very bad because Kim Jong Un is unpredictable and, more than that, Trump is also unpredictable,” Kim said. “Even from the liberal side, [people] are saying that.”

But even if there are awkward handshakes and missteps, the consequence isn’t necessarily war. So far, calling each other “dotard” and “little rocket man” hasn’t caused outright conflict.

“I think that Kim Jong Un will be far less off-the-cuff than Trump and he won’t be provoked, because he’s not stupid,” Ward said. “We talk about North Korea as if it’s this irrational state sometimes. They’re not going to start a war just because Donald Trump is rude to Kim Jong Un.”

There are reasons to be skeptical. But some are hopeful that this is the beginning of real peace.

In South Korea, the May summit brings both tinges of hope and uncertainty.

“I’m feeling positive. … I think this meeting between North Korea and Trump is an important step in making the beginnings of reunification,” said Kim, a Seoul-area resident and professor who declined to give his first name.

“Since I was young, I’ve lived in a divided country. I never thought we would end up doing something like this,” said Choi Yoon Hee, a 29-year-old entertainment planner who was lounging in a Seoul-area park on Sunday. “I was very surprised to see that North Korea and the U.S. will be meeting. [Now], I wonder if I can see reunification during my lifetime.”

Nevertheless, history says that North Korea is a tough one to trust: In 1985, North Korea signed an international treaty barring it from creating nuclear weapons and in 1991, it joined the United Nations. Meanwhile, the country’s leader at the time — Kim Il Sung, Kim Jong Un’s grandfather — kept pushing forward with the production of plutonium, an ingredient needed for nuclear bombs.

By the end of 1994, a lot had happened: Kim Il Sung died and North Korea, now led by Kim Jong Il, openly planned to exit the treaty that banned nuclear weapons. The nuclear crisis was averted when North Korea signed the Agreed Framework.

“I hope they get on well. I hope the summit happens and on neutral ground, and I hope this is the start of long, slow, calm process that will allow North Korea’s economy to grow [for the sake of its residents] and ease tensions and sanctions,” Ward said. “But I’m not sure that’s going to happen.”