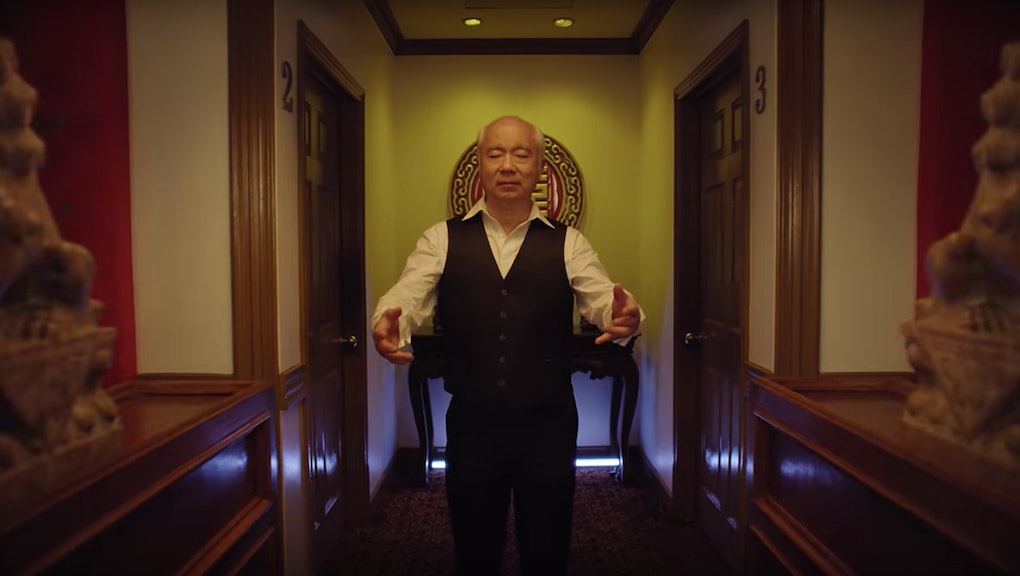 The video for rapper Lil Dicky’s new single, “Freaky Friday,” has caused a bit of a stir because it shows Kendall Jenner singing about her vagina with autotune — but much more confusing is the clip’s reliance on numerous racist tropes.

Lil Dicky is, of course, no stranger to issues surrounding race. Part of his shtick as a white rapper is his willingness to toy with the racial politics of hip-hop. It makes him a contentious figure, but it also hasn’t stopped him from building a large fanbase. The video for “Freaky Friday,” which features Chris Brown, Ed Sheeran and DJ Khaled, debuted on March 15, and it already has more than 4.5 million views on YouTube.

But those millions of people are being served something that plays into tired stereotypes of Asian and black Americans.

Here’s a rundown of what happens in the “Freak Friday” clip: The video opens in a Chinese restaurant for no immediately apparent reason. The first shot is a red and gold lantern, and the second shot introduces a waving Maneki-neko cat. The third shows an Asian woman talking at a nearby table.

Soon enough, the video indulges in a racist conceit that’s all too familiar: Lil Dicky, holding a menu at a table with two other white guys, asks an apparently clueless Asian waiter what he should order.

“So I’m pretty torn between the General Tsao’s chicken and the chicken lo mein,” Lil Dicky says to the waiter. “What is your preference between the two?”

The man warmly smiles, then simply says “yes” — clearly not understanding the rapper’s question. The three white guys at the table exchange a grin, and Lil Dicky politely puts in his order and bids a “thank you.” In some ways, it’s almost as if the scene is trying to portray Lil Dicky as worldly, kind and infinitely patient.

But really, it’s offensive and we’ve seen this sort of thing many times before.

That’s not where the racist Asian tropes end, though. Right as the waiter leaves the shot, a man (played by American Vandal’s Jimmy Tatro) comes up to the table and asks if it’s indeed Lil Dicky he sees. When Lil Dicky responds in the affirmative, the man turns to his female friend and explains that Lil Dicky is “not, like, a rapper-rapper. He’s like a funny rapper. He raps about, like, you know, like, how small his dick his. You know, he’s like a funny little white guy.”

The exchange with that fan prompts the rest of the music video’s “Freaky Friday” plot, and gets the song going. Lil Dicky turns to the TV on the restaurant wall, sees a shot of Chris Brown and laments how he’s not cool as other hip-hop artists — how he doesn’t have the dance skills or “the sickest tattoos.” When he remarks that he wishes he could be someone else, the Asian waiter — who couldn’t understand the rapper’s English just a minute before — appears in the background as though he’s listening to Lil Dicky empathetically.

On the television, Chris Brown also says that he wishes he could be somebody else, to get a break from the pressures of celebrity, and the waiter shoots off a scheming look. In the typical, orientalist depiction of Asian Americans, the Chinese restaurant waiter reveals that he’s actually a mysterious and elusive figure with few words and much to hide.

Lil Dicky breaks open a fortune cookie and repeats his wish in his mind. The Asian waiter suddenly closes his eyes and raises his hands in the air, as if he’s summoning some kind of magic. With a downward strike of his hands, he uses his mind to make Chris Brown and Lil Dicky switch bodies. Cue Lil Dicky waking up as Chris Brown in a luxury house, where he explores what it means to be famous (and black).

At this point, it’s clear that the video is actually trying to address racial stereotypes on purpose. But one of the video’s many problems is that it only talks about race in terms of black and white. At times, it’s also unclear whether the video is throwing shade at black stereotypes or reinforcing them.

Lil Dicky wakes up in Chris Brown’s house full of women in underwear and lingerie and eventually sings, “I got all these hoes in my DM. Hold up — holy shit, I got a kid.” He also questions whether he’s allowed to say the “N-word” but then ecstatically does so around town, finds a gun on his bookshelf and shoots a terrified look at the camera, and boasts that he’s “light-skinned black” while crouching around a Ferrari.

When Chris Brown wakes up in Lil Dicky’s body, he laments about his small penis size but celebrates other privileges. “Ain’t nobody judging cause I’m black or my controversial past — I’mma go see a movie and relax,” he says. It’s clear that Lil Dicky is trying to portray himself as a woke guy who can talk about race — but in the “Freak Friday” video, that means only if you’re white or black, a phenomenon commonly referred to in Asian-American studies as the “black-white binary.”

Even if we give Lil Dicky the benefit of the doubt with regards to the video’s handling of black stereotypes — that he’s really critiquing the prejudiced ideas, and not simply underlining them — once again, Asian Americans are left out of that narrative and made out to be props. They’re not white, they’re not black — they’re just the magical, spiritually enlightened and docile other that grants wishes and serves exotic food. It’s not cute and it’s not funny — it’s just racist.