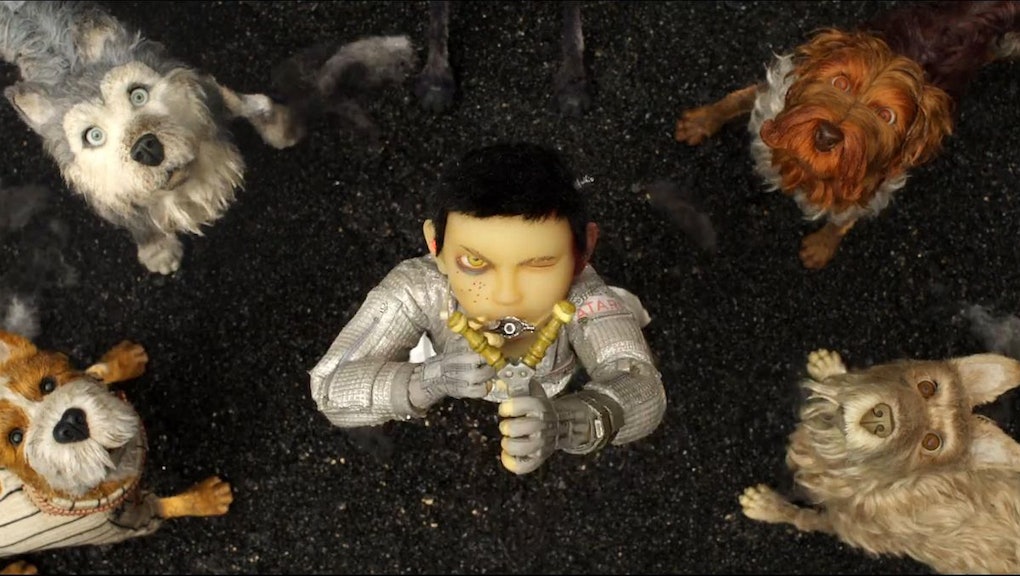 ‘Isle of Dogs’ is Wes Anderson at his best and worst

Despite the implied singularity of its title, Wes Anderson’s new stop-motion feature, Isle of Dogs, takes place on two islands — one (Japan) formerly of dogs, the other (Trash Island) newly of dogs. The turning point, we are told, occurs 20 years in the future, when an epidemic of various ailments takes hold, and the fictional Megasaki city’s nefarious Mayor Kobayashi (voiced by Kunichi Nomura) exiles the province’s canines to live among the trash.

In the two islands, Anderson’s worst and best tendencies as a filmmaker are on display. Megasaki is shrouded in layers — narration about the city’s canine history; translation of Japanese through machines, subtitles and humans; an ongoing English language television broadcast covering dog developments. Anderson, whose window into Japan was primarily ‘50s and ‘60s Japanese cinema (Akira Kurosawa and Hayao Miyazaki specifically), unfurls these layers with funny gags. But he keeps us, like himself, a step removed from the culture that is meant to ground the movie. Though Megasaki makes for a gorgeous backdrop, it doesn’t seem that Anderson has much of anything to say about these people and this place (which has led to criticisms of cultural tourism). It is purely a site to stage a legend.

Conversely, though no paradise, Trash Island is the ideal playground for Anderson. (It actually reminded me of being a kid playing on a real trash playground.) By turns squalid and striking, the detritus on Trash Island is arranged into drab but impressive formations: mountains of tires, igloos of glass and yellow-grime roads. Anderson is cinema’s greatest visual stylist, and can clearly make anything look enchanting. But beyond aesthetics, Trash Island allows the auteur to transport the viewer unencumbered by the weight of reality. Also, like New Penzance (the fictional island that hosts much of Anderson’s 2012 feature, Moonrise Kingdom), Trash Island is unpopulated by people and, as such, an extraordinary site for children to embark on adventures unsanctioned by adults.

Which is what brings a jet crashing onto the island. The plane’s pilot is Atari (Koyu Rankin), the orphaned 12-year-old ward of Mayor Kobayashi. Atari has hijacked a Junior Turbo Prop XJ750 with the mission of retrieving his trusty former guard dog, Spots (Liev Schrieber). Upon waking from the crash, though, the little pilot is greeted not by Spots but by a pack of alpha dogs, each with a leader’s name and a legend’s voice: Rex (Ed Norton), King (Bob Balaban), Duke (Bill Murray), Boss (Jeff Goldblum) and Chief (Bryan Cranston). With the exception of Chief, a mangy stray who doesn’t take to people, the mutts are eager to help. As the former show dog Nutmeg (Scarlett Johansson) says, “He’s a 12-year-old boy. Dogs love those.”

While Atari and the alpha dogs are ostensibly on a quest, Atari is also helping to set the stage for a youth revolt — and that’s the aspect of the film that’s most resonant. Isle of Dogs is both an approximation of, and ode to, adolescent outrage. (Francois Truffaut is a frequent influence for Anderson, and there’s a bit of the rebellious energy from his New Wave classic The 400 Blows here.) Anderson captures the sensation of recognizing authority as crooked and meeting its injustice with enormous, unwavering passion. Atari, as well as Tracy Walker (Greta Gerwig), a fiery American exchange student studying in Megasaki, each, separately, fight relentlessly for what’s right (him with slingshot, her with investigative journalism); and for them, what’s right isn’t in question. They’re each single-minded in their efforts to rescue dogs.

The film is whimsical, but the kids’ fervor is real; it calls to mind many of the activist teens who are fighting for what they believe in at this very moment in the real world. Atari and Tracy are each expressively animated, and brimming with emotion, furious at the world’s unfairness and at the repression and cluelessness of their elders.

And though the youngsters aren’t the only ones giving their energies to fighting for the dogs, they are the only ones fighting with much energy. Just after the dogs are sent away, a scientist, who is also a potential challenger to Mayor Kobayashi’s re-election bid, discovers a cure to the dogs’ maladies. But he is naive and careless in the way he announces the finding. His assistant (voiced by Yoko Ono), who also has the cure, is reduced to self-pity when the scientist’s efforts are thwarted. Meanwhile, when Tracy Walker tells her teacher her theories of discovered cures and political corruption, the monotone teacher dryly asks if she can prove it. The few adults in Isle of Dogs who are decent are also either apathetic or plain pathetic.

Anderson’s juxtaposition of spirited kids and cold adults makes clear where his sympathies lie. Beyond being brave and tenacious, he portrays kids as compassionate and inclusive, a worthwhile compass for society at large. Atari, for instance, is undiscriminating in his love for the pooches, showing the stray equal affection as the cuddlier former house dogs. When Atari finds himself alone with Chief, he throws a pipe for him to fetch, pets and hugs him, even bathes him. Love is simpler between boys and dogs; life is simpler without adults.

Watching Atari’s adventure on Trash Island, I was quick to leave myself — or, perhaps more accurately, a younger me was quick to take hold. The film is a fantasy of youth power, and sitting in the theater I found myself feeling, with the intensity of my childhood self, the weight of authority and boundlessness of imagination.

Perhaps I should’ve been upset by the breezy way Anderson depicts a culture that isn’t his. But truth be told, that barely crossed my mind. Granted, that could be because I’m white. But unlike with 2007’s The Darjeeling Limited, this appropriation felt more loving than exploitative on the part of Anderson. Again, I may feel that way because of my identity, but I’d like to think that it’s because Anderson compromised my critical faculties with the thwap of Atari’s slingshot, with Tracy Walker’s impassioned search for the truth, with a few witty dog jokes, and, ultimately, with the joy of a good romp. One island adventure overshadowed the shortcomings in the portrayal of the other. I’m guilty of puppy love.