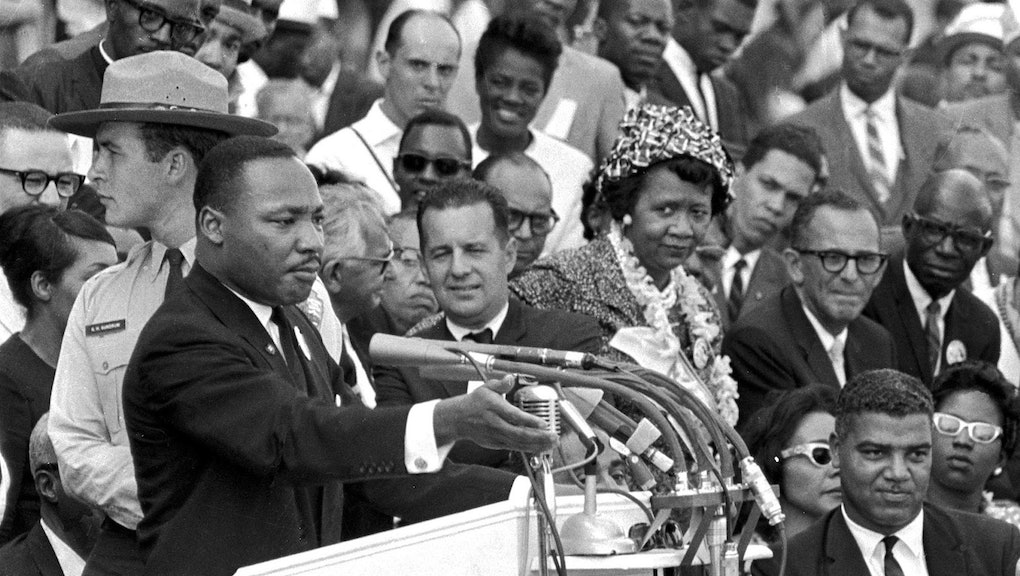 50 years after King’s assassination, the symbolism of his death keeps the desire for change alive

For Xernona Clayton, the day of Martin Luther King Jr.’s assassination is as searing a memory as the days that preceded his death at a Memphis hotel. Clayton, 87, is among the closest confidants of the King family and an organizer in the civil rights movement.

Fifty years ago, she was tasked with driving King from his home in Atlanta to the airport and witnessed the last time the patriarch kissed his wife and children goodbye.

Later on the drive to the airport, King remarked to Clayton, “You know, I’m really worried about their behavior. I’m going to make an effort, the minute I come back. I’m going to alter my schedule and spend more time with these boys.”

To some degree, Clayton felt the loss of King twice, she said: once for his children and again as the nation learned about it through TV broadcasts, radio announcements and newspapers. But today, she is among millions of Americans who see King’s death as a marker by which to measure how much racial progress has been made.

“Everybody is doing something on his life, 50 years after his death,” Clayton said of a countless number of events scheduled across the nation and the world on Wednesday to mark the day King died. On the evening of April 4, 1968, 39-year-old King was preparing to leave for an event when a bullet ripped into his face as he stood on the balcony of the Lorraine Motel in Memphis, Tennesee. He’d been there to join a march of predominantly black sanitation workers striking for better pay, benefits and the right to unionize.

News of his death shook many communities. Civil unrest erupted in more than 100 U.S. cities, as years of mounting frustrations around inequality and lack of opportunities for economic mobility boiled over. King helped usher in federal civil rights and voting rights protections. In his last years, King’s anti-Vietnam War stance drew flack from white conservatives and black civil rights leaders. But upon his death, there was a feeling that a nonviolent movement for change had died violently with him.

“In the last speech Martin Luther King made, the mountaintop speech, he said there were difficult days ahead,” the Rev. Al Sharpton said during an interview, as part of a special series of conversations about King that Mic organized between parents and their children. Sharpton is the founder of the National Action Network, a civil rights group where his eldest daughter, Dominique Sharpton, is director of membership.

“We’ve had difficult days. We’ve seen police shootings. The irony is...days before the 50th anniversary of his assassination, I’m preaching the eulogy of an unarmed kid in Sacramento,” Sharpton added referring to the March 18 police shooting death of Stephon Clark.

Fifty years since King’s death, progress has been made in representation of black Americans across government and nongovernmental institutions, business, science and the arts. In 2008, the nation voted for President Barack Obama to become the first black American to serve in the nation’s highest elected office. But blacks see higher rates of unemployment, lower rates of homeownership and a growing wealth gap with whites. Meanwhile, black Americans are disproportionately shot and killed by police and the lack of uniform accountability for those deaths continue to spark protests in cities across the nation.

They may not be major leaders, but police brutality victims like Walter Scott, Alton Sterling and Clark are just as important to black Americans. Families of the victims often become stalwart supporters of the movement for change, even if unwillingly at first. And like King, their stories haven’t always been told with care.

“You always taught us, one important thing was to control your narrative and control your story,” Dominique Sharpton said in the conversation with her father. “Those who really work in the trenches and in the movement, and do the work every day, you know, to aid progress in society, we need to tell our stories.”

There is also recognition among civil rights activists and historians that media play a critical role in how progress since the civil rights movement is measured and felt today. If media back then fixated on violence and failed to get at the root of people’s frustrations, due largely to the lack of diverse perspectives in newsrooms, those inadequacies are only marginally better today.

“People are ingenious at finding ways to stand aside from the real essence of the issue involved, where race is at the heart of it,” Taylor Branch, a historian and author of the civil rights movement, said in an interview with Mic. “We don’t do that story very well.”

Branch was the executive producer for the newly released HBO documentary, King in the Wilderness. The film chronicles the civil rights leader’s seeming fall from favor as an anti-war and anti-poverty campaigner during the last years of his life. At the time, the Black Power movement was gaining influence as an alternative to King’s nonviolence tact.

“There really weren’t many people who were — in the media, who were following the Poor People’s Campaign,” Branch said referring to King’s effort to link institutionalized racism to socio-economic disparities. “The ones that were [covering the campaign] were disparaging it.”

The disparities King pointed to were, in part, the cause of anger and civil unrest in black communities before and after his death. The rash of urban disturbances prompted President Lyndon B. Johnson to create the National Advisory Commision on Civil Disorders, also known as the Kerner Commission. And in 1968, the commission released a scathing report that included recommendations for media outlets. It said that media had failed to accurately portray the civil disturbances and their root causes, and that it was because their newsrooms were too white.

The commission said the media needed to “integrate Negroes and Negro activities into all aspects of coverage and content, including newspaper articles and television programming.” Today, nonprofit organizations do some of the work that the Kerner Commission called for 50 years ago.

But newsrooms are still too white. An annual survey by the American Society of News Editors found that minority journalists are just over 16% of the workforce in U.S. newsrooms in 2017. That’s a clear underrepresentation for people of color, who are about 40% of the U.S. population, according to the U.S. Census.

It’s clear to many activists that progress can be made on all fronts — particularly in racial justice and representation in the media. However, King’s steadfastness and militancy in the pursuit of equality and justice still resonates across generations, Sharpton said.