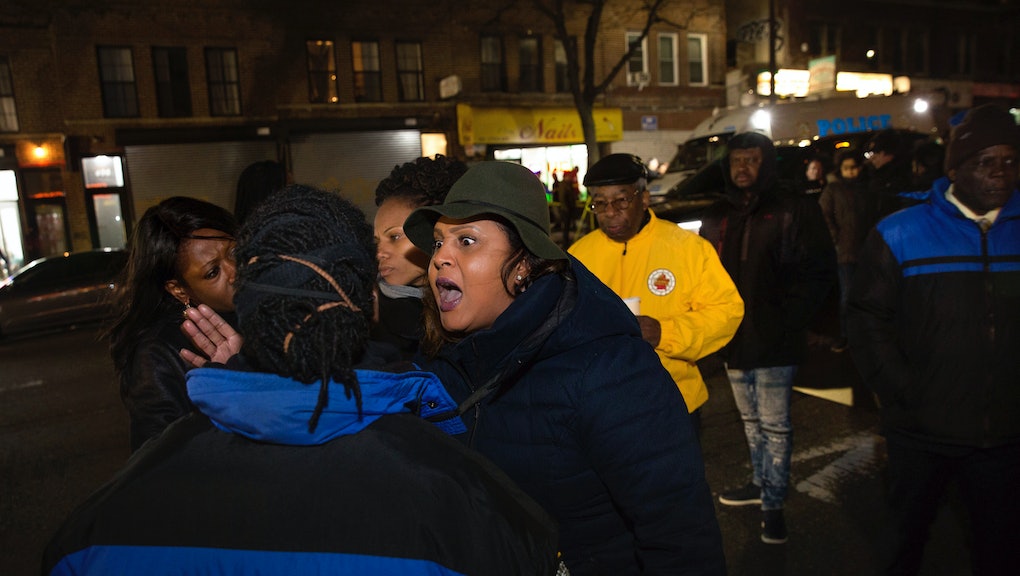 Protests for Saheed Vassell continue in NYC: “We march. We rally. It doesn’t change anything.”

Dozens of demonstrators angry about the Wednesday afternoon police shooting death of Saheed Vassell stood nose to nose with a row of New York City police officers at the climax of a tense protest on Thursday night in Brooklyn, New York.

Vassell, whose father told the New York Times that his 34-year-old son had bipolar disorder, was shot and killed while allegedly standing in a shooting stance holding what police thought was a handgun. The object was a metal pipe.

His death occurred on the 50th anniversary of Martin Luther King Jr.’s assassination in Memphis, Tennessee, and less than two weeks after the high-profile police shooting death of Stephon Clark in Sacramento, California.

Vassell was fatally shot in the Crown Heights neighborhood of Brooklyn. Bianca Cunningham, 33, a union organizer for Communications Workers of America and member of Black Lives Matter Greater New York, has lived in the same building as Vassell’s family for years. She had been at a ceremony to commemorate King’s life when she heard another black man had been shot by police in her neighborhood.

“It doesn’t sit well with me that someone who was born in this building, who’s differently-abled, was shot,” Cunningham said while crying over the phone Thursday evening. “Cops always talk about having good relations in the communities. If there was a cop really close with the community, they would have known him. We all knew him. I feel like we failed as a neighborhood.”

Cunningham was among the estimated 1,300 people who marched through the streets of Crown Heights to the NYPD’s 71st precinct Thursday night, demanding to know the yet-to-be released names of the officers who shot Vassell.

That was hours before an eventual standoff when both police and protesters refused to back down and leave the street corner where Vassell was fatally shot on Wednesday.

“Leave, piggies! Leave! Get the fuck out of here!” one demonstrator shouted.

The sound of Jamaican dancehall hitmaker Vybz Kartel’s “Watch Over Us,” and NWA’s “Fuck the Police” blared from a car stereo, as the crowd continued to taunt the police officers, momentarily drowning out the chopping blades of the police helicopter hovering over head.

“You’re only good at following orders and licking boots!” one man shouted at the officers.

“And killing black people!” another responded.

“Get the fuck out of here!” the first man continued.

The chanting of “FTP! Fuck the police!” and “NYPD! KKK! How many kids did you kill today?!” echoed through the night.

A platoon of Strategic Response Group officers stood stoic at the corner of Utica Avenue and Montgomery Street near one of two candlelight vigils for Vassell, who was Jamaican. The glow from the flickering flames illuminated a Jamaican flag and the pictures and posters baring his likeness.

No arrests were made as officers seemed content to give the demonstrators space to vent their anger. The officers left the scene around 11:25 p.m.

“Come on. Let’s go,” one of them said, before his fellow officers followed in tow. They walked rank and file down Utica before loading into vans and disappearing around the corner.

The protesters erupted in cheers. It was the smallest of moral victories in a years-long battle over police reform in the five boroughs. Vassell’s name has joined a long list of other people killed by New York City police officers: Eric Garner, Deborah Danner, Kimani Grey, Akai Gurley and Delrawn Small just to name a few.

Small’s brother, Victor Dempsey, marched through the streets on Thursday in support of Vassell and his family. He recognized an uptick in anger and said he feared the tension between police and the public was reaching a boiling point.

“Violence is inevitable at this point,” Dempsey said, echoing the frustration of pretty much everyone at the march. “We protest. We march. We rally. We speak. It doesn’t change anything.”