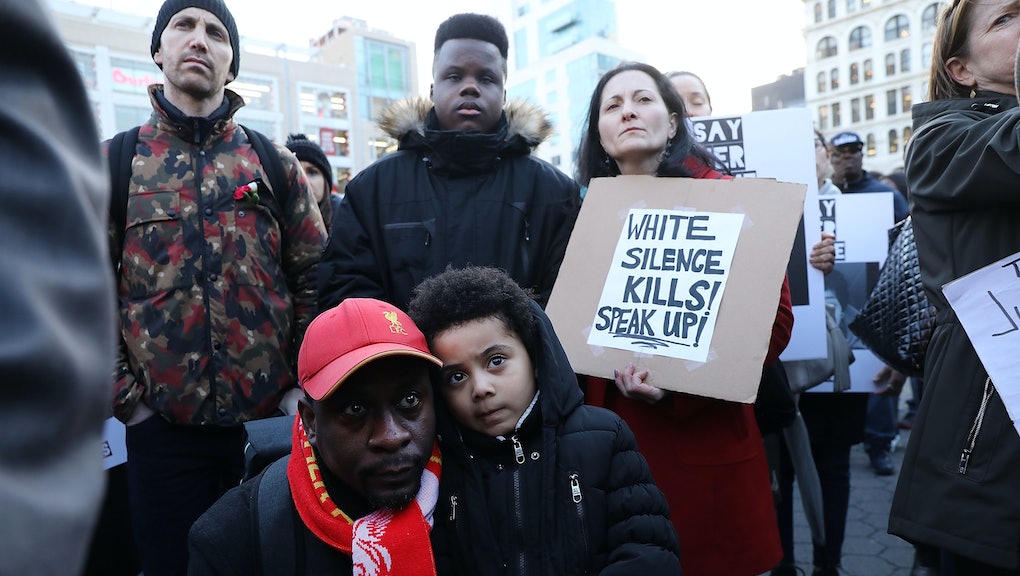 Conservative pundit Ben Shapiro has weighed in twice in the past week on the police shooting death of Stephon Clark.

“It’s an amazing story and really a travesty that demonstrates lack of police training,” Shapiro said Friday on his eponymous, nationally syndicated podcast. “The guys responsible are certainly going to spend some time in jail, I think.”

Clark, 22, was shot and killed by Sacramento, California, police officers March 18 after they mistook his cell phone for a hand gun. The officers shot Clark eight times. He is survived by his two children. The incident was captured on video by a police helicopter and two officers’ body cameras. It has sparked nationwide protests, including one in Sacramento March 22 that delayed the start of a Kings game and prompted the NBA team’s owner, Vivek Ranadivé, to make an on-court speech about the incident.

Shapiro’s comments Friday drew ire from many of his conservative listeners, who complained on Twitter. The former Breitbart correspondent walked back his lament Monday, but he reiterated that the shooting was excessive.

“Should [Clark] have immediately obeyed the command of the officer? Yes,” Shapiro said. “[But] the guy was unarmed. When [Clark] comes back around, [the officers] say, ‘Show me your hands.’ ... They didn’t even give him a chance to respond.”

This back-and-forth illustrates an apparent contradiction in the conservative orthodoxy around police brutality. Limiting government power and protecting individual rights are supposed to be Republican tenets. Right-wing pundits rant often about the threat of tyrannical government officials.

Yet armed law enforcement officers have been functionally given a license to kill, with little to no institutional oversight or accountability — and even fewer calls to account from the GOP. From 2005 to April 2017, 80 officers were arrested on murder or manslaughter charges, according to CNN. Only 35% of them were convicted, and only one was convicted of an on-duty murder.

In contrast, civilian Americans charged with murder are convicted 70% of the time, according to the Bureau of Justice Statistics. Yet supporters of the GOP are less likely than Democrats to believe police brutality is a problem in the United States. And like many conservatives, Shapiro has been a staunch critic of Black Lives Matter, a global network of 22 local organizations and other like-minded groups fighting for black liberation — whose main calling card has been protesting the persecution of black and brown people via the police and criminal justice system.

In August, Pew Research found just 23% of Republican backers supported Black Lives Matter, compared to 80% of Democrats. But conservative pundits like Jonah Goldberg have argued the movement’s call for greater police accountability is aligned with some conservative principles.

“This country was created, in part, because the founders were outraged by arguably slight infractions – taxes on tea! – on their liberties and dignity,” Goldberg wrote in 2016. “Is it really so unfathomable that African-American citizens should be outraged or distrustful of government when they have good reason to believe the state is murdering young black men?”

Conservative National Review writer David French — who once called the shooting death of Philando Castile “unacceptable” — made several similar points in two columns about Clark on March 29 and April 4.

“When we speak about police shootings, we often focus too much on the most basic question — was the shooting lawful — rather than the far more complex and ultimately more consequential question. Was the shooting proper?” French wrote on March 29. “Is this how we want to train police to respond? Is this how we should conduct escalation of force in an American neighborhood?”

It’s an issue that Betsy Mahan, chair of the Republican party in Clark’s native Sacramento, admits she has wrestled with in the aftermath of Clark’s shooting death.

“I think it’s really important to keep an open mind,” Mahan said Tuesday. “Republicans look at law enforcement differently than we would, say, a bureaucracy in the state or federal government. We look at law enforcement as enforcing the law and keeping people safe. ... A lot of our friends who have African-American sons, they’re looking at this case. I’m looking at it as a Sacramento County resident and wanting to make sure that people feel comfortable when they call the police and that people are treated fairly.”

One likely explanation for these apparent inconsistencies is the demographic makeup of the GOP, which is overwhelmingly white and prone to championing racist policies. Black Lives Matter is comprised largely of black people and is predicated on the disruption of many white-run institutions the GOP holds dear.

Mahan acknowledged that many in her party focus more on how supporters of police reform choose to protest than why. She criticized recent protests in Sacramento where demonstrators have stopped the flow of traffic and blocked the entrances to multiple sporting events.

“We understand the very deeply held emotion,” Mahan said, “but Republicans as a whole don’t agree that’s a productive way to get your point across and get sympathy, by trying to intimidate people.”

In addition to shutting down public forums, Black Lives Matter supporters have run for office, lobbied Congress, run in prosecutorial elections, knelt during the national anthem before sporting events, rapped, sang and spoken at Trump rallies, only to face staunch pushback from whites and the right, regardless of how they protested.

Meanwhile, Sacramento Police on Wednesday revised its body camera policy to require officers to vocalize their reason for muting a body cam before doing so. (The officers who killed Clark muted their microphones in the shooting’s immediate aftermath.)

Also on Wednesday, Black Lives Matter’s Sacramento chapter released a list of demands in response to Clark’s death. The group called for the firing of the officers who shot Clark and for the county prosecutor to file charges against them.

“When killer cops are held accountable for their actions that’s when cops will think twice be[fore] putting bullets in black bodies,” the group wrote.