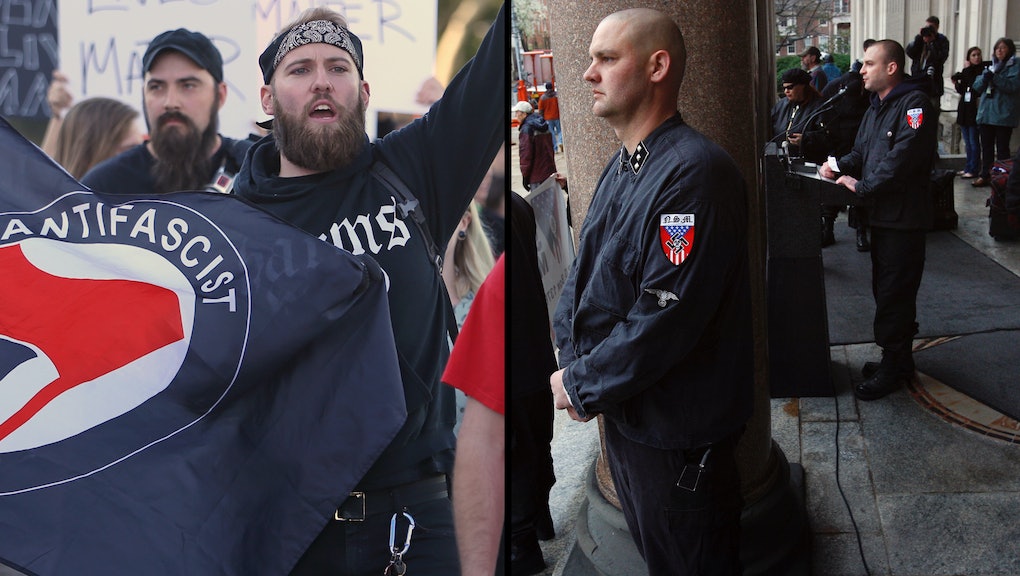 Anti-fascist demonstrators from across the southeastern United States are traveling to Newnan, Georgia, the weekend of April 20 to oppose a planned neo-Nazi rally commemorating Adolf Hitler’s birthday.

Hate group watchdogs from the Southern Poverty Law Center and Anti-Defamation League told Mic the event might be the largest gathering of white nationalists and counter protesters since the White Lives Matter rallies in rural Tennessee in October, or the deadly “Unite the Right” rally in Charlottesville, Virginia, in August.

“I think everyone’s just getting ready to come out and hoping for a big turnout,” activist Sean Wolters, 26, of the anti-racist group All Out Atlanta said in a phone interview Thursday. “Everyone still has the memory of Charlottesville in their minds.”

Neo-Nazi members of the National Socialist Movement, led by Jeff Schoep, recently obtained a permit to host their rally from 3 p.m. to 5 p.m. on April 21 in Greenville Street Park in downtown Newnan, a town watchdogs say has several Confederate monuments. Newnan is just 34 miles from Temple, Georgia, home of the Georgia Peach Restaurant and Museum, which is frequented by the Ku Klux Klan.

“The owner of that bar is either a KKK member or completely open to having KKK members at his bar,” Heidi Beirich, director of the Southern Poverty Law Center’s Intelligence Project, said. “[The Nazis] chose Newnan because they can have events in a nearby private space.”

Like-minded members of the pro-Confederate League of the South are also rumored to be participating in the event, according Beirich.

The city of Atlanta, which is 54% black and home to several anti-racist and anti-fascist activist groups, is 39 miles northeast of where the rally is slated to take place. On Wednesday, an anonymous contributor to the anti-fascist blog site It’s Going Down posted a call to arms for local activists to make their way to Newnan. So far, roughly 200 counterprotesters have committed to coming, according to Wolters.

“It could be more, could be less,” Wolters said. “Hard to predict.”

Other metro-Atlanta activist groups are voicing their support for the counterprotest, but aren’t committing to sending members. Sir Maejor, leader of Black Lives Matter Atlanta, said the upcoming neo-Nazi rally has captured his and other advocacy groups’ attention.

“Everybody’s talking about it,” he said. “I wasn’t sure I would go out because I didn’t want to give them that much attention. If we went, we would have armed folks, AR-15s, the whole nine [yards]. Being that it’s in a white town, we’re not too concerned about it.”

Newnan is relatively diverse, with a combined nonwhite population of roughly 41%.

Angela Oliver, communications associate for Project South, one of Atlanta’s most prominent youth-led social justice advocacy groups, said her organization hasn’t decided whether or not to travel to Newnan.

“As of yet, we are not part of the counterdemonstration,” she said, “Though we certainly support those standing up against white supremacy.”

Trigger Warning Atlanta, a gun club for the local queer and trans community, said some of its members may be in Newnan the day of the rally, but it would be in an unofficial capacity.

Even local business owners have expressed concerns about the rally.

“Everybody’s just kind of not at ease about it, wondering why they’re coming here,” David Gabbard, owner of Local Provisions, a specialty food market in downtown Newnan, said Friday. “We’re all planning on closing that day. Nobody’s going to come to shop with that rally taking place.”

A Change.org petition signed by more than 42,000 people has failed to persuade local officials to bar the neo-Nazis from coming.

“The City of Newnan is aware of recent activities in our country that include the actions of similar protests and counterprotests,” Newnan Assistant City Manager Hasco Craver wrote in an emailed statement. “The City of Newnan has a responsibility to protect free speech rights, the individuals and groups that [choose] to exercise those rights and the broader community in which those rights may be exercised.”

By most accounts, the white nationalist movement galvanized by the election of President Donald Trump has been in shambles since the “Unite the Right” rally in Charlottesville. On April 6, the NSM signed an agreement with the Virginia city promising never to return there again as an armed group.

The deadly violence on Aug. 12, 2017 also led to infighting among some of the leaders and groups involved, most notably exhibited by the split between Traditional Workers Party leader Matthew Heimbach and his spokesman, Matt Parrott. The organizations have also largely failed to add less radical, pro-Trump “civic nationalists” to their ranks — conservative Americans who support Trump’s policy agenda, but don’t openly subscribe to a white ethno-state, anti-Jewish, anti-gay belief system.

Divergent philosophies between hardliners like Schoep, the NSM and so-called “optics cucks” — a pejorative term for alt-righters who are overly concerned with how the public perceives them and their movement — have further fractured the coalition of white nationalist groups that formed the Nationalist Front when Trump was first elected.

“NSM started the whole optics issue by dropping the swastika from their patch back in November 2016,” Carla Hill, senior investigative researcher for the ADL Center on Extremism, said. “Before that, they were called the Aryan Nationalist Alliance. They dropped the swastika from their patch and started calling it the Nationalist Front, which got them some traction. Even though they’re actual neo-Nazis, they started the whole optics debate by making this look more tolerable to mainstream people.”

Since Charlottesville, most of these pro-white hate groups have worked to hold more gatherings in rural towns to better avoid anti-fascist counterprotesters, according to representatives from the SPLC and the ADL. On April 7, the League of the South hosted a Confederate Heritage Rally in Wetumpka, Alabama, that was unencumbered by opposition. The joint White Lives Matter rallies in the rural Tennessee towns of Shelbyville and Murfreesboro in October didn’t go as well. (One person was arrested at the first rally. The second was canceled because of security risks.)

Hill says the NSM as a group isn’t as interested as the alt-right in recruiting mainstream “normies” into their ranks. Unlike the button-down shirt-wearing members of the alt-right, the NSM is better known for its militant stances, pro-Nazi memorabilia and pomp. Some of their previous demonstrations have turned violent in places like Toledo, Ohio and, of course, Charlottesville.

Observers aren’t quite sure whether or not the NSM is hoping to draw large-scale opposition to its Newnan rally. Hill said the group may be trying to provoke a response from counterprotesters.

“They want to present themselves as peaceful and to make the counterprotesters look un-peaceful,” Hill said.

But a local counterprotest group calling itself #NewnanStrong is hosting a gathering on April 20 to promote unity among locals ahead of the Nazi rally the next day. Hill said events like these are more productive for those looking to counter the presence of hate groups like NSM.

“Having someone there of opposing ideology to counterprotest like very far-left antifa, it’s much more likely to cause violence when they’re there with right-wing extremists,” she said. “It’s best if no one would pay [the Nazis] any attention.”

Wolters, one of the anti-racist counterprotest organizers, said for him and his allies, ignoring the hate groups isn’t an option and confronting them is a mandate.

“We want to oppose the NSM as vocally as possible and try and disrupt their gathering of forces,” he said, “And to make a loud statement that this type of gathering isn’t going to be allowed to occur in Georgia or the South.”