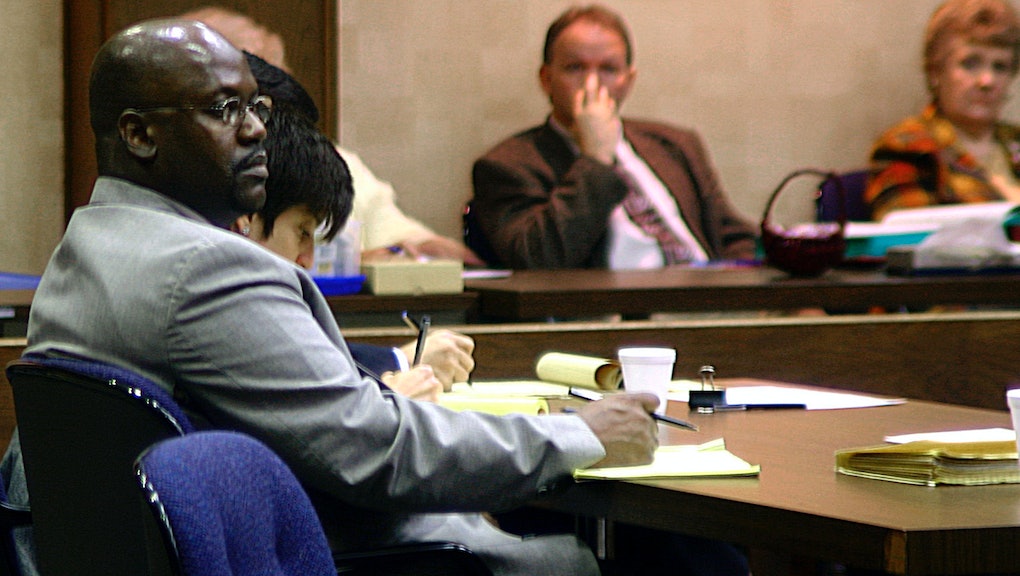 Season 2 of ‘In the Dark’ will tackle the Curtis Flowers case. Here’s what you need to know.

The true crime podcast In The Dark will devote its second season, which premieres May 1, to the story of Curtis Giovanni Flowers, a Mississippi man who is on death row for murder charges. Flowers, as the podcast will likely explain in depth, has been tried a total of six times on the same charges, all the while staunchly maintaining his innocence.

As Rolling Stone reported in 2013, he’s the only known person in U.S. history to have gone through six trials for the same crimes. Here’s what you need to know about Flowers’ story before the next season of In the Dark begins.

What is In the Dark?

For those who missed the first season, In the Dark, hosted by investigative reporter Madeleine Baran, is a true crime podcast from American Public Media. Its critical acclaim has distinguished it as a standout among the throng of true crime shows that seemed to take over the podcasting landscape after the massive success of Serial in 2014. The first season of In the Dark, released in 2016, tackled the 1989 kidnapping and murder of 11-year-old Jacob Wetterling, a Minnesota boy whose case went unsolved for 27 years until his remains were discovered in 2016 — while production on In the Dark was already underway.

The nine-episode first season of the show was called “the year’s best true-crime podcast” by Esquire. Vox praised the way the show “perfectly” walks the line between investigation and entertainment, without falling into the “ghoulish” elements of the genre. HuffPost called it the “true crime podcast everyone should be listening to right now.” And now, as was announced this week, the show will turn its investigative eye to Flowers’ case.

Who is Curtis Flowers?

On the morning of July 16, 1996, four people were fatally shot inside Tardy’s Furniture, a furniture store in the small town of Winona, Mississippi, CNN reported in 2010. The victims were Bertha Tardy, the owner of the store, and three of her employees: Carmen Rigby, Robert Golden and 16-year-old Derrick “Bobo” Stewart. In January 1997, after a months-long investigation, Flowers, a former employee of Tardy’s Furniture, was arrested and charged with four counts of capital murder.

The Montgomery County, Missouri, District Attorney’s Office, led by DA Doug Evans, alleged that Flowers had been fired from Tardy’s two weeks before the murders, and had stolen his uncle’s gun and returned to the store to carry out the quadruple homicide.

As Rolling Stone reported, Flowers maintained that he quit, rather than being fired. At the time of his arrest, he was 26, with no criminal record. Evidence that linked Flowers to the crime scene was “largely circumstantial,” according to CNN — there was no DNA and the alleged weapon used in the murders was never found. Eyewitnesses have offered conflicting accounts of Flowers on the day of the crime. But the Montgomery County DA’s Office has tried and re-tried Flowers for the murders.

In Flowers’ first three trials, in which, as Rolling Stone reported, he was judged by nearly all-white juries — he was found guilty. But those verdicts were reversed and the Mississippi Supreme Court ordered new trials in each case. Flowers’ fourth trial ended in a mistrial, his fifth ended in a hung jury. In the sixth trial, the jury deliberated for just 30 minutes before returning a guilty verdict. Flowers appealed — and, in 2016, that appeal led to a U.S. Supreme Court decision that ordered Mississippi to reexamine his case “for evidence of racial prejudice in jury selection,” the Associated Press reported at the time.

Many of Flowers’ defenders have argued that his treatment shows clear evidence of racial bias. In 2010, as Flowers was beginning his sixth trial, Chokwe Lumumba — who represented Flowers in his second trial, in 1999 — told CNN that “the fact they’re trying this case for the sixth time suggests to me there’s some racial motivation here, because there’s no way in the world I can see a white guy accused of doing the same thing being tried six times to procure a conviction.”

As Rolling Stone reported, Evans, the local DA, has a history of attending or participating in at least two local meetings of the Council of Conservative Citizens, a “neo-segregationist organization” that happens to be a Southern Poverty Law Center-designated hate group. According to the SPLC, the CCC is pro-segregation and advocates the danger of “race-mixing.”

Alan Bean, of the non-profit organization Friends of Justice, which tracks civil rights violations in the justice system, told Rolling Stone that Flowers’ ordeal was “one of the worst examples of prosecutorial misconduct I’ve witnessed ... a true miscarriage of justice.”

As for Flowers, whose years spent stuck in an endless legal limbo will be the focus of the next season of In the Dark, he’s continued to maintain his innocence. As Rolling Stone reported, in 2010, Flowers said that he “would rather be executed and go to Heaven and know I did the right thing than to be in this world if I have to admit to something I didn’t do.”