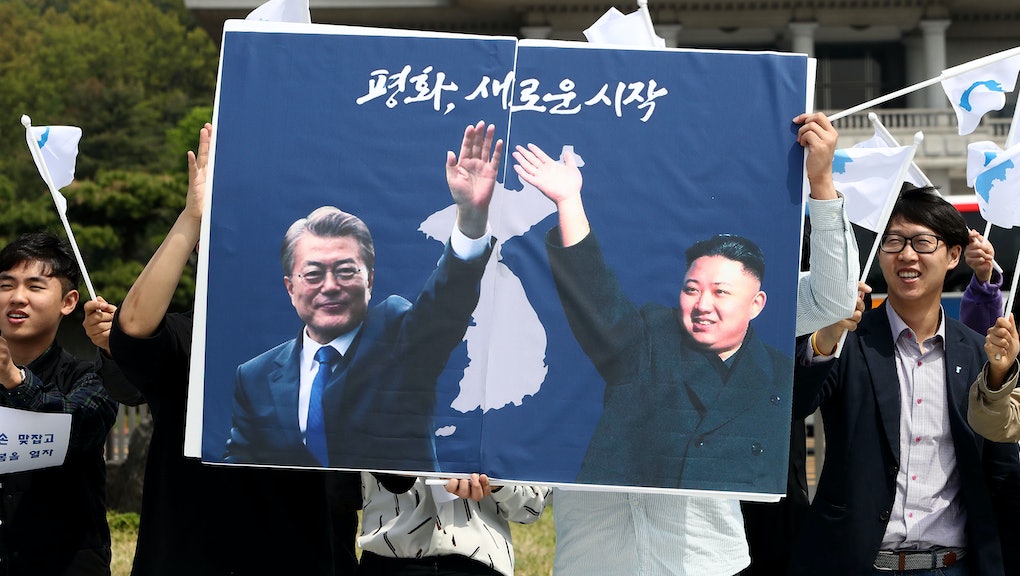 North and South Korean leaders will dine together on Friday. Here’s everything you need to know.

SEOUL, South Korea — This is an important week for international geopolitics — one that could go down in history books, if all goes right.

For the first time ever, a North Korean leader will be heading to the border’s Demilitarized Zone to meet face-to-face with the South Korean president on Friday. Kim Jong Un and Moon Jae-in are expected to discuss key steps for the peninsula’s future over plates of dumplings, grilled beef and cold octopus salad — marking the first inter-Korean summit between Korean leaders since 2007. It’s a moment nobody wants to miss — bits of it, in fact, will even be broadcasted live.

Barring tragic dealbreakers, the April 27 summit is expected to be a primer for a later meeting between Kim Jong Un and President Donald Trump in May or June (no official date or location has been set, but Trump already sent CIA Director Mike Pompeo to North Korea in early April). Yet no matter what happens, 2018 has so far proven itself to be the perplexing antithesis of the previous year, when Trump and the North Korean government were regularly threatening attack.

But there’s still room for lots of uncertainty — not just with North Korea, but other players like the United States, South Korea or China.

“The X-factor here is that we don’t know Kim Jong Un and we don’t know what he’s willing to do, or how far he’s willing to go. The only way we know is to test it [at the upcoming summits],” Jenny Town, assistant director of the U.S.-Korea Institute at Johns Hopkins University and managing editor of 38 North, said. “The Trump administration is equally unpredictable in terms of how they’re willing to negotiate.”

Here’s everything you need to know about what happened and what could come next:

How did we get here?

Headlines as recent as December 2017 would suggest that relations with North Korea were at an all-time low. In that month alone, South Carolina Sen. Lindsey Graham sounded off on live television, urging American military families in South Korea to leave the country for fear that the U.S. is “getting close to military conflict.” Then at least 58 retired military officials signed a letter urging President Trump not to launch a military strike — a serious concern after a year of off-the-cuff jabs like “fire and fury” and “little rocket man.” And in late December, the United Nations approved new sanctions against the North in response to their latest ballistic missile test. That didn’t go over well — North Korea’s Foreign Ministry responded curtly, stating that the U.S. “should wake up from its pipe dream of our country giving up nuclear weapons.”

But about two weeks later, the tone suddenly changed.

On Jan. 2, North Korea announced that it would send athletes to the Pyeongchang Winter Olympics — a move that opened a portal of arguably positive press for the Kim regime, whether it be an Olympic visit from Kim Jong Un’s tabloid-attracting sister (one Reddit user called her “nuclear hot”) or the touching bond forged between hockey players on the inter-Korean team. Suddenly, the two Koreas were marching under one unified flag again, with South Korean President Moon Jae-in holding a fresh invitation to Pyongyang.

“It’s almost as if we are seeing the end of a South Korean drama where everything falls into place,” C. Harrison Kim, an assistant professor at the University of Hawaii at Manoa who studies socialism in East Asia and North Korea, said in a phone interview. ”And it’s all happening because of the Moon administration’s will and what North Korea has been doing with its Olympic diplomacy.”

Though North Korea stated that it’s prepared to talk about denuclearization, the verdict is still out on whether or not that’s true. Nevertheless, it’s highly unlikely (if not impossible) that Moon and Kim will emerge from Friday’s meeting with a done deal — even if North Korea agreed, it would be a drawn-out process that takes years.

“There’s a huge disagreement between Washington, Beijing and Seoul on what is acceptable with denuclearization,” Peter Ward, a Seoul-based columnist at NK News and a former researcher at the Asan Institute, said. “Washington would probably want to send inspectors anytime and see any facility they want, or to have jeeps traversing the country daily to make sure there’s no nuclear proliferation. But for Seoul and Beijing, an agreement on a [nuclear] freeze and a gradual process — swapping paper and talking a lot — might be sufficient.”

Even in the long run, there’s some disagreement on whether North Korea will ever denuclearize — both among experts and analysts, as well as South Korean citizens who have so far lived through tumultuous, ever-changing relations. As far as history can tell, their doubts do make sense: In exchange for aid, North Korea agreed to abandon its pursuit of nuclear weapons in the 1994 Agreed Framework, but the deal fell apart because North Korea continued to enrich uranium to make nuclear bombs (U.S. aid was also slow in coming).

“In my opinion, denuclearization is not possible at all,” Choo So-young, a 23-year-old office worker from the southeastern city of Daegu, said in an interview. “I’m positive about other things, but we are in a situation where we can’t feel completely at ease. We should still keep our guard up.”

“I don’t think North Korea is going to give up its nuclear weapons. That would be insane, and I don’t think Kim Jong Un is insane,” Ward agreed. ”[Kim Jong Un] is saying what the Americans and the South Koreans want to hear.”

North and South Korea are still technically at war. Is a peace treaty in the cards?

It’s a possibility — and one that dominated headlines when the Munhwa Ilbo, a South Korean newspaper, reported that an unnamed official said the leaders might pen a joint statement that seeks “to ease military tension and to end confrontation.” Though it’s just one report, a joint statement like the one the Munhwa Ilbo described wouldn’t necessarily be far-fetched. The Korean War halted with an armistice agreement — basically a truce — back in 1953, and only a few small-scale skirmishes have happened since.

“I’m really optimistic that we could end this war,” Lee Do-Jae, a 54-year-old academic researcher from Suwon, said. “I think [the summit] is the foundation and the fertilizer for peace.”

“A treaty has been an objective since day one,” C. Harrison Kim said. “If this truly happens, it will be a monumental, watershed moment, at least from the perspective of unification and peace,” Kim said. “You don’t really need a peace treaty to have healthy, robust trade or diplomacy, but symbolically, the value of a treaty would be truly great.”

How are South Koreans reacting to the summit?

The upcoming summits are an opportunity for Moon, Kim and Trump to look like winners to their constituents. Moon’s approval ratings polled as high as 70% according to data released April 20, and some have even started to float the idea of awarding him a Nobel peace prize (previous South Korean President Kim Dae-jung won the prize in 2000 for similar pursuits of inter-Korean peace).

“It’s not normal to telegraph this much information ahead of a meeting, and largely because it builds very high expectations,” Town explained. “My best guess is [the Moon Administration] is doing this to distract from domestic turmoil that’s going on.”

When asked about the upcoming summit on April 27, several South Korean citizens were hesitant to preemptively declare victory.

“I honestly am not expecting that much. I think this summit is necessary to have a conversation, but I don’t think there’s going to be a definitive solution that comes out of it,” Shin Jae-woo, a 27-year-old biology student from Daegu, said. “This kind of thing can be just a big show.”

“Not all Koreans are excited about this [summit],” agreed Lee Do-Jae, the academic researcher from Suwon. “The most important thing that people care about is the economy. … Life in Korea right now is difficult in many ways. There are people who are struggling to eat and live.”

However, surveys show that most South Koreans are anything but opposed to a Kim-Moon meeting. More than 81% of South Koreans support a summit with Kim Jong Un, while more than 70% doubt that North Korea will denuclearize, according to recent polls cited in the New York Times.

“I used to live in Australia, and people would always bring up stories about North Korea and what happens to people there. It would always embarrass me — when talking about South Korea, everyone always talks about North Korea first,” Hong Jin-ho, a 32-year-old baker from Busan, said. “So, I think it’s very good for us to have this kind of positive news. I’m optimistic that this [summit] could work.”

Ward said he sees three possible outcomes: In one scenario, the U.S. and North Korea sign an agreement to negotiate denuclearization and leaders of all party countries — North Korea, South Korea, the U.S. and China — look like winners. But in that scenario, Ward is concerned that China will “use [negotiations for denuclearization] as an excuse to stop enforcing sanctions,” which could mean that North Korea never actually cooperates because it’s no longer under extreme economic pressure. In another scenario, there’s no agreement at all. And the third scenario is “somewhere in between those two.”

“I find the rhetoric over the summit to be ridiculously overhyped,” he said. “Everyone is going to have a strong interest to spin a very positive line for themselves, but I fear we will be back to square one in a couple years.”

But others, such as C. Harrison Kim, said they believe the summits could yield more positive outcomes.

“We could probably imagine tourism reopening, with possible visits to Pyongyang and other parts of North Korea from South Korea. More family reunions, more business going back and forth, importing and exporting of North Korean goods — and many of these things aren’t new,” Kim said. ”[The relationship] has gone up and down.”

“I think this is the best situation we have ever seen, where both sides and the U.S. are freely talking about the nuclear issue and possibly a peace treaty at the same time,” he added. “In my lifetime, I have not seen this kind of opening up.”