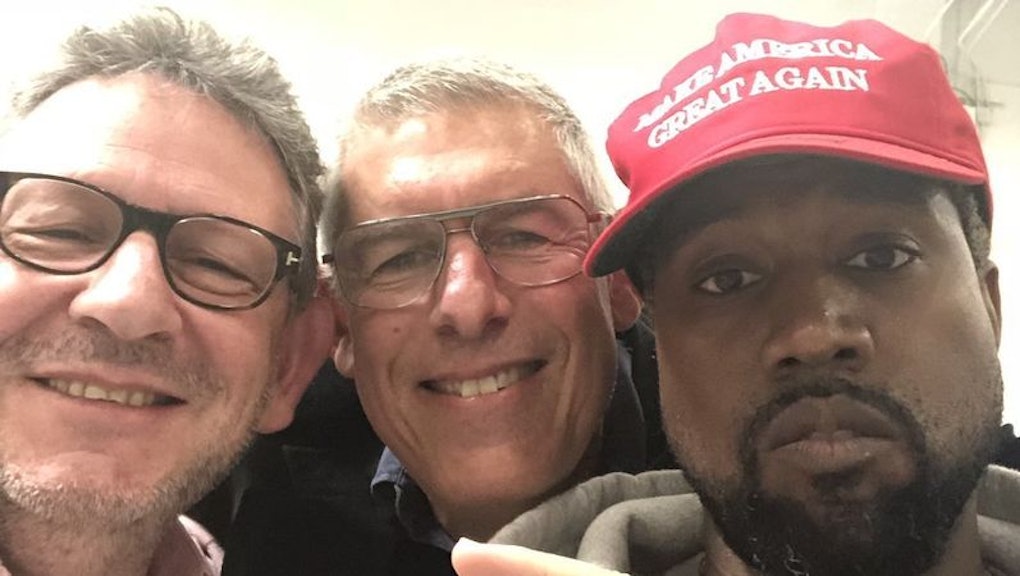 Since Kanye West returned to Twitter on April 13, he has tweeted 200-plus times (as of publication). The outpouring has, for the most part, been a mix of self-promotion, philosophical musings, inspirational platitudes and questionable politics — the latter of which overshadowing everything else and drawing both outrage and confusion.

Provocation, of course, is nothing new for West, who cast himself as both the bull and the matador in a 2015 Steve McQueen-directed video for “All Day” and “I Feel Like That” displayed at the Los Angeles County Museum of Art. Pissing people off has been as central to West’s career as his production and aesthetic choices. But he is entering a fragile firmament, and announcing his enthusiastic (though ever-so-slightly couched) support for President Donald Trump, as he did on Wednesday, gives the feeling of dangling an enormous red flag in front of an aggrieved bull.

Or a red hat, as it were. If you were fortunate enough to have been offline yesterday, let’s back up. On Wednesday, West posted a picture of himself donning a red Make America Great Again hat on Twitter and professed his love for our controversial, lizard-brained — er, “dragon energy” — 45th president. This came after West, earlier in the week, endorsed far-right internet commentator Candace Owens’ thinking and posted frequent Infowars guest Scott Adams’s videos.

This was not the first time West has backed Trump (he did so a couple times at the end of 2016 — during a concert, and then again in meeting with Trump), but his past flirtations with the president gave the impression of spontaneity; they came before Trump took office, during a tumultuous period for West. It was conceivably easier to write off.

This more recent support for Trump is more confounding. How could one of the 21st century’s most visionary artists not see the dumpster fire before him for what it is? And more than that, West is the son of civil rights activists. He’s the guy who went off script during a nationally televised Hurricane Katrina relief telethon to say, “George Bush doesn’t care about black people.” American racism is an ongoing motif in his lyrics. How could he now support someone with such a long, explicit history of bigotry (not to mention someone who has botched Puerto Rican relief at least as badly as Bush did New Orleans)?

Though some have connected West’s recent unpredictable behavior with alleged mental illness issues, that seems both unfair and unnecessary. West’s support for Trump makes sense in ways that are sane and transcend politics. For one thing, supporting Trump is contrarian, which is very on brand for West. For another, there’s a lot of Kanye in the Donald: Each is irreverent, often misogynistic and extremely egotistical. And neither can be managed.

But the timing of Kanye coming out from the shadows to give voice to the power of “free thinking” also can’t be discounted. A few days after rejoining Twitter, he announced that his tweets were all in service of a book he was writing in real time. And then a day later, after he’d espoused a solid chapter of what I hope will be titled Zen Mind, Yeezy Mind, he announced a series of albums he would be releasing both as an emcee and producer. Did he rejoin Twitter to inspire, provoke or promote?

With West, these things have always worked in tandem. He, perhaps better than any other modern pop star, has made art out of paratext and paratext out of promotion. His work has always been more predicated on style and concepts than on bars. Pink polos and backpacks are as much apart of College Dropout and Late Registration as the interlude skits or the horns; the 2010 “Good Friday” singles work adjacent to My Beautiful Dark Twisted Fantasy; The Life of Pablo was released through a fashion show, and the music was overshadowed by the idea that the album was “living” (it could be continuously updated). For Kanye, marketing is an art form (e.g. projecting “New Slaves” onto buildings around the world ahead of the release of Yeezus) while art is a form of self-promotion (i.e. floating above everyone in the Life of Pablo tour).

So can we separate the art from the artist? With West, certainly not. Everything West does is perceived as “the art.” It’s almost impossible to locate a chasm between private Kanye and public Kanye. Forget old and new Kanye; is there even a real Kanye?

It’s Kanye West’s continuous reinvention of Kanye West, plus his sonic and stylistic precognition, that has enabled him to expand hip-hop and simultaneously maintain relevance within the genre longer than any of his peers or predecessors. As a result, it can be hard for some to question him. He is this generation’s “advanced genius.” In a review of Yeezus, Lou Reed raved, “No one’s near doing what [West]’s doing, it’s not even the same planet. ... He keeps unbalancing you.” So could it be that we’re simply being unbalanced right now?

Well, you know, it’s possible that this is part of some subversive five-part plan and ... no. No, of course it isn’t. Kanye’s support for Donald Trump and a menagerie of odious half-baked ideas doesn’t unbalance or even offend me so much as it just annoys me. It strikes me as uninspired, desperate and out of touch. This is the nucleus recognizing it has been reduced to membrane, and trying to regain its status through approximation.

At this point, I’m not sure if Kanye believes in the troublesome ideas he’s boosting or not (he says he didn’t vote for Trump, after all), but I don’t think it even ultimately matters; he’s aiming to get a reaction and he’s aiming for relevancy. In both pursuits, mission accomplished: He’s trending, dominating media coverage, even being praised by Fox News.

But Trump is a dangerous leader, not a cool new aesthetic. And for Kanye, using him as such threatens to undermine rather than elevate the music he’s presumably promoting. Even worse, though, he is propagating and vindicating toxic right-wing ideas. For once, he appears behind the curve, a follower and not a leader.