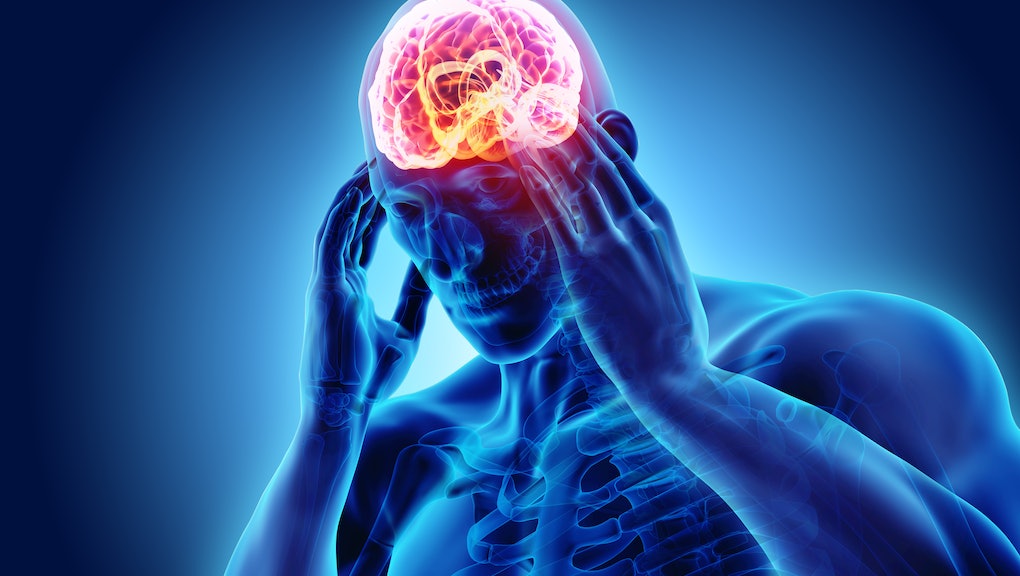 Massive numbers of Americans experience migraines — throbbing head pain, often accompanied by nausea, sensitivity to light or sound and other grueling symptoms. In fact, migraine attacks are thought to be the world’s third most prevalent illness, and scientists can’t seem to find one catch-all cure. An estimated 12% of the total U.S. population gets migraines according to the Migraine Research Foundation. And unfortunately, popping an Excedrin or taking a nap doesn’t always solve the problem.

That’s why many Americans are pouring money into solutions that often don’t work. In a for-profit world, conventional medicines are often shelved alongside crystals and “100% natural, handcrafted apothecary candles” — despite the lack of scientific evidence supporting those treatments.

But it’s not that migraine sufferers are easily duped — they’re often just desperate for any kind of relief.

“It’s one of the most common neurological plights of all,” said Stephanie Goldberg, a neurologist and board-certified headache specialist at Tufts Medical Center in Boston. “No patient dies from a migraine attack, but it certainly is debilitating to the point that these patients cannot live because they’re in constant pain.”

Migraines have become an increasing concern in the American digital age, especially in a time when U.S. parents spend an average of nine hours and 22 minutes a day in front of screens. The bright, often blue light of computers and handheld electronics are thought to trigger them, as is neck strain from looking down at devices. But humans living more than 3,500 years ago may have also experienced migraines, according to ancient Egyptian medical records that spoke of “shooting head pains” in roughly 1200 BCE.

Ever since that time, the remedies put forth for headaches and migraines have often been just as wacky as today’s energy healing and rose quartz collecting. Imagine slathering a paste made of live worms on one’s forehead or surgically implanting garlic inside a patient’s temples.

It’s a little less messy these days, but science doesn’t yet have the tools to ensure treatment outcomes are totally successful.

“We’re learning more and more about what happens in the brain of a patient during a migraine, but we probably still don’t know enough,” Goldberg said. “Because of that, it leads to challenges with treatment.”

Migraines are thought to have an underlying genetic cause, but triggers are what actually push people into the red zone. The condition is so hard to treat, however, because triggers vary from individual to individual, and patients are left to discover them on their own. Common ones include sudden weather changes — a downpour of rain or a sudden change in temperature — as well as a lack of food or sleep, stress, greasy foods with MSG, alcohol (particularly red wine), peanuts and artificial sweeteners.

But be warned: Just because a person finds that a certain food triggers them doesn’t mean that they’re allergic to it. If a doughnut appears to be the culprit for an individual’s migraines, they shouldn’t then assume that they need to go on a gluten-free diet. There are likely other factors at play in that food — its sugar content or its greasiness, for example.

“Usually in an allergic reaction, there’s also a systemic reaction. You may develop a rash or diarrhea or things like that,” Goldberg said. “If you consistently develop a migraine after being exposed to something, we consider that a ‘trigger.’ We don’t use the term ‘allergy.’”

After compiling a list of non-prescription migraine treatments commonly suggested online, Mic asked Goldberg which are scientifically supported and which sound questionable. Some of the treatments have no significant research backing them at all, but won’t necessarily hurt if migraine patients try them — others, however, were quick to receive a hard “no.”

Of course, migraine patients should consult their doctor — who has a more personalized and detailed view of their individual health — before using any of these remedies.

Birth control (for women): This one’s a wild experiment, according to Goldberg. “It may improve, it may not do anything and it may make it worse,” she said. “Each person responds differently.”

Caffeine: “In moderation, as needed, can help,” Goldberg said. “If it’s on a daily basis and in significant amounts or quantities, it makes it worse.” In other words, daily coffees may not be a migraine remedy — in fact, it can make patients fall into a dependency trap. Certain formulations of over-the-counter medications like Tylenol and Excedrin also contain caffeine, so migraine sufferers should exercise some caution when drinking their daily brew.

Ice packs (on the forehead or the back of the neck): Ice packs might help, and — when applied properly — they almost certainly won’t hurt. “Basically, you are stimulating other sensory receptors and almost like the attention of the brain,” Goldberg said. “It may provide only a short-term relief, but it’s something so easy to do that it’s worth trying.”

Daith piercings: Though a little ring may look good on the cartilage near the center of the ear, “we don’t have studies supporting [daith piercings],” Goldberg said. Some of Goldberg’s patients have reported short-term improvement, but migraine sufferers are also advised to consider the potential risks and the daily care required for piercings.

Green tea: If the purpose of drinking green tea is to get some caffeine, it may make sense. “I’ve never heard that any other component of the green tea have properties to help migraines,” Goldberg said.

Peppermint or lavender essential oils: “For migraines, we have no proof [it works],” Goldberg said. However: “If patients feel that it’s beneficial for them, it’s certainly not going to hurt.”

Butterbur herb: When it comes to preventing migraines, butterbur — a shrub that grows in Europe and some regions of North America and Asia — “is considered the most effective” of complimentary treatments, Goldberg said. Butterbur has an A-level rating from the American Headache Society, though there are also some prescription medications that also do. But it also has its potential side effects: Butterbur is not regulated by the FDA, so doctors can’t control the amount of alkaloids in its plant extract. Some studies suggest that higher levels of alkaloids in butterbur could cause liver toxicity, which can damage the organ.

Feverfew herb: The American Academy of Neurology and the American Headache Society consider feverfew — also known as MIG-99 — as less effective than butterbur. Both bodies graded butterbur to have A-level effectiveness (the best possible score), while feverfew is rated as a B-level treatment.

Magnesium and B2 Vitamins: Both are viable options for preventing migraine attacks or reducing the severity of migraine pain, Goldberg said: “The American Headache Society recognizes and recommends using it on a daily basis.”

Coca-Cola or other sodas: Sodas are likely recommended because of their caffeine content, but they come with far more disadvantages than a cup of green tea or black coffee. “There’s no component [other than caffeine] in Coca-Cola that would be helpful, and certainly artificial sweeteners in diet sodas should be avoided. They’re known to be a trigger for migraines,” Goldberg said.

Acupuncture: “There’s no significant data proving that it helps, though there are some patients that do respond,” Goldberg said. The downside: Insurance usually doesn’t cover acupuncture, and a single session can cost more than $100.

Botox injections on the forehead: “Botox has been extensively studied, and we have seen a benefit to it,” Goldberg said. She added that it’s an FDA-approved treatment for people with chronic migraines — head pain 15 days or more a month — and insurance generally covers it as frequently as once every 12 months. In some cases, patients can get special approval to receive Botox once every 10 weeks, Goldberg said, but more frequent injections can cause a resistance to Botox’s chronic migraine-soothing effects.

And yes, it will have a cosmetic effect. “A lot of people think that Botox relaxes the muscles and therefore releases the pain. No, it has nothing to do with that,” Goldberg said. “But [muscle relaxation] is a fact we can’t avoid.”

Goldberg recommends that patients who are receiving Botox for chronic migraines let their physicians know if they don’t like how it makes them look. The effect will wear off, and doctors can always inject the Botox fluid higher into the forehead to avoid more noticeable changes.

Detox baths (with apple cider vinegar, essential oils or baking soda): It probably won’t hurt, but it probably won’t help either. “I’ve never heard anything about it, and we don’t have scientific support for any of that,” Goldberg said.

Cayenne pepper or ginger: When it comes to treating or preventing migraines, “neither have been studied specifically in patients with migraines, so we don’t recommend it as treatment,” Goldberg said.

Acupressure (on the hands or elsewhere): Similar to acupuncture, acupressure might help patients relax their minds and bodies in a way that’s therapeutic. But it likely doesn’t cure migraines in the long term. “It’s not going to hurt to try, but we don’t have any significant support that it works,” Goldberg said.