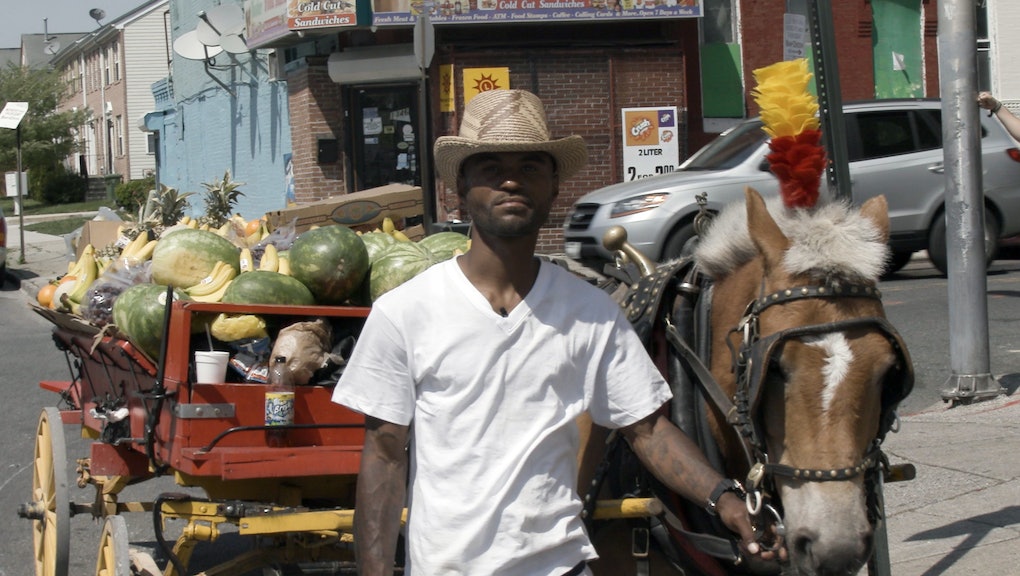 The black Baltimore arabber tradition is on its last leg. For the city’s sake, it should continue.

BALTIMORE — James Chase begins most days at one of the city’s few remaining horse stables on Fremont Avenue. Located in the heart of West Baltimore, the stable is more of an urban barn surrounded by row homes and other dwellings, some of them abandoned and boarded up.

On a recent morning, just inside the stable’s chain-link fence, there were several horses, potbelly pigs, turkeys, chickens, pigeons, a billy goat and an alpaca, who apparently thinks they’re a horse.

“When I let [the horses] out and they get to running up and down here, she’ll get to running with them,” Chase said, smiling as he shoveled manure from one of several horse stalls.

It’s from this stable that the 44-year-old Chase and a small, largely African-American group of men maintain the tradition of “arabbers” — street peddlers who sell fruits, vegetables and other perishable goods from horse-drawn carts. The industry has existed for centuries in East Coast harbor cities in the United States.

Although arabber numbers have been on decline for several years, the tradition continues to provide economic opportunity to people who might otherwise be left behind in the evolving local job market. In a city with a reputation as one of the nation’s most violent, being an arabber has saved some participants from leading lives that might have seen them chronically unemployed, in and out of prison or dead. The city’s mayor has promised to create opportunities that steer men and boys toward jobs and away from crime and violence. However, in recent years, the tradition has been strained under city-imposed regulations that weren’t in place when the arabbers thrived on pure entrepreneurial spirit.

There is also a fear within this majority-black city of over 611,000 residents that arabbers could fade completely, within another generation — after which young Baltimoreans and tourists might only learn about the historic tradition in museums and documentary films. In an interview, Chase, who has been an arabber since he was 5 years old and is now a father to six children, said he has watched active arabber numbers shrink from as many as 50 men to just a handful.

“I did this my whole life,” Chase said. “You know, I had odd jobs and stuff like that, but this was the main source of my income. This is my livelihood. This is what I do.”

Chase is part of the Arabber Preservation Society, a donor-supported nonprofit organization established in 1994 to keep the tradition alive.

The origin of the term arabbers isn’t conclusive — it is said the term derives from the 19th-century British street Arab who wandered port cities selling small objects. According to some Maryland historians, the term “arabbers” stuck with Baltimore, which was home to the second largest immigrant port on the East Coast, even though horse-drawn cart vendors existed in New York City and other cities.

In Baltimore, the tradition is distinguished by colorfully decorated carts or wagons that are pulled by horses fitted with sleigh bell harnesses. The arabbers themselves draw customers’ attention by calling out what they’re peddling, often with a singsongy flare.

“Watermelon, cantaloupe, peaches, all sort! ’Nana, ’nana, ’nana!” Chase shouted in demonstration. “Get out your pots and pans, ’cause here comes the fish man!”

Arabbers interviewed for this story couldn’t say exactly how much money they make monthly or annually. But a day’s haul can net hundreds of dollars through a number of transactions, one experienced merchant said.

In the past, arabbers have battled city officials and humane society activists, who are against the idea of making animals work. In 2015, city health and animal control officials raided stables and seized 14 horses. The city state’s attorney charged six people with animal cruelty, the Baltimore Sun reported back then. The charges came after officials alleged that some arabbers kept animals in poor living conditions, including excessive cobwebs at stables. The stable that Chase manages was not involved in the raid.

More than a year later, the criminal charges against the six were dropped. But their horses were not returned. Meanwhile, the city’s animal control department imposed regulations and began working closely with the arabbers, the city said, to ensure the safety of the horses. Today, this means the cost to have veterinarians regularly check the teeth, feet and overall health of the horses is absorbed by the arabbers. Some of the men, including Chase, have acknowledged the regulations contributed to a drop in their ranks.

That was never the goal, Baltimore animal services director Sharon Miller said in a recent interview.

“If somebody starts seeing an animal that’s unfit, that’s going to be bring negative light on the arabber industry,” Miller said. “And we don’t want that to happen. We don’t say, ‘You have to abide by the regulation and this law, good luck.’ No. [We say,] ‘Let me find a veterinarian for you. Let me help you find a dentist. And let’s work this out.’”

Chase recently described his relationship with the city as decent. “Once I started getting in good with ’em, everything’s been great for me,” he said.

But if arabbers were completely driven out of their stables for good, it’s not clear how much opportunity they’d find in a city that isn’t evolving to accommodate horse-drawn cart vendors. According to an economic indicator report, the city saw “positive signs” of growth at the end of 2017. Still, the unemployment rate increased from 5.1% in September to 5.8% in December; the national unemployment rate was 4.1% in December.

In her State of the City address in March, Baltimore Mayor Catherine Pugh called on businesses to finance a $1 billion investment fund that would be used to rehabilitate neighborhoods, like the one that surrounds the Fremont Avenue arabber stable. High crime and violence rates — Baltimore recorded 343 homicides in 2017 — is a major hurdle, Push said in the speech. But crime, police brutality and unemployment problems would not change significantly without the investment, she said.

The Pugh administration also put emphasis on improving the condition of Baltimore’s black men and boys. In February, Pugh announced the creation of the Office of African American Male Engagement, which seeks to pair that demographic with role models.

For young men like 29-year-old Bilal Yusuf Abdullah, who goes by B.J., role models have been the fathers and grandfathers who were arabbers before them. B.J., who is arguably the city’s most well-known active arabber, said the tradition is keeping him off the street corners and out of trouble.

On a recent Thursday, B.J. headed east from the Fremont Avenue stable with a cart full of oranges, bananas, tomatoes, red onions, watermelons, cantaloupes, grapes, pineapples and strawberries. Customers, young and old, beckoned to B.J. from their building stoops and purchased a single orange or banana for $1. Melons went for as much as $10.

Some of B.J.’s customers have disabilities. Near the intersection of North Calhoun and Mosher streets, B.J. stopped his horse, as an elderly man leaned out of a second-floor window and let down a small bucket tied to a string. B.J. pulled the man’s money out of the bucket and deposited a bag of red grapes.

There were a couple instances when B.J. slyly handed a single banana to children, without asking for payment.

“A lot of kids be asking me can I take ’em with me,” he said in a recent interview. “I normally take kids with me in the summertime.”

But even with interest from the kids — and a recent block party that raised money for the arabbers’ Baltimore stables — B.J. said he thinks even more support from the general public would help extend the life of the tradition well beyond his own prime years.

“As long as the city see that people [are] supporting us... they’ll try to keep us around more.”