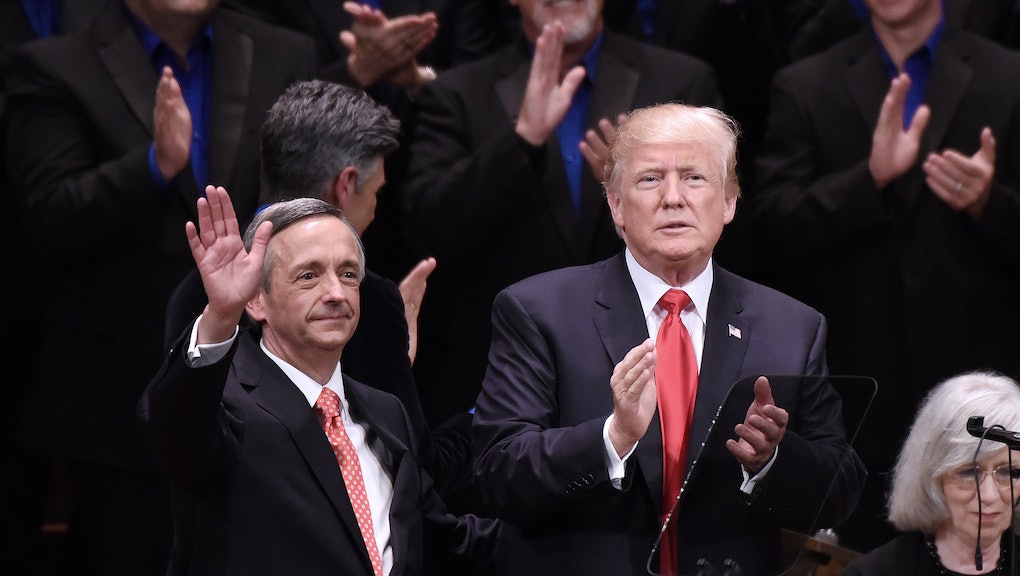 The Anti-Defamation League issued conflicting statements Monday both praising and denouncing President Donald Trump before the much-touted, historic opening of the new U.S. Embassy in Jerusalem.

The ADL, the premiere Jewish advocacy group, celebrated the Trump administration’s controversial and highly-politicized decision to move the embassy from Tel Aviv. The move is seen as a recognition of Jerusalem as the capital of Israel — which President Trump affirmed in a video speech aired at the embassy opening.

The move on the part of the U.S. has drawn ire from the Muslim world and the United Nations, leading to deadly protests in Gaza along its border with Israel. Many countries, organizations and individuals view Jerusalem as disputed territory that should be subject to negotiations with Palestinians.

Despite this praise, the ADL was also critical of Trump for allowing controversial evangelical pastor Robert Jeffress to deliver a prayer at the event, for which the president didn’t even bother to show up.

Jeffress, a Christian fundamentalist and one of Trump’s first and most loyal religious supporters, has previously been denounced by the ADL and civil rights groups for making inflammatory statements such as, “You can’t be saved by being a Jew” and “Islam is a false religious system” led by “Satan himself.” Jeffress has also said gay people are more likely to be pedophiles than heterosexuals.

“Jeffress is an unrepentant religious bigot who has a history of making hateful comments about Jews, Muslims, Christian[s] and other religions,” the ADL wrote in an emailed statement. “On this historic day of celebration, we need prayers of peace, hope, openness and respect. The choice of Jeffress sends exactly the wrong message.”

In 2017, the ADL blamed Trump for a major spike in anti-Semitism, specifically criticizing the president’s retweeting of anti-Semitic memes.

“Those tweets and rhetoric have emboldened and given encouragement to the worst anti-Semites and bigots,” ADL spokesman Jonathan Greenblatt said in February.

During his four-minute prayer at the embassy opening Monday, Jeffress invoked both “the Messiah” and Trump.

“Israel has blessed this world by pointing us to you, the one true God, through the message of her prophets, the scriptures and the Messiah,” the pastor said. “Without President Trump’s determination, resolve, courage, we would not be here today,” Jeffress added moments later.

The Messiah that Jeffress referred to is Jesus Christ, the Judeo-Christian prophet Jewish worshippers do not recognize as the Son of God.

Jeffress responded to his critics in an interview with Fox News shortly before his speech, saying his past comments correspond with his Christian beliefs.

“These were comments ripped out of context from years ago,” Jeffress said. “Historic Christianity, for 2,000 years, has taught that salvation is through faith in Christ alone. The fact that I and tens of millions of evangelical Christians still believe that is not bigoted and it’s not newsworthy.

“Today I’m talking about the common bonds between Judaism and Christianity,” Jeffress added. “The Jewish people here in Israel will tell you evangelical Christians are their most faithful and ardent supporters. Today we’re talking about unity, not disunity.”

At least 43 Palestinians were killed by Israeli forces in Gaza on Monday, CNN reported.