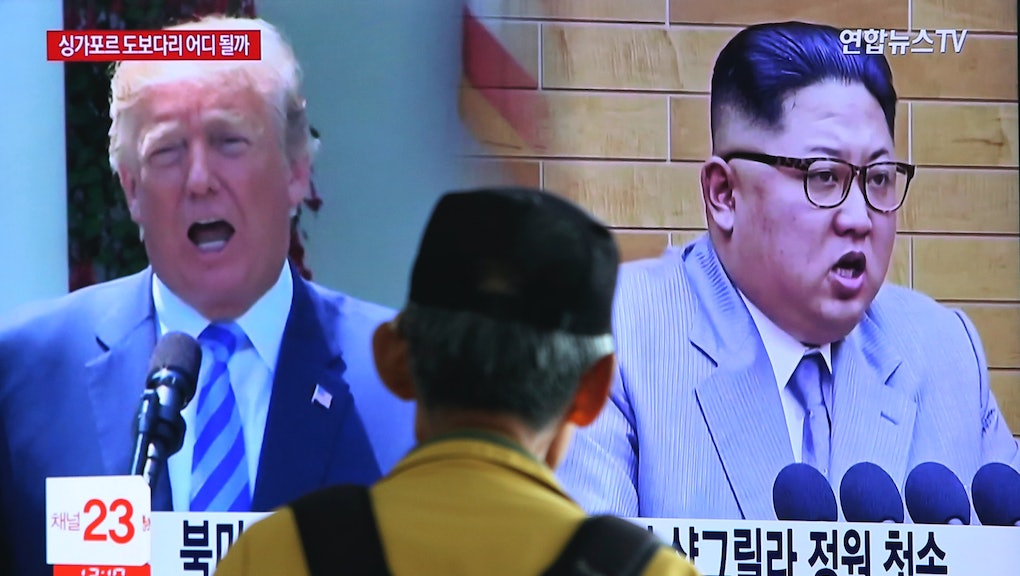 Is North Korea’s threat to cancel its meeting with Trump understandable or scheming?

SEOUL, South Korea — When it comes to dealing with North Korea, the volatile situation can unravel very quickly for the United States.

On Thursday, President Donald Trump and Kim Jong Un announced a historic face-to-face meeting in Singapore, slated for June 12. Less than a week later, North Korean state media is saying that there may be no meeting at all.

North Korea’s KCNA threatened on Tuesday to scrap the upcoming summit, in light of “provocative military ruckus jointly conducted with the South Korean authorities.” In other words, the routine U.S.-South Korea joint military exercises that started on Friday, which range from computer simulations to war-jet test flights, seem to be displeasing Kim. Though KCNA withheld any threats during the first few days of the exercises, it appears that the drill’s use of high-powered “strategic assets” like B-52 bombers and F-15K jets is once again contentious, experts say.

“It’s a bit excessive, given the current political environment,” said Jenny Town, managing editor of North Korea analysis site 38 North and former assistant director of the US-Korea Institute at Johns Hopkins University. “The North Koreans expect that, if the political situation is good, there will be a certain level of political signaling. … Strategic assets aren’t really a signal of improved relations.”

With North Korea’s secretive regime, true intentions are never clear. On one hand, the warning could be mere political maneuvering to squeeze more concessions — such as relief from economic sanctions — out of the United States at upcoming talks.

On the other hand, North Korea might be genuinely angry — and in many ways, it has a right to be. In late April, Kim Jong Un pledged to freeze nuclear and intercontinental ballistic missile testing as well as shut down a nuclear test site. Meanwhile, the U.S. has done very little in return and has continually stressed its “maximum pressure” policy of economic sanctions against the North.

“If you actually listen to the North Koreans, [negotiations are] expected to be a reciprocal process,” Town said. “This isn’t just North Korea unilaterally denuclearizing. If North Korea is making all these grand gestures, they at least expect a little good will — if not actual actions.”

From North Korea’s perspective, recent events, including the drills, don’t indicate the beginnings of a negotiation at all. And the mixed messaging form the U.S. isn’t very reassuring, either: Secretary of State Mike Pompeo stated that the U.S. must give North Korea “security assurances” after meeting with Kim, but national security adviser and former Fox News commentator John Bolton publicly said that the Trump administration is planning to follow the “Libya model.” That refers to a 2003 agreement where the U.S. gave Libya security assurance in exchange for nuclear disarmament — only to support rebels who assassinated Libya’s leader, Muammar Gaddafi, in 2011. To Kim, this could indicate a forewarning of American betrayal.

“The U.S. has got to get their messaging in order and stop this sort of contradiction from cabinet member to cabinet member,” Town said. “Bolton should be much more conscious of what he’s saying and make sure that it actually aligns with U.S. policy.”

So, is North Korea scheming?

Angry or not, there’s a strong possibility that North Korean leaders are also threatening to cut the Trump-Kim meeting in hopes of gaining leverage. Peter Ward, a Seoul-based columnist at NK News and a former researcher at the Asan Institute, believes that Pyongyang could be trying to drive a wedge between China and the United States — especially after Kim’s two recent meetings with Xi Xinping.

“They want a better deal and they believe they can get a better deal,” Ward said. “Relations are improving with China, and I think this is a sign that [North Korea] thinks it’s in a better position than a couple of months ago to negotiate on sanctions enforcement.”

Ward adds that it was a bad idea to pull out of the Iran nuclear deal, then enter similar negotiations with the North Koreans. “I think it was also a bad idea to start a trade war with China while starting to negotiate with North Korea,” Ward said. “It could not be more poorly timed. God bless the [U.S.] president, but I don’t quite know what he thinks he’s doing.”

For now, everything is still going as planned. White House press secretary Sarah Huckabee Sanders has stated that the Trump administration is “still hopeful” the June 12 summit will take place.

“If they really objected to the point where they weren’t willing to have a summit, it would have come from Kim Jong Un and it would’ve been done before the drill started,” Town said. “Right now, it’s more so a political signaling of unhappiness.”