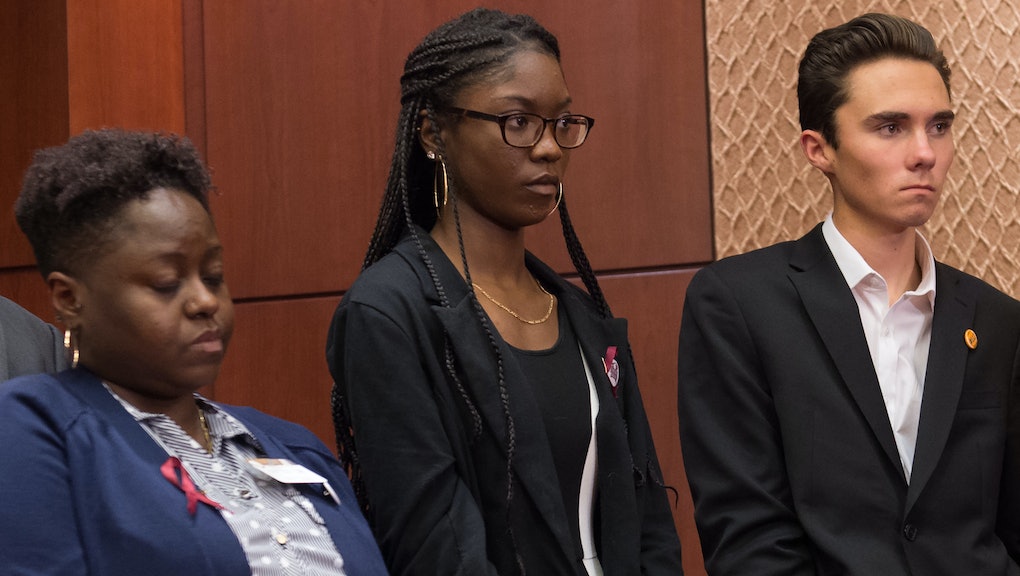 June is Gun Violence Awareness Month, a time of year when warmer weather coincides with a rise in shootings in urban communities across the U.S.

It’s also a time when anti-gun violence advocacy groups often accelerate their activism. Parkland, Florida, shooting survivor Aalayah Eastmond, who is black, was compelled to join these efforts after escaping the massacre at Marjory Stoneman Douglas High School, where a former student killed 17 people on Feb. 14.

On Saturday, Eastmond will help lead New York City’s Youth Over Guns March against gun violence affecting predominately black and Latino communities. According to Eastmond, none of her Marjory Stoneman classmates or fellow March for Our Lives organizers, including David Hogg and Emma Gonzalez, plan to participate in the march with her, to her knowledge.

“They often say they want to highlight other types of gun violence [besides school shootings],” the 17-year-old said of her fellow shooting survivors. “I personally haven’t seen that. I don’t feel like they are sharing their platform enough. If they’re not going to do it, I’m going to do it. Although I don’t have the same amount of followers as them, I will try to give as much attention as I can to communities of color.”

To be fair, Eastmond’s more famous Parkland peers have indeed participated in discussions with black activist students about the far more pervasive inner-city gun violence that impacts non-white residents in cities like Chicago. Other organizers of Saturday’s march told Mic that communication between Youth Over Guns activists and Never Again movement organizers have taken place in recent weeks.

It’s unclear if any Never Again activists were actually invited to Saturday’s march, but Stoneman Douglas graduate Matt Deitsch — whose brother, Ryan Deitsch, is also a Parkland shooting survivor — plans to amplify news about the event on social media. Eastmond was bothered nonetheless that she didn’t receive more of her famous Parkland classmates’ support after she agreed to speak at the March for Our Lives in Washington, D.C., on March 24.

“It would always be great to get support from people you go to school with, but that’s not how this is working out,” Eastmond said. “I don’t really talk to them. They don’t talk to me. I don’t see them really that often in school.”

During the February attack, Eastmond hid under the body of one her dead classmates, Nicholas Dworet, to avoid being shot. Her mother, daycare worker Stacey-Ann Llewellyn, was laying in the bed of her Coral Springs, Florida, home that morning when she received a panicked phone call from her only child.

“‘I’m going to die.’” Llewellyn recalled Eastmond saying. “’I love you. I’m sorry for everything I ever done.’ I said, ‘God if you take her life, take mine too.’”

It was seven hours before authorities let Llewellyn and Eastmond reunite at a Marriott Hotel near the school, after forensic investigators had gathered all the evidence they needed from the teen, who was covered in the blood of her fellow students.

But it wasn’t the first time the family had experienced a gun-related tragedy. Llewellyn was living in Brooklyn, New York, in 2003 when her brother, Patrick Edwards, was killed in a street shooting at age 18. Eastmond was only 2 years old at the time.

The two incidents illustrate both a link and a disconnect in America’s ongoing gun violence debate. The lives taken in the unprecedented series of school shootings in predominantly white and suburban communities like Parkland, Florida, Great Mills, Maryland, and Santa Fe, Texas, represent a small fraction of the nearly 13,000 gun homicides that occur every year in the U.S.

It’s why Eastmond agreed to join Harlem, New York, high school student Ramon Contreras at Saturday’s march, which he and other New York students organized after participating in the nationwide anti-gun violence school walkouts on March 14. Contreras is a senior at Kipp College Prep High School. His friend — football star Tylik Allen, 18 — was fatally shot three blocks away from his Harlem home in October.

After the March 14 walkout, Contreras said he was dissatisfied with the media narrative around school shootings.

“A lot of the schools covered by the media were just white kids,” Contreras said over the phone. “That made me question whose voices are really getting heard on this issue.”

The distinction between school shootings and more routine forms of gun violence isn’t just important because school shootings make up a small fraction of the bigger picture. Experts like Iesha Sekou, founder of the Harlem-based Street Corner Resources anti-gun violence group, say the most effective proposed solutions to these twin problems are quite different.

“Gun violence extends beyond the pull of a trigger,” Sekou said over the phone. “The root of it is poverty, the lack of investment into our urban communities, public education and local grassroots organizations.”

Sekou founded Street Corner Resources in 2005 to address gun violence in Harlem, which has dropped dramatically since then. The 10-block area Sekou’s organization serves in Central Harlem celebrated going almost a year without a murder in October and Sekou says they’ve extended that streak to 706 days.

She credits a combination of well-funded social engagement programs like hers and New York City’s community policing model for the reduction in gun violence, though many in the black activist community have still been critical of the NYPD.

“I think that community policing does work,” Sekou said. “I can’t say it’s perfect, but I see young people, some, talking more with the police, like just in regular conversation, not snitching stuff, but conversation. ... Not every cop is a killer and not every kid on the corner is a criminal. [We’ve] got to find a middle of the road and see each other as human beings.”

Sekou said limiting the flow of guns into urban communities and having less guns on the streets are important changes to make, but also said that access to firearms is just one of the elements that fuel gun violence. Debates around this issue need to focus more on the inequities that fuel poverty in black communities, which leads to a sense of hopelessness and a cycle of violence among youth.

“The trigger is pulled long before the trigger is pulled,” Sekou said. “Kids feel like they need to fight block by block because they don’t own anything. They claim a project floor or a block. They fight over that. They have misdirected anger and aggression.”

These are the messages that Eastmond plans to amplify with her post-Parkland platform, as she continues touring the nation this summer.

The high school junior says she wants to pursue a career in law after she finishes college and has no intention of stopping her anti-gun violence mission any time soon.

“My goal as myself is just to bring light to gun violence in urban communities,” Eastmond said. “I’m not going to stop until my mission is finished.”