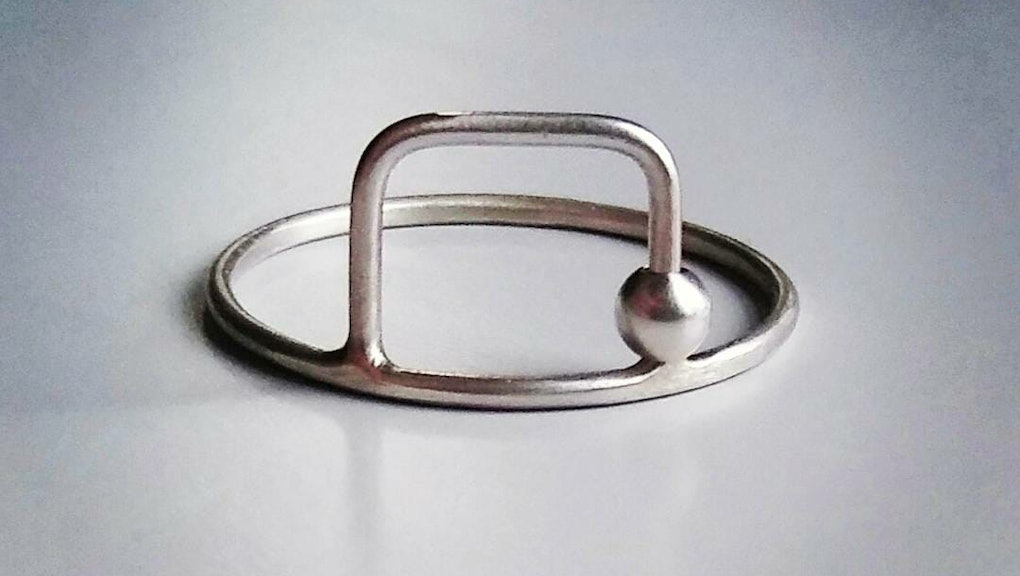 How jewelry can help someone with anxiety or ADHD

At first glance, the rings, bracelets and necklaces that are considered to be “fidget jewelry” look like any other. Usually simple, made of silver or gold or bronze, the jewelry serves a special purpose when you touch it — the wearer can spin and manipulate the beads, or move around the core of the ring over and over and over again.

Those kinds of pleasing and repetitive sensations alone have helped Lisa Capannelli — who makes her own fidget jewelry for her Etsy store, Renascent Studios — with her own anxiety and panic attacks.

“A sense of calm,” Capannelli said in an interview, describing how the jewelry makes her feel. “A sense of focus. A sense of distraction too. I need to do something with my hands. When you’re talking to somebody, for me, anxiety-wise, it helps to have my mind think about the jewelry and moving the beads rather than other invasive thoughts.”

But how can moving beads around your wrist, or continuously revolving a ring or beads on a ring actually be mentally beneficial? As Forbes reported on the benefits of fidgeting and fidget tools like these in 2017, there are “theories but limited concrete scientific evidence” as to why this helps. One of those theories is the act of fidgeting occupies parts of your brain that would otherwise be full of distracting thoughts. In other words, it helps you focus.

That’s why people with attention deficit hyperactivity disorder could reap the benefits of this kind of fidget jewelry. In a 2014 report on productivity and fidget widgets (like jewelry, or the once-popular fidget spinner), Polytechnic Institute of New York University’s Michael Karlesky and Katherine Isbister found that for hyperactive children and those with ADHD, “researchers have hypothesized that fidgeting is a coping mechanism the body employs to promote natural stimulant release, enabling the mind to focus on tasks. Anecdotally, encouraging fidgeting in the classroom ... seems to improve focus in children.”

As far as dealing with stress and anxiety, there’s the theory that fidgeting could additionally help prevent distracting thoughts that are obsessive, unhealthy and yes, anxiety-inducing, according to Forbes.

When Mic spoke to Capannelli on the phone, she admitted that she was spinning the beads on her ring throughout the entire interview. “Right now, I’m playing with my fidget ring and it gives me a sense of focus, but also a distraction for my body as an outlet,” Capannelli said.

Another group of people for which this kind of jewelry could be beneficial are people living with autism. Cynthia Kim found that out herself when she launched her online store Stimtastic in 2014, which sells tools to help people who stim, which is the word for the repeat physical actions common among people with autism.

“As an autistic person, I’ve been a lifelong stimmer and one of my main ways of stimming is tactile,” Kim said in an email. “If I’m not typing or actively doing something with my hands, I am likely stimming with something, especially if I’m out in public and trying to manage a lot of sensory input.”

Jewelry proved to be an ideal tool for Kim to use because it is so discreet.

“Having an item that I can wear means that I always have a discreet means of stimming close at hand,” Kim said. “I can’t realistically bust out a Rubik’s cube in a professional setting or at a nice restaurant, but I can usually put my hands in my lap and covertly turn a spinner ring. That little bit of stimming helps me stay focused on the people I’m with and cope with whatever sensory overload I might be experiencing.”

“Quiet stimming with a piece of jewelry creates enough of a ‘slow leak’ to prevent that from becoming a distraction,” Kim explained further. “Having a discreet item to fidget (stim) with allows us to have a natural coping mechanism available while also ‘blending in’ a bit more. Many people especially find the blending in aspect helpful or even necessary at work or in other professional settings.”

With all of these benefits in mind, fidget jewelry has become an industry of its own. In addition to Renascent Studios on Etsy, there’s the Etsy store LoveDawne, which is run by Dawne McGregor. When she launched LoveDawne in 2016, McGregor was simply designing jewelry that she thought was cool with movable beads, but then, after being tagged in a BuzzFeed listicle for jewelry that would help you calm down, her sales skyrocketed.

“I got 300 orders in just a few days,” McGregor said in an interview.

Clearly there was a demand. On Etsy, there are more than 4,000 items tagged as “fidget jewelry” alone.

Now, it’s probably pretty obvious to you as to why this jewelry is rising in popularity now. The world is not so calm and soothing. America is, understandably, in the midst of an anxiety epidemic.

If something as small and simple as a $20 ring could help soothe your mind and get it off the news, then so be it.