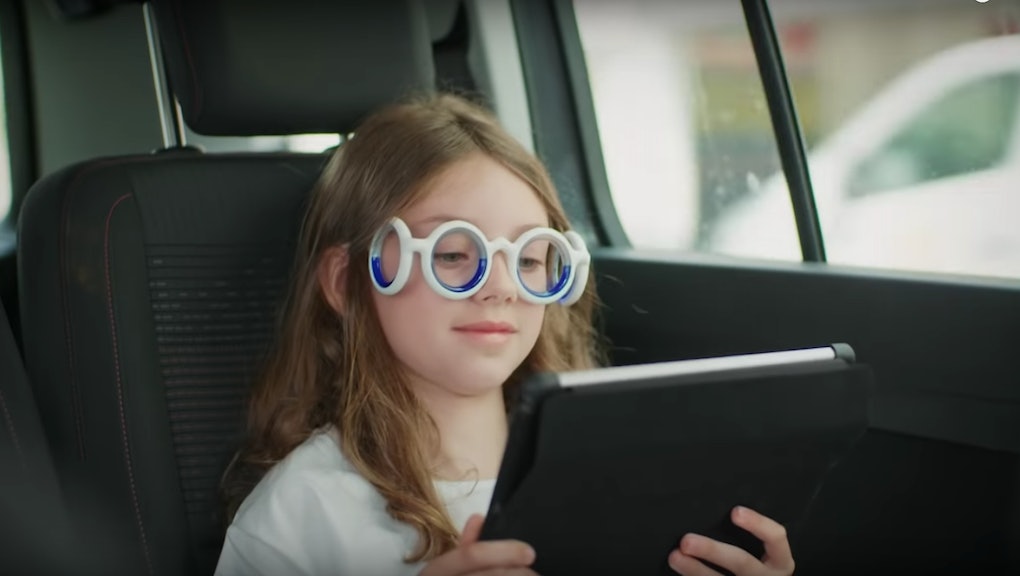 These new liquid-filled glasses are meant to cure motion sickness

The agonizing, productivity-killing phenomenon of motion sickness now has an easy, pill-free solution — or at least that’s what a French car company is claiming.

Citroën, the 99-year-old automobile manufacturer, is pitching a pair of liquid-filled glasses called “Seetroën” to the estimated one in three people who are susceptible to motion sickness. And though the glasses look like something out of a science fiction novel, one might be able to overlook their four-holed oceanic realness if it means skipping the urge to vomit during long-haul travel.

Motion sickness still isn’t well-understood in the scientific community, but Citroën engineers claim the glasses will end motion sickness after wearing them for about 10 minutes. That’s because the splashing and sloshing of the liquid inside the lenses supposedly allows the brain to match what a person’s eyes are seeing with what their inner ears are feeling.

There are several theories on what causes motion sickness, but many scientists believe that it’s caused by contradictory information detected by the brain while moving. So when we read Mic articles while in the car, for example, our eyes are likely telling us that we’re stationary while our inner ears sense that our bodies are in motion.

The glasses work in about 95% of cases, a promotional video for the product says, but it will set its consumers back 99 euros (about $116).

It’s certainly a fashion risk. Some might still opt for the more covert antihistamines, ginger pills or pressured wristbands.