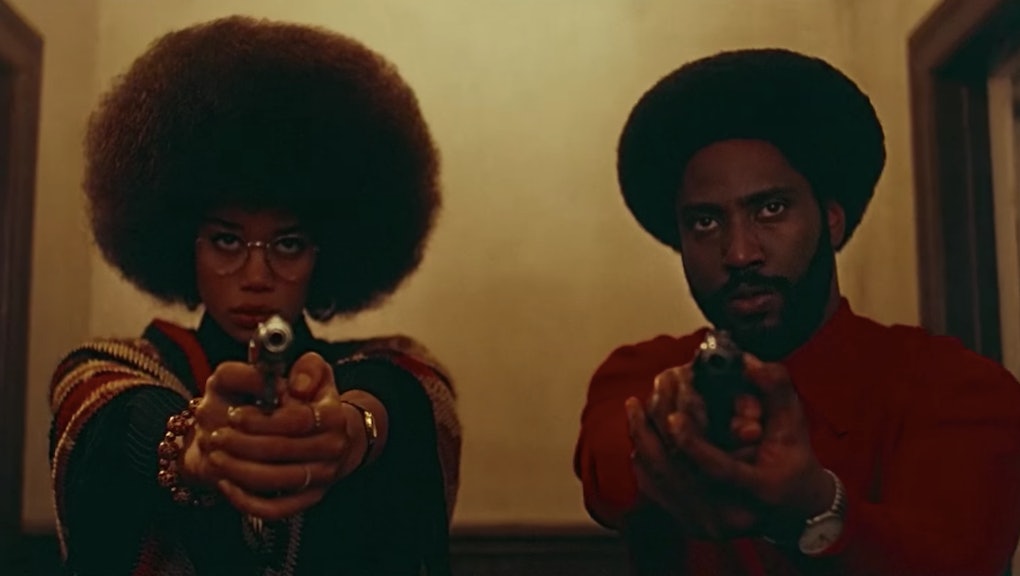 (Editor’s note: Spoilers for BlacKkKlansman ahead.)

Spike Lee waits until the very end of BlacKkKlansman to bust out his signature shot. The film’s plot, based on a true story — a black police officer in 1970s Colorado Springs, Colorado, infiltrates the local chapter of the Ku Klux Klan — is essentially resolved. Protagonist Ron Stallworth (John David Washington, son of Lee collaborator Denzel Washington) has, with the help of a select few other officers, thwarted a bombing plot cooked up by members of the Klan and saved the life of his would-be love interest, Patrice (Laura Harrier), who’s the president of the Colorado State Black Student Union.

In the film’s final minutes, Ron and Patrice are at his apartment when suddenly there’s a knock at the door. The Klan has Ron’s real name and address, and he’s just made a fool of the grand wizard himself, David Duke (Topher Grace), so it’s understandable that they each ready themselves with a handgun before Ron answers the door. It’s a relief, actually, that they’re prepared for what might be on the other side. And then it comes: Lee’s iconic double-dolly shot.

It’s a technique and visual that the 61-year-old director has returned to throughout his decadeslong filmography. The camera moves while on a dolly, and the performer follows, while also on a dolly; what the audience sees is the character drifting past their surroundings, as if they’re floating off the ground, in a surreal state. We’ve seen Denzel’s Malcolm X this way, in 1992’s Malcolm X; his slick Detective Frazier, from 2006’s Inside Man; John Leguizamo’s Vinny from 1999’s Summer of Sam; and Anna Paquin’s Mary from 2002’s 25th Hour, to name just a handful.

Now the younger Washington’s Ron Stallworth and Harrier’s Patrice belong to that lineage. Once they open the door to Ron’s apartment, we don’t see anyone there. Instead, we get a shot of the two of them, guns drawn, moving down the hallway of Ron’s building. They look like they’ve just jumped off the poster for a classic blaxploitation flick — a genre the merits of which they disagree about, earlier in the film. (Ron appreciates Shaft and Coffy, but Patrice isn’t a fan.)

The sequence went over well with audiences at the 2018 Cannes Film Festival, where Lee’s latest feature earned a standing ovation and rave reviews. “This is the first time that people ever applauded my signature double-dolly shot,” Lee told Vulture during Cannes. “These are people who love cinema and know my films. They were waiting for it, and when they saw it, they applauded.”

Exciting as that shot may be for cinephiles, the film doesn’t stop there. When we spot what Ron and Patrice are drifting toward, that’s when the finale of BlacKkKlansman becomes something more than stylish homage. That’s when it becomes something visceral and deeply upsetting.

Once the camera cuts from Ron and Patrice, it looks through a window at the end of the hallway, and we see a large wooden cross burning in the distance. From there, Lee brings us up close to the scene, where Klan members, in full get-up, throw torches at the symbol they’ve just set aflame. And anyone who’s read up on BlacKkKlansman knows what comes next.

Lee closes the movie with a montage of footage from the 2017 white supremacist rally in Charlottesville, Virginia. Suddenly, the story of a black officer outsmarting and humiliating dim-witted Klan flunkies transitions to images of a real-life mob of bigots — angry, hateful white men carrying torches, marching in unison and screaming, “blood and soil!” The audience gets a clear view of the car that struck counterprotesters and killed 32-year-old Heather Heyer. There are testimonials from people on the scene, screaming and crying and clearly in disbelief about what’s just happened. And interspersed are clips of President Donald Trump’s disastrous press conference following the tragedy, in which he effectively placed white supremacists and their counterprotesters on the same moral ground.

“Right away, I knew this had to be the coda for the film,” Lee said during his own press conference, at Cannes in May. “We have a guy in the White House — I’m not gonna say his fucking name — who defined that moment not just for Americans but the world, and that motherfucker was given the chance to say we are about love, not hate. And that motherfucker did not denounce the motherfucking Klan, the alt-right and those Nazis motherfuckers.”

Even before its final moments, BlacKkKlansman isn’t shy about drawing a direct line from David Duke and the KKK of the ‘70s to Trump’s presidential campaign and administration. One character explicitly says that part of the reason Duke presents himself as a professional spokesperson in a proper suit — and not as some slur-spewing maniac in a hood — is likely so he can run for office someday, or put a presentable face on the KKK and then install someone in the White House. Later in the film, Grace’s Duke actually leads a toast and chant of “America first.”

Those references might be too on-the-nose for some, but there’s no denying the power of that Charlottesville montage at the end. In fact, it might very well be too strong for some people. That footage of the car plowing through a crowd of people will always be horrifying. Seeing people’s tears and hearing their cries in the immediate aftermath of that attack will always be stomach-turning. But those are exactly the feelings that the ending is supposed to provoke. The entire sequence sends a clear and unmistakeable message: BlacKkKlansman is not a period piece; it’s a rebuke of today’s America, too.

Appending that real-life tragedy onto your narrative film isn’t a subtle move, but these aren’t subtle times. White supremacists gather in open spaces, and don’t bother hiding beneath hoods. David Duke openly endorses the president of the United States, and the president needs a few days before he denounces the cosign. That’s all part of the reason why, when Ron and Patrice answer that door, we don’t see anyone in specific on the other side. The threat isn’t any single person or even any organization, and it never has been. It’s in the atmosphere, and Ron and Patrice are simply moving through it.