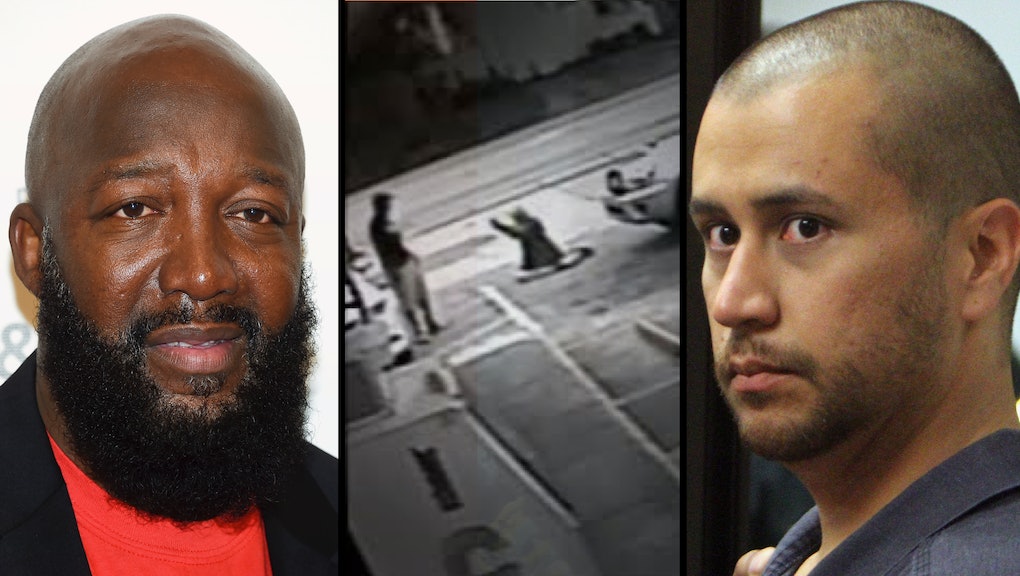 The July 2013 acquittal of George Zimmerman in the shooting death of Trayvon Martin led to more than just the birth of the Black Lives Matter movement, according to Trayvon’s father, Tracy Martin.

“What that acquittal did was empower white supremacists to feel as though they can go out and shoot and kill unarmed black men and say that they were afraid for their lives and get away with it,” Martin said Sunday during a Q&A session at the Apollo Theater in Harlem, New York City, following a preview screening of the new docuseries Rest In Power: The Trayvon Martin Story.

One of those alleged white supremacists, according to Martin, is Michael Drejka, a white man from Clearwater, Florida, who fatally shot Markeis McGlockton, a black man, less than two weeks ago. Drejka was allegedly heard having a disagreement with McGlockton’s girlfriend, Brittany Jacobs, around 3:30 p.m. July 19 after Jacobs and McGlockton pulled up to a local Circle A convenience store and parked in a handicapped space.

Drejka was reportedly upset about the illegal use of the handicapped space, according to Pinellas County Sheriff Bob Gualtieri, who detailed the incident during a 29-minute press conference July 20. After searching the outside of Jacobs’ car for handicap decals, Drejka, 48, began arguing with Jacobs in the parking lot while McGlockton and his 5-year-old son, Markeis Jr., were shopping inside the store.

A witness came inside and told the store clerk about the argument. McGlockton overheard the discussion, which compelled him to go outside, Gualtieri said.

Drejka had a history of making racist comments and engaging in angry arguments over the store’s handicap space, according to the store’s owner, Ali Salous, and septic tank truck driver Richard Kelly. (Kelly got into an argument with Drejka for the same reason a couple months before Drejka’s fatal encounter with McGlockton.)

“He’s always hanging out in the parking lot here,” Salous, the owner, told WFLA July 20. “If he sees anyone parking illegal or something like that, he just wants to argue with them and fight with them.”

Kelly said Drejka called him “the n-word” and threatened to kill him during their argument several weeks prior.

“He flipped out on me, called me every n-word, said he’s going to shoot me,” Kelly told Spectrum News 9 of Drejka on July 24. “He said he was going to kill me, and he went back to his truck, got something out of his truck and walked back up on me.”

After witnessing the July 19 shouting match between Drejka and Jacobs, McGlockton walked up to Drejka and shoved him to the ground, prompting Drejka to pull out a concealed handgun — which authorities said he was licensed to carry — and point it at McGlockton. Surveillance video shows McGlockton stepped away from Drejka before Drejka shot McGlockton in the chest.

McGlockton covered the bullet wound with his hand as he retreated back into the convenience store, where he collapsed in front of his son. He was declared dead at a local hospital less than an hour later.

The next day, Gualtieri told reporters that McGlockton pushed Drejka with “great force” during their altercation, and that his department could be sued if it arrests Drejka because of Florida’s Stand Your Ground law — the same self defense legislation that initially dissuaded officers in Sanford, Florida, from arresting George Zimmerman after he shot and killed Trayvon Martin on Feb. 26, 2012.

“We’re precluded from making an arrest in this type of a situation,” Gualtieri said during a July 20 press conference. “We gotta follow the law.”

The sheriff noted that Florida lawmakers changed the framework for Stand Your Ground in June 2017. According to the sheriff, the law used to require the defendant to prove they were entitled to its self-defense immunity.

“The law now is that the state attorney has the burden of proof by clear and convincing evidence that the defendant, the shooter, is not entitled to Stand Your Ground,” Gualtieri said. “Nowhere else is there anything like this in criminal law where somebody asserts something and the burden then shifts to the other person.

“The law has changed dramatically because you’ve got a situation here where Stand Your Ground allows for a subjective belief by the person that they are in harm’s way, they’re in fear,” the sheriff added.

On Monday, a chorus of legislative dissenters denounced Gualtieri’s interpretation of the state’s current Stand Your Ground statute.

“Nothing in either the 2005 law or the 2017 law prohibits a sheriff from making an arrest in a case where a person claims self-defense if there is probable cause that the use of force was unlawful,” NRA lobbyist Marion Hammer, architect of the state’s original Stand Your Ground law, told Politico of Gualtieri and the McGlockton shooting.

At issue is a subsection of the law that states a law enforcement agency may not arrest a person who invokes Stand Your Ground “unless it determines that there is probable cause that the force that was used or threatened was unlawful.” Hammer said the sheriff’s office won’t be civilly liable if it arrests Drejka as Gualtieri contends.

“Nothing in the law says a person can sue the sheriff for making an arrest when there is probable cause,” she said.

“‘Stand your ground’ uses a reasonable-person standard,” Baxley told Politico. “It’s not that you were just afraid. It’s an objective standard.”

Republican State Sen. Rob Bradley also challenged Gualtieri’s claim that Stand Your Ground is based on the subjective perception of the shooter. Bradley sponsored 2017 legislation that says authorities must show “clear and convincing evidence” of grounds to prosecute a Stand Your Ground defendant.

“An individual using a gun in self-defense in Florida must have an objective, reasonable fear of imminent death or serious bodily harm,” Bradley said. “This idea that Florida law is concerned about the subjective perceptions of a shooter is wrong.”

State Rep. Bobby Payne (R-Fla.) said Gualtieri’s invocation of Stand Your Ground in the Drejka shooting was “weak, based on the victim’s retreat or de-escalation of the event once he saw the gun.”

“[There was] no additional [reasonable] fear of great bodily harm or imminent death,” Payne told Politico. “More investigation is needed and will likely take place. Pursuing the case should be the decision of the state attorney once received.”

Such ambiguity over Stand Your Ground similarly delayed the arrest of Zimmerman in 2012. A 2013 study showed the law’s application from 2005?2010 was racially biased against African Americans, according to study author John Roman.

“What we know is that there’s racial bias in the application of the law. In situations in general, not to any specific statute,” Roman told Mic over the phone on Monday. “In cases where there’s a black victim and a white shooter/murderer, it’s almost 10 times more likely to be found justified than if the situation is reversed.”

According to Roman, the premise for implementing Stand Your Ground was erroneous to be begin with. “The only logical reason for their to be a Stand Your Ground law was because people were being convicted of crimes in homicides when they were acting in self defense,” he said. “Before these laws were put in place, there’s not evidence that occurred with any frequency or even at all.”

In April, Jenner Furst, one of the executive producers of the Trayvon Martin docuseries, called Stand Your Ground “the most disgusting law and the most reprehensible piece of legislation that one could possibly imagine.”

On Sunday, Furst said repealing Stand Your Ground should be a litmus test question all aspiring elected officials must answer in Florida’s gubernatorial and state legislative races.

“You have a lot of people voted into office that are not doing their jobs,” Furst said. “We have to form the conversations now. That’s what it’s going to take to get this law repealed.”

Tracy Martin said Drejka might have thought twice about shooting McGlockton in such a brazen manner if Florida officials had convicted his son Trayvon’s killer back in 2013.

Rest in Power: The Trayvon Martin Story premieres Tuesday night at 10 p.m. Eastern on BET and the Paramount Network.