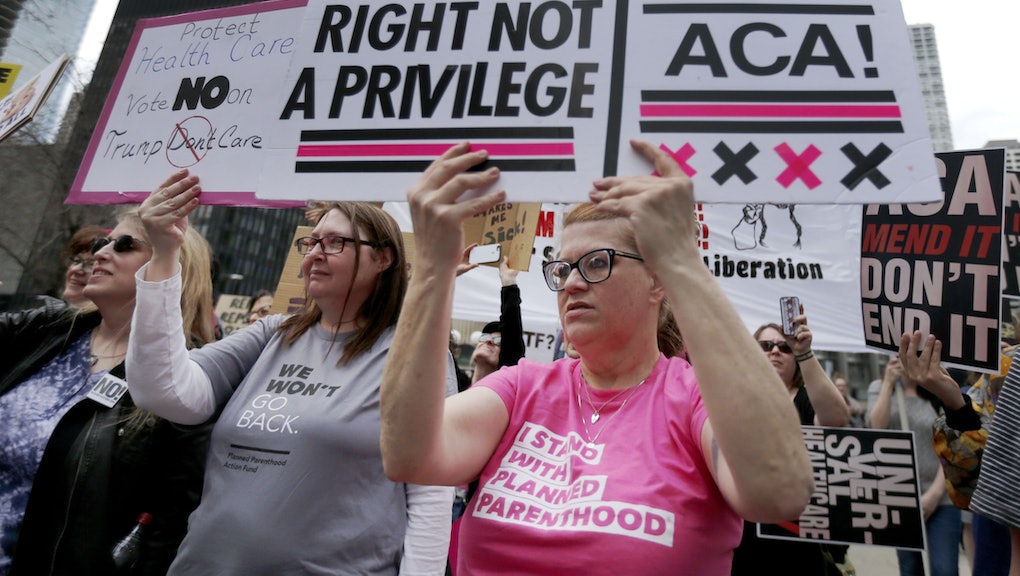 President Donald Trump has made taking down the Affordable Care Act, a signature piece of legislation under the Obama administration, a key part of his presidential agenda ever since his days on the campaign trail. Now, a new lawsuit alleges his attempts to do so violate the U.S. Constitution.

On Thursday, the cities of Baltimore, Chicago, Cincinnati and Columbus, Ohio — along with two individuals using ACA insurance in Charlottesville, Virginia — filed suit against Trump and other government officials and departments. The lawsuit argues the administration is “waging a relentless campaign” against the legislation and “deliberately trying to make the Act fail” in violation of the Administrative Procedure Act and the “Take Care Clause” of Article II of the U.S. Constitution.

“I worked hard to help President Obama expand access to affordable health care for millions of Americans, and I will not sit idly by while the Trump administration raises the cost of care and rolls back access to life-saving coverage,” Chicago Mayor Rahm Emanuel, Obama’s former White House chief of staff, said in a statement. “President Trump is attempting to sabotage the Affordable Care Act out of pure spite. It is not just immoral, it is illegal, and the city of Chicago looks forward to defending our residents’ rights to access affordable care in court.”

As the lawsuit details, Trump has been clear throughout both his candidacy and presidency about his distaste for the ACA and his desire to see the health care policy “explode.” He’s spoken out against the policy on Twitter, at rallies and in other public appearances.

“All Americans are, quite literally, paying the price”

In addition to speaking out against the law, the Trump administration has also taken steps to weaken the ACA in the absence of congressional action on health care. The lawsuit cites Trump’s executive orders on health care and his administration’s under-enforcing of the ACA’s individual mandate, refusal to grant state waiver requests, efforts to decrease enrollment, refusal to defend the ACA in court and its weakening of public confidence in the ACA as actions that have “purposefully undermined” the ACA.

“Having campaigned on a promise to secure the ACA’s repeal but having failed to convince Congress to take that step, President Trump has turned to executive action alone to try to sabotage the law,” the lawsuit reads.

The suit also states the ACA is “designed to expand coverage in the individual health insurance market” but that the administration is using regulation, executive orders and other means to obstruct market access, purposefully attempting to destabilize it, and working to increase insurance premiums and decrease enrollment.

The lawsuit further singles out the Centers for Medicare and Medicaid Services’ Notice of Benefit and Payment Parameters for 2019, which establishes rules critics say will increase health care premiums and impose barriers to enrollment. The lawsuit alleges the 2019 rule violates the Administrative Procedure Act, which allows a reviewing court to “hold unlawful and set aside agency action ... found to be ... arbitrary, capricious, an abuse of discretion or otherwise not in accordance with law.”

Overall, the lawsuit claims the Trump administration’s attacks on the ACA have succeeded in weakening the legislation — and, as it notes, “All Americans are, quite literally, paying the price.”

According to Congressional Budget Office data cited by the lawsuit, the administration’s ACA attacks, combined with other factors, resulted in a 37% increase in the average premium for a benchmark ACA plan from 2017 to 2018. Analysis by the Kaiser Family Foundation predicted the Trump administration’s non-enforcement of the individual mandate penalty and other policies make it likely insurers will increase premiums in 2019.

These increases wouldn’t be likely if not for the Trump administration’s efforts. A Brookings Institute report released in August predicted that in a “stable policy environment,” the average per-month ACA premium would actually decrease by 4.3% in 2019.

“Continuing actions on the part of the administration to systematically undermine the market ... make it almost impossible to carry out the mission,” Chet Burrell, former CEO of CareFirst Blue Cross Blue Shield, told the Washington Post in May.

“We’ve got to take care of individuals,” Baltimore Mayor Catherine Pugh said. “We don’t turn people away from our hospitals, we try to take care of them. This is a cost the city cannot afford to bear.” Pugh also said she expects more cities to join the suit.

Increasing health care costs hurts both individuals and families, as the lawsuit notes that “every additional dollar that, owing to defendants’ actions, an individual must spend to acquire health insurance constitutes financial harm.”

Through its steps to sabotage the ACA — which, despite the Trump administration’s efforts, still remains the law of the land — the lawsuit alleges Trump and his administration are violating Article II of the Constitution, which stipulates the president “shall take care that the laws be faithfully executed.”

“Just as courts ‘cannot interpret federal statutes to negate their own stated purposes’ ... the president cannot ‘implement’ a federal statute in ways designed to destroy it,” the lawsuit argues, claiming this is what the administration does in wielding executive authority designed to sabotage the ACA. “Defendants are not acting in good faith; instead, they have usurped Congress’ lawmaking function and [are] violating the Constitution,” the suit states.

This isn’t the first time the Take Care Clause has been cited when arguing against a presidential action. During former President Barack Obama’s tenure, the clause was invoked regarding Obama’s actions on immigration, the Defense of Marriage Act and even the ACA itself.

The clause has seemingly never been successfully used against a president, according to Vox. However, given Trump’s blatant attacks clearly aimed at sabotaging the ACA, the case could prove to be a historic first, Yale University law professor and Article II expert Abbe Gluck told NBC News.

“That’s what makes this case novel, first of its kind and really important,” Gluck said. “No scholar or court has ever said the president can use his discretion to implement a statute to purposely destroy it.

“If there’s ever going to be a violation of the ‘Take Care’ Clause, this is it,” Gluck added.