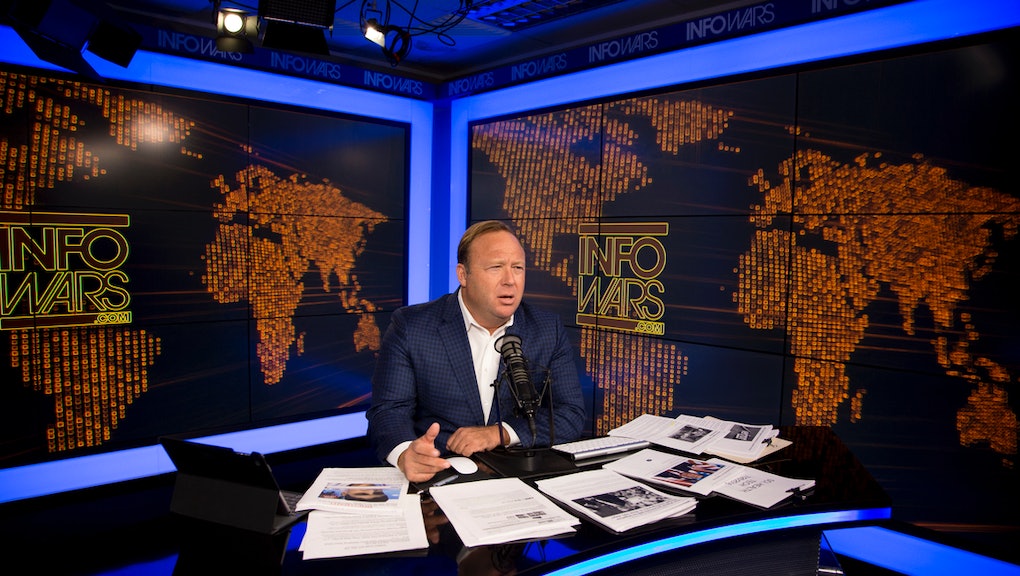 Alex Jones’ Infowars courted even more controversy this week after some social media platforms kicked him off amid accusations of spreading fake news and alleged hate speech. But it’s not just conservative alternative news sites that these far-reaching platforms and outlets have shunned.

Several popular left-leaning and progressive content creators on Facebook have either been booted from the site with no clear explanation as to why, or have seen their traffic take a nose dive after being erroneously flagged as fake news. Now, some are reluctantly speaking out against Jones’ being censored in the spirit of the first amendment.

“I feel like this is going to lead to a very slippery slope, and a dangerous path for freedom of speech and information exchange in general,” alternative news site founder Jason Bassler told Mic. “It’s not a beneficial thing in society for any type of censorship of free speech, regardless of how outlandish or crazy.”

Bassler is the co-founder of the Free Thought Project and Police the Police. The latter is a police brutality watchdog news page launched in 2012 that creates and shares stories and memes critical of corrupt and abusive officers.

Police the Police often features graphically violent, raw video footage and images of officers killing or injuring civilians. Facebook has blurred or obscured many of these posts.

PTP gets its money from donations and selling ads and merchandise like t-shirts.

The growing success of PTP in 2012 compelled Bassler to launch his Free Thought Project in 2013. FTP shines light on not only police brutality, but also more general government transparency and accountability. Combined, these two pages have more than 5 million followers, yet traffic on both pages has tanked in 2018, according to Bassler, in part due to changes in Facebook’s search and newsfeed algorithms. Those changes were designed to limit the proliferation of native Facebook news sites and alleged fake news.

“In 2017, Police The Police was reaching 12-15 million people a week on average,” Bassler said. “Now we’re lucky if we’re pulling in more than 4 million a week. We’ve actually had to fire our writing staff. Now we only have a bare boned crew.”

The rise and fall of Facebook reliant news platforms was already vexing to media companies large and small. But since CEO Mark Zuckerberg’s vow to crack down on misinformation after he was summoned to Capitol Hill, PTP has also received three “false news” rulings from the platform. Those rulings were based on story reviews conducted by third-party fact checkers, like Politifact, a service owned by the Poynter Institute, which Facebook uses to verify news stories. Bassler disputed Politifact’s fake news claims and received email confirmation from the site admitting they got it wrong.

Unfortunately, the damage had already been done.

Mic reached out to Facebook for comment on this story, and will update it if the company responds.

“It takes a long time to build a fan page up to 5 million fans,” Bassler said. “Facebook throttling our page ensures our posts reach less than 1% of that.”

FTP and PTP have lost more than $50,000 in ad revenue since the beginning of the year, according to Bassler, who says Facebook’s fake news designations are to blame. Now he’s considering taking legal action against the social media tech titan for fraudulently labeling his posts as fake news, which he said has all but killed his business.

Bassler says that mainstream media outlets have given progressives and the public at large the false impression that censorship on social media is a partisan issue.

“I don’t think it just hurts conservatives,” Bassler said. “The left is cheering this on, when historically the left is usually the side cheering for free speech.”

Several creators who describe their content as left-leaning or non-political don’t frame the social media censorship used against them and Jones as progressives versus conservatives. They see it more as establishment vs. anti-establishment — Capitol Hill insiders in both the Democratic and Republican parties aligning with mainstream media outlets to compel social media tech giants to crush alternative news sites, which they perceive as a threat.

“Should Facebook and Google decide what’s true and false?” William Harader, administrator for a previously penalized Facebook page called Galactic Free Press said to Mic via Facebook Messenger. “What should bother people is the fact that Facebook, Google and Apple all banned [Alex Jones] within 24 hours of each other. What happens to smaller sites when Facebook and Google decide to penalize or block them? Those two companies have enormous control over the internet, far more than most countries.”

These pages and their posts aren’t Russian bots, or right-wing provocateurs like Jones, according to Collectively Conscious founder Jake Passi, whose page was affected by the purge.

“The idea that it’s only far-right conservatives getting restricted and banned by these social media giants just isn’t true,” Passi said via Facebook Messenger.

The 30-year-old Chicago native, who lives and works in Thailand, said his recently deleted alternative news page specialized in what he calls “hive mind brainstorming” — a process of posting topical questions as status updates for commenters to discuss and debate. Those questions, at times, covered controversial health and science issues like, “What’s the leading cause of global warming?” or, “What’s the number one factor that causes autism?”

“We basically tried to determine what the best, most important questions of the day are that people need to be asking themselves, and asking publicly,” Passi said. “I would post like four or five questions per day. I would archive them all on our website. We asked 2,400 different questions over several years.”

Collectively Conscious attracted more than 915,000 followers before Facebook deleted the page without warning in June.

The page’s status updates included links to news stories hosted on Passi’s third-party site, which sells native ads and earned between $2,000 and $4,000 a month in 2017, according to Passi.

In March, Collectively Conscious received a seven-day link ban from Facebook that prevented its administrators from posting links to third-party sites. The website claimed this penalty was incurred for previously posting links to content that violates Facebook’s terms of service, according to Passi.

Appealing the ruling took several days, Passi said, and throughout the process, the restrictions on his page seriously damaged his business.

“Facebook has no customer service for regular people, only for people who spend a lot of money on ads,” Passi said. “They told one of my friends who has access to [Facebook’s ad customer service team] that the link ban was a mistake. They said it was due to false positives triggering one of their automated systems, and they removed the restriction.”

After the link ban was removed, however, Passi said his page lost 90% of its reach for all posts, not just the ones with links.

“Everything went down 90% from what it used to be,” he said. “I couldn’t figure out what the fuck was going on. It looked like my page was shadow banned. The only views we were getting were from people visiting the page. We contacted ad support again, asked what was happening. They said they couldn’t figure out what was going on, that it’s probably a bug and it’ll get resolved eventually.”

It took seven weeks before the “bug” disappeared on May 10, according to Passi, who said he lost about 80% of his monthly income by then.

On June 13, Facebook completely deleted Passi’s Collectively Conscious Facebook page before sending him an obscure message that failed to explain why a major part of his livelihood, which he’d spent years building, had been destroyed.

“Your page has been deleted for causing people to like or engage with it unintentionally in a misleading way,” read an email provided to Mic that was originally sent to Passi and several other Facebook news page administrators, according to those Mic spoke with via Facebook Messenger. “Our page terms state that: ‘Pages must not contain false, misleading, fraudulent, or deceptive claims or content.’ All pages must comply with the Facebook Page Guidelines. ... This decision is final, I apologize for the inconvenience.”

Bassler says progressives calling for Jones to be banned are being short-sighted. The same subjective censorship standards could easily be used against anyone who publishes content that the social media companies think could turn off advertisers or upset regulators in Washington, he says.

“I don’t want to overlook the fact that Alex Jones is very much a shock jock, very much into sensationalism,” Bassler said. “Tabloid magazines have existed for decades. Should they be expelled from society?