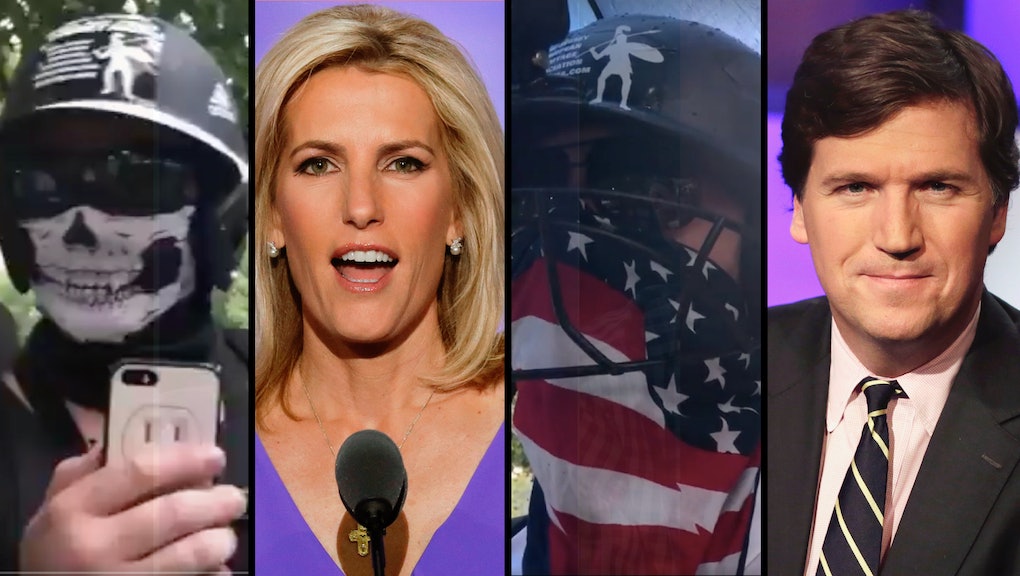 WASHINGTON, D.C. — The underwhelming turnout at Sunday’s “Unite the Right 2” rally on Capitol Hill led some to suggest there was little left to fear from an apparently dwindling alt-right movement.

“Only 30 bozos showed up for this stupid Nazi rally,” Weekly Standard writer John Noonan tweeted Sunday. “I’ve yet to hear a good reason for why this tiny squad of losers deserved millions worth of wall-to-wall media coverage, which amplified their message.”

But the rally participants’ own words revealed a more alarming dynamic at play. Many of their once-fringe views — that white Americans have become a marginalized sub-group in their own country, and that non-white immigration is threatening their survival, to name two — have become far more mainstream since organizer Jason Kessler’s original “Unite the Right” rally in Charlottesville, Virginia, in August 2017.

One year since that deadly demonstration, some of these views are being trumpeted by pundits on Fox News, America’s most-watched basic cable network across a 24-hour day.

“Massive demographic changes have been foisted upon the American people, and they’re changes that none of us ever voted for and most of us don’t like,” Fox News host Laura Ingraham told her estimated 2.7 million viewers Wednesday. “Much of this is related to both illegal and in some cases legal immigration that, of course, progressives love.”

In a since-deleted tweet, former Ku Klux Klan grand wizard David Duke called Ingraham’s rant “one of the most important (truthful) monologues in the history of” the mainstream media, Business Insider reported. Ingraham later disavowed the support she had received from white nationalists, though she didn’t reference Duke by name.

Increased crossover of alt-right talking points and mainstream conservative views is a result of white nationalists’ bigger plan to unite white conservatives through shared fears about the future, alt-right leaders and participants in Sunday’s rally said.

“As a collective, we believe our rights are being violated,” one alt-right rally-goer who declined to give his name said in an interview. “We need to unite everyone from our right-wing ideologies, put some of our differences aside and come together for what’s best for our interests as right-wing ideologues.”

The movement’s new strategy relies less on mobilizing people for demonstrations than on shifting the so-called “Overton window” — “so what was once forbidden becomes fringe and what was once fringe becomes mainstream,” as it’s been described by Vice News Tonight reporter Elle Reeve.

In theory, this would make conservative white Americans gradually more accepting of alt-right ideology — and the plan is already coming to fruition. Original “Unite the Right” participants — like Peter Cvjetanovic, Peter Brimelow and Nicholas Fuentes, as well as Patrick Casey of Identity Evropa — attended the Conservative Political Action Committee conference in February. Other “Unite the Right” marchers, like James Allsup, have joined the record-breaking number of white nationalists running for elected office as Republicans.

“I’m looking at the upcoming elections and I’m saying to myself, ‘It’s a good thing for us to stay out of the spotlight,’” Nazi leader Chris Cantwell told VICE News in a video report that aired Friday. “I seek for better controlled people who sympathize with me to influence the Republican Party.”

“I seek for better controlled people who sympathize with me to influence the Republican Party.” — Nazi leader Chris Cantwell

Many alt-right demonstrators Sunday articulated their concerns by taking aim at real-world examples of what they see as declining white influence. Several mentioned Sarah Jeong, the Asian-American New York Times journalist who recently sent pro-Trump Twitter users into a frenzy after some of her old anti-white tweets resurfaced.

Jeong has since became a favorite target of Fox News host Tucker Carlson.

“People say, ‘Oh! She’s a racist! and the response from the left has been, ‘You can’t be racist to white people, period,’” Carlson said Aug. 4 during his self-titled show. “She’s attacking the race of my children, OK? My kids are white ... Does that mean that I can go attack all Asians in response, as she did?”

“White people have a long history of being in charge in this country,” Ethan Bearman, Carlson’s guest on the segment, replied. “It’s really hard to say that you’re an oppressed minority.”

“Oh, so only she gets to be the racist,” Carlson said.

“If that was Sarah Jeong saying that about blacks, how would you feel?” asked one of the demonstrators, who declined to give his name. “White people are under attack on the media and everybody’s acting like it’s OK.”

A second NJEHA rally-goer who identified himself using the name “14,” a possible reference to the white supremacist 14 words slogan, said, “Every white country, they’re bringing in non-white immigration. This is not a coincidence. So everybody else can have a homeland, but we can’t have our homelands?

“I’m an American,” he continued. “My founding fathers, they thought about [white people] when they built this. I don’t think they had everybody in mind.”

When asked whether America has always been a country of immigrants, 14 replied, “Yeah, white immigrants. People can stick feathers in their ass, but that don’t make them a chicken.”

Little information is readily available about the NJEHA. The group’s website prompts users to download flyers with anti-Semitic propaganda and contains links to YouTube videos created by the National Policy Institute, a white nationalist think tank led by AltRight.com co-founder and editor Richard Spencer. NJEHA’s flyers were spotted in Princeton, New Jersey, back in March.

The Southern Poverty Law Center reportedly hadn’t heard of the group until Sunday.

“We do not have any information on them,” SPLC spokeswoman Rebecca Sturtevant said in an email.

NJEHA’s demonstrators protected their identities Sunday using bandana masks and dark sunglasses, illustrating one of the biggest lessons the alt-right has learned over the past year: the importance of discretion. Despite the skyrocketing rate of hate crimes and a rise in overt racism the U.S. continues to experience under President Donald Trump, publicly declaring oneself a white supremacist remains a societal taboo in most of the country.

The tiki-torch-wielding men and women who attended the first “Unite the Right” rally in Charlottesville — where one counterprotester was killed and several more injured by white supremacist James Alex Fields, Jr. — seemingly had few qualms about showing their faces in public as they shouted Nazi slogans like, “Jews will not replace us!” and “Blood and soil!”

The boldness was short-lived. Many participants were promptly doxxed by journalists or anti-fascist activists and had their lives temporarily upended as a result. Rally-goer Andrew Dodson lost his job and reportedly died by suicide after he was doxxed on social media. Dodson was just one of several alleged white nationalists who were fired or disowned by family members after being identified as participants. By contrast, several of the 10 to 20 protesters who attended the “Unite the Right 2” rally kept their faces hidden.

Still, the impact of their movement has been significant, perhaps most notably on conservative media and policy. Fox News’ audience was 92% white in 2014, the most homogenous cable news network by a wide margin. The views expressed there have trended further to the right as the years have gone by.

“Clearly there’s been an impact in the public discussion in this country,” Oren Segal, director of the Anti-Defamation League’s Center on Extremism, said in an interview Monday. “Was it the public discussion, the divisive rhetoric in President Trump’s campaign that helped give a boost to the alt-right? Or is the alt-right sort of making inroads in the mainstream? What came first? It’s difficult to say.

“But when we start seeing some of the themes in the underbelly of the internet being shared on Reddit and 4chan, when these things are starting to appear more regularly in our mainstream media, it’s a problem,” Segal added. “And the white supremacists are definitely celebrating it.”

Some in the alt-right had the same takeaways from Sunday’s rally as Segal.

“The media are relishing the relatively small numbers that turned out in support of Jason Kessler’s ‘Unite the Right’ rally in Washington, D.C., as if it indicated the demise of the alt-right,” AltRight.com writer Christopher Jon Bjerknes wrote in an article posted Monday. “It does not.”

For Bjerknes and others, the real barometer for the movement’s resiliency will be November’s midterm elections and ongoing support for Trump’s agenda.

“The alt-right movement is more apt to manifest itself in rising resentment that will show itself in the polls come Election Day,” Bjerknes wrote. “A far better indicator of the mindset of Americans is the success of Donald Trump and his rallies, despite all of his many shortcomings.”