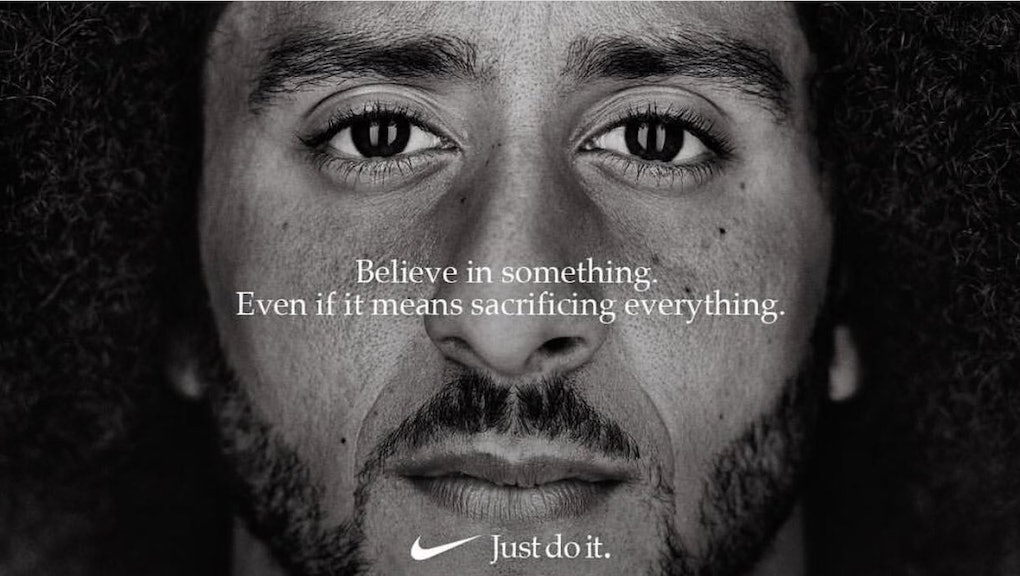 Halloween is less than two months away, but already the tale of Colin Kaepernick is a ghost story that won’t stop haunting the NFL — and for good reason.

On Monday, Nike launched its 30th anniversary “Just Do It” ad campaign featuring the unsigned former San Francisco 49ers quarterback, even though he hasn’t played a down of professional football in almost two years.

The apparel industry leader’s first commercial featuring Kap is set to air on TV during the Thursday Night Football kickoff of the NFL regular season. It was released online a day early Wednesday, one of many planned promotions involving the former Niners star.

Kaepernick’s presence will be felt throughout the fall in other ways as well.

His lawsuit against the NFL for allegedly colluding to prevent him from being signed to a new team survived summary judgment in August. The “#TakeAKnee” movement he launched to protest police brutality in 2016 has been kept alive by other NFL players in various iterations, including Kenny Stills, Albert Wilson, Malcolm Jenkins, Marshawn Lynch and Michael Bennett.

Children of all races across the country have continued to kneel in solidarity with Kap during their schools’ national anthem performances and Pledge of Allegiance recitals, drawing scorn from coaches, teachers and fans who oppose them. It’s all been enough to make a Trump-supporting anthem fetishist’s head spin while burning a pair of their already-purchased, outdated Nike shoes.

The president himself condemned Nike’s Kaepernick endorsement Tuesday, but investors have been cautiously optimistic about the company’s gamble on the divisive player. Nike’s stock plummeted three percent soon after the Kaepernick news broke, but has rebounded and leveled out since then despite President Donald Trump’s Twitter claims to the contrary.

In a broader sense, decades of precedent show both Nike and Kaepernick are on the right side of history. Other once-despised athlete-activists have gone on to become bankable stars and cultural heroes with fortunes that have lasted years after their deaths — largely because they rebelled against the social and political norms of their times in the name of noble causes.

There are notable exceptions, of course. Mahmoud Abdul-Rauff basically lost his career after his NBA anthem protest and has been largely forgotten since. But Kaepernick’s profile has only continued to rise since his NFL banishment, due largely to the culture war he’s come to embody between the White House, socially conscious athletes and their respective camps of supporters.

That conflict has come to define the Trump era as much as anything — and will be remembered accordingly by history.

Much like Nike this week, Coca-Cola rattled political figures and the Jim Crow South in 1964 when its CEO threatened to move the company’s headquarters out of Atlanta unless city officials honored Martin Luther King Jr. for winning a Nobel Peace Prize that year.

(King famously called for a Coke boycott just four years later. And like Nike, Coca-Cola has its own sordid history of discrimination and abuse.)

The Chicago Cubs voted to boycott the Brooklyn Dodgers after team owner Branch Rickey signed Jackie Robinson, the league’s first black player, in 1947. Many Americans remember them now as prisoners of a bygone era, who, like Kaepernick haters today, struggled to envision a future world that would look back on them in shame.

In the autobiography he wrote 20 years after his MLB debut, Robinson famously recalled his first World Series game as a Dodger, explaining why the experience made it so that he could no longer stand for the national anthem.

“There I was the black grandson of a slave, the son of a black sharecropper, part of a historic occasion,” Robinson wrote. “It should have been a glorious moment for me as the stirring words of the national anthem poured from the stands. Perhaps it was, but then again perhaps the anthem could be called the theme song for a drama called The Noble Experiment. Today as I look back on that opening game of my first world series, I must tell you that it was Mr. Rickey’s drama, and that I was only a principal actor. As I write this 20 years later, I cannot stand and sing the anthem. I cannot salute the flag; I know that I am a black man in a white world.”

Eleven years before Robinson broke the color barrier, many Americans rejoiced when a black man named Jesse Owens ruined Adolf Hitler’s plan to showcase the athletic prowess of his Aryan “master race” by winning four gold medals at the 1936 Olympic games in the fascist dictator’s capital city of Berlin.

The führer infamously didn’t congratulate Owens and his fellow black medalists after their track and field triumphs, but when asked about the snub, Owens aimed his frustration closer to home.

“Hitler didn’t snub me; it was our president who snubbed me,” he said of beloved progressive icon Franklin D. Roosevelt, who invited some of Owens’ white teammates to the White House but declined the same honor to Owens and his black Olympic counterparts. “The president didn’t even send a telegram.”

There were elections that year, after all, and Roosevelt “did not want to be perceived as being soft on the Negro issue,” sociologist Harry Edwards told Ozy in 2016.

It should be noted that for most of his adult life Owens, like the young Michael Jordan, willfully declined to use sporting events to stage protests. In 1968, he even tried to stop sprinters Tommie Smith and John Carlos from using their Mexico City medal-winning Olympic stage to make a political statement.

The duo’s black power display took place six months after Martin Luther King Jr. was assassinated, which led to protests, riots, and months of elevated racial tension throughout the country. Smith and Carlos — who today are revered by many as civil rights icons — initially had their medals stripped from them for having the gall to raise their gloved black fists in solidarity with the plight of their fellow black Americans.

In a statement condemning the act of protest, the U.S. Olympic Committee called Smith and Carlos’ gesture a “discourtesy.”

“[The] two men involved are suspended forthwith from the team and ordered to remove themselves from the Olympic Village,” the committee wrote, according to the New York Times.

“I realized now that militancy in the best sense of the word was the only answer where the black man concerned, that any black man who wasn’t militant in 1970 was either blind or a coward,” Owens wrote in his 1972 book, I Have Changed.

The “changed” Owens’ views were shared by the once-maligned boxer Muhammad Ali, the man Kaepernick is often compared to. (Detractors, like black journalist Jason Whitlock, take issue with this comparison because Kaepernick, in his view, is less vocal about the cause he champions.)

Ali’s Muslim faith, his friendships with perceived radicals like Malcolm X and his refusal to enlist in the U.S. Army during the Vietnam War draft in 1967 made him an ungrateful, unpatriotic villain for conservative white America — just like Kaepernick.

For decades, younger American sports fans have relived these moments in drab technicolor or on grainy black and white news reels. The modern-day parallels are clear. Ali’s statement sounds a lot like what Kaepernick told reporters in his locker room in August 2016, after he was first spotted sitting on the bench during the 49ers pre-game national anthem performance.

“Ultimately it’s to bring awareness and make people realize what’s really going on in this country,” Kaepernick said, explaining his protest. “There are a lot of things that are going on that are unjust, people aren’t being held accountable for. That’s something that needs to change.

“This country stands for freedom, liberty, justice for all, and it’s not happening for all right now,” Kaepernick continued. “When there’s significant change and I feel like that flag represents what it’s supposed to represent and this country is representing people like it’s supposed to, then I’ll stand.”

Kap later started taking a knee at the suggestion of NFL veteran and former U.S. Army Green Beret Nate Boyer, who told Kaepernick taking a knee was a better way to show respect for the troops.

Trump, Whitlock and Fox News pundit Jesse Watters have since tried their best to pettifog that reality and undermine Kaepernick’s clearly stated goals as well as the support he’s received for sacrificing much of his pro football career. But the headwinds of history show he’s well on his way to being remembered as a visionary rather than a villain.

Fifty years from now, those who despise him appear destined to join the ranks of the jeering, hissing, rogues of America’s dark past whose opposition to the civil rights advancements of black and brown people serves as a case study in hate for most of us today. Many of us recoil in disgust and bewilderment witnessing the mental gymnastics conservative, predominantly white Americans perform to find some perverted moral comfort in their repugnant, thinly-veiled bigotry, past and present.

Athletic competition has always been central to how Americans mythologize themselves, as a nation where your actions, your talent, and how hard you work matters more than where you’re from or what you look like. The competitive world of American sports has always been a microcosm of America life that has given generation after generation its own symbolic moral fitness test. Today a large chunk of the nation, including leaders in the NFL, is failing that test miserably once again.

Kaepernick may remain despised by many now, but so too were Robinson, Smith, Carlos and Ali in their time. Now all four are revered historical icons. What was true generations ago remains evident today. Ali’s net worth alone was estimated between $50 million to $80 million in the years leading up to his death in 2016.

Why wouldn’t Nike want a piece of that legacy? Why doesn’t the NFL?