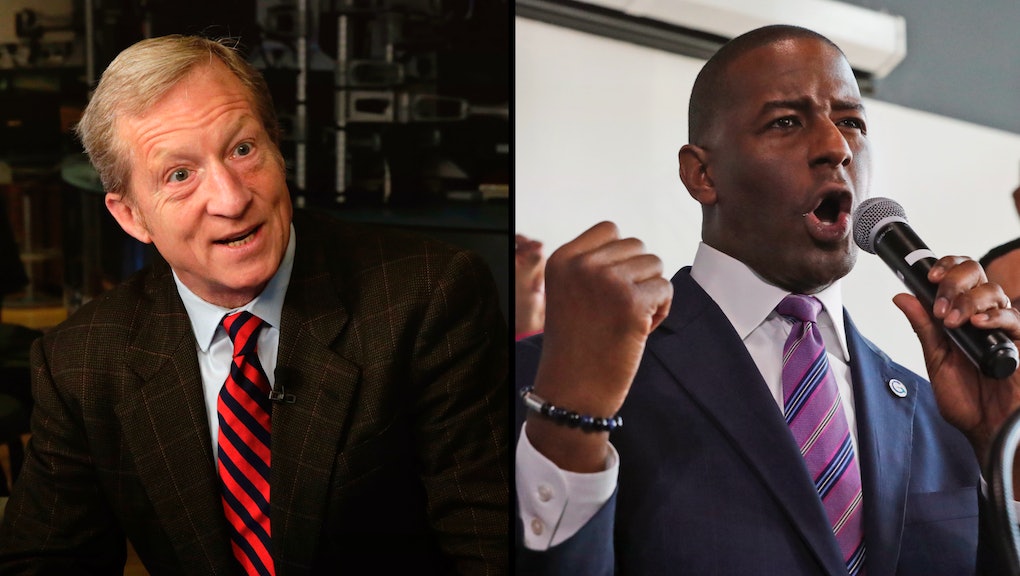 Billionaire Democratic mega-donor Tom Steyer announced on Tuesday that he plans to infuse another $5.2 million into Andrew Gillum’s campaign to become the next governor of Florida, bringing Steyer’s total contributions up to $6.6 million.

Back in August, Steyer told the New Yorker that he planned to spend $30 million on boosting progressive candidates ahead of the 2018 midterm elections, with Gillum seemingly a personal favorite among them. When asked which candidate he believes best represents the profound generational shift currently remaking the Democratic party, Steyer didn’t hesitate before mentioning the former Tallahassee mayor’s name.

Gillum, who is poised to become the first-ever African-American governor of Florida if he wins on Nov. 6, defied expectations when he surged to the top of a crowded Democratic heap during the state’s primary elections in August — with the help of sizable cash infusions from Steyer and fellow billionaire donor, George Soros.

“At the beginning, he told me he had a rule around trying to stay out of primaries,” Gillum told the New Yorker of Steyer’s reluctance to get involved in a race so early on. “As I talked to him about what I believed, I told him, straight up, ‘In your brand of politics, you are never going to have anyone come out of these primaries who shares that belief system if you don’t get involved.’ ”

In an interview with the New York Times, Steyer said that Gillum champions a vision of progressivism that closely mirrors his own.

“He’s a fierce gun-control person, he’s been a climate champion,” Steyer said. “He’s called for the impeachment of the president. He’s been willing to talk plainly to Florida voters, and they’ve responded.”

When it comes to how the cash infusion will be spent, Steyer said it will primarily be employed to help mobilize young and minority voters. On the decision not to court “undecided” or independent voters, the billionaire countered that he doesn’t “even accept this idea ... of voters in the middle.”

While voters of color tend to have low turnout rates when it comes to voting in midterm elections, the racial tenor of the race between Gillum and his opponent, Trump-backed Republican Ron DeSantis, could potentially have an impact on those statistics come November: DeSantis went viral after he told voters not to “monkey this up” by voting for Gillum, a black man, and has been ensnared in several other racial controversies in the weeks since.

But Gillum isn’t the only progressive cause Steyer is throwing his money behind — according to the Washington Post, the billionaire has pledged to contribute to 60 carefully selected and competitive congressional races in the hopes of flipping control of the House in the Democrats’ favor come November.

The money all seems intended to accomplish one goal, which is Steyer’s stated desire to bring impeachment articles against President Donald Trump at some future date. On Tuesday, Steyer told the Post that if Supreme Court nominee Brett Kavanaugh is confirmed and Trump lives up to speculation and fires Deputy Attorney General Rod Rosenstein, he plans to ramp up spending on key Senate races as well — including competitive contests in Arizona, Tennessee, Nevada, Indiana and Texas, as well as Gillum’s race in Florida.

A meeting between Trump and Rosenstein is scheduled to take place in the White House on Thursday.