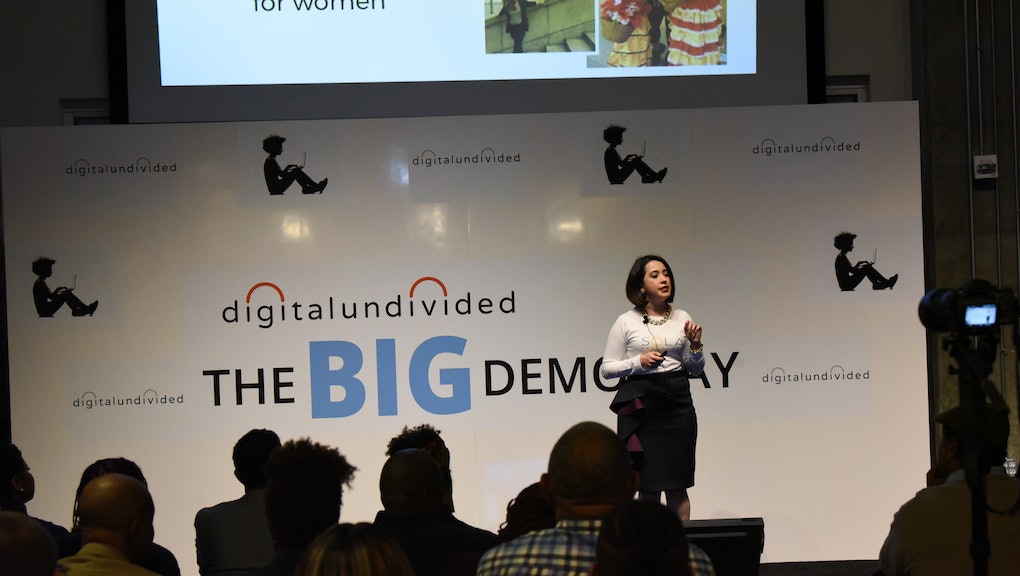 Report: Latinx women run less than 2% of all women-led startups. Here’s why.

In 2016, while traveling alone and abroad in Japan, Valeska Toro was sexually assaulted. The next day, she befriended a woman who became her support system after the traumatic experience. “I think after meeting her, it put me in a place where I wanted to provide that same level of support for other women who are traveling alone,” Toro said over the phone Tuesday.

This moment led her to create Sola Travelers, an online community connecting female solo travelers and providing them with travel guides. Presently, Sola Travelers has 3,000 users and counting.

But it was Toro’s participation in the 2017 Digitalundivided incubator, a nine-month program for black and Latinx women-led startups, that gave her the resources, tools and support to pursue entrepreneurship. This community is helping dismantle barriers black and Latinx women face to becoming entrepreneurs. Currently, Latinx women are 17% of the U.S. women’s population but less than 2% of women-led startups are led by Latinx women, according to Digitalundivided’s “State of Latinx Women Founders” report, released Friday.

“Digitalundivided provided such a great structure,” said Toro, who was also the lead researcher for the report. “I’ve learned from them the need to understand who your customer is. We talked to over 1,000 women and that’s what helped us create the company that we have today. It wasn’t until I was actually in the process and had this great community to support me, that I was able to do it.”

The latest report about Latinx founders is a follow-up to a study Digitalundivided released in June focusing on the state of black women’s startups, said Kathyrn Finney, the founder of Digitalundivided.

“There hasn’t been a lot of data and hasn’t been much attention on Latinx women,” Finney said over the phone on Wednesday. “If you were to Google ‘Latinx women startups,’ you actually wouldn’t find that much information, which is really surprising considering the size of the population that is Latinx in the U.S.”

The Digitalundivided Latinx report is filling this information gap by outlining key findings on funding, educational background, the geographical location of Latinx women-led startups and suggestions for improving the pipelines for supporting Latinx founders.

For instance, 58 Latinx women have raised over $1 million in venture funding. But Latinx women-led startups raised just .4% of the more than $400 billion in venture capital that all startups received since 2009, the research states. One way to help Latinx women raise more money is by creating more pipelines that provide them mentorship by other founders, business leaders and community leaders, in addition to access to networks that can fund their businesses, the report states.

Latinx women founders are also well-educated. Eighty-eight percent had a bachelor’s degree and 49.5% had a master’s degree or PhD. And it’s worth mentioning that having a professional background in the tech industry is not necessary for Latinx women founders to be successful, the report stated. Of the 107 Latinx women led-startups counted by Digitalundivided, 40% of the founders had worked for a tech company.

One difficulty that may impact some Latinx founders is how their parents may view entrepreneurship, Finney explained. “Many family members that happen to come to this country, happen to be entrepreneurs in order to be able to make money to feed their families,” Finney said. “So entrepreneurship wasn’t always necessarily a choice, it was, you have to do this, because of racism, because of language barriers, among other things.”

“Some parents discourage their kids from becoming entrepreneurs because they don’t want them to have the hard life they had to have.”

Toro said she had a similar experience when she started her company. Her mother immigrated from Costa Rica to the U.S. and started her own client-based housekeeping business 20 years ago. Although her mother’s hustle served as a model, her mother’s perspective on entrepreneurship isn’t exactly an endorsement of the American dream.

“When I did go to my parents and I told them that I would pursue this full-time, they were very hesitant because the American dream for them wasn’t necessarily entrepreneurship,” Toro said. “I think for them the American dream was stability, benefits and a 401(k).”

The report also found that the majority of Latinx women-led startups — over 60% — are located in California or New York. The cities with the highest count include New York City, San Francisco, Los Angeles, Santa Monica and Miami.

In future reports, Finney wants to go beyond geography and dig further into the diversity of the Latinx community and how colorism and someone’s nationality may play a factor in how much support they receive.

“If you were Cuban is it easier for you to raise money versus, say, if you’re Puerto Rican?” Finney said. “Those are things we want to look at in the future.”

Ultimately, Finney says this report is the baseline for further research that should be conducted on the needs of Latinx women founders and those interested in becoming entrepreneurs. “We hope in 2020 that we can say there is a 1,000% increase in Latinx women-led startups,” Finney said.

“I want us to showcase the data,” she said, “but at the same time celebrate the pioneers that have done the work and what they’ve been able to do.”