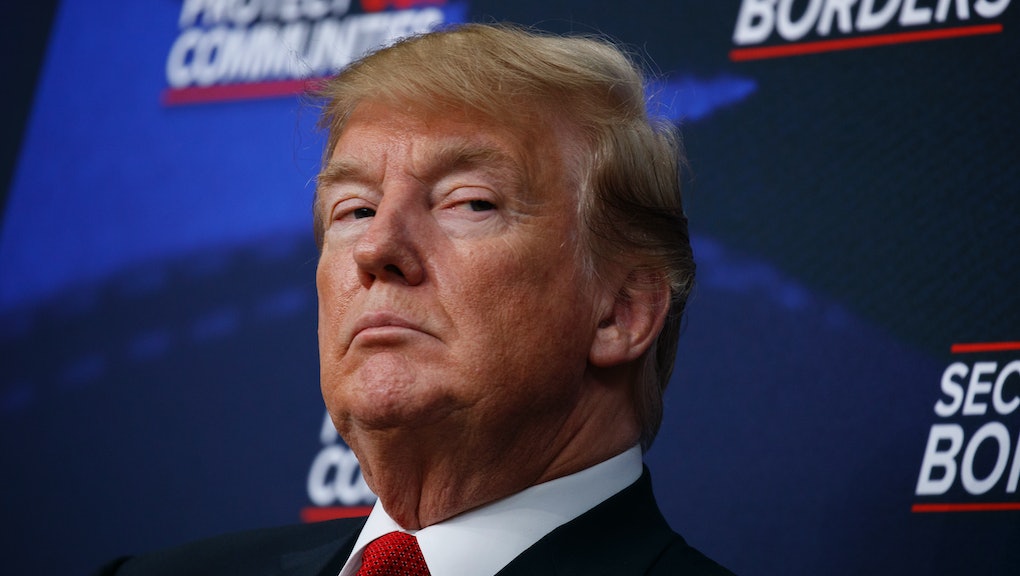 The unemployment rate for Latinos in the United States reached historic lows in 2017 and the group’s median household income rose notably as well during the same year.

Yet major segments of the nation’s Latino population feel their quality of life has deteriorated since Donald Trump took office and the president’s immigration politics are the main reason why.

Pew researchers released the findings from their latest Latino voter poll Thursday morning. The phone survey of 1,501 Hispanic adults was conducted between July 26 and Sept. 9 and found that 47% of American Latinos said their lives had worsened over the past year. That number is 15 percentage points higher now than it was in the immediate aftermath of Trump’s White House win, according to Pew. It’s also the highest level of Latino disenchantment since the Great Recession.

“This is all based off Latinos’ attitudes and their views,” lead author Mark Hugo Lopez, director of global migration and demography at the Pew Research Center, told Mic about the study over the phone Thursday. “Some of it doesn’t necessarily match official statistics.”

Two-thirds of Latinos said the president’s policies have been harmful to Hispanics and 38% of respondents said they’ve experienced some form of discrimination over the past year, Pew reported.

The study’s authors noted that 49% of Hispanic adults are foreign born individuals who tend to have stronger concerns about their place in society and worry more than U.S.-born Hispanics about immigration issues like Immigration and Customs Enforcement deportations. Researchers also found Hispanic immigrants tend to dislike Trump more than their U.S.-born peers, though Hispanics in general tend to have an unfavorable view of the president’s immigration policies.

“Seventy-one percent [of foreign born-Hispanics] say White House policies have been harmful to Hispanics as a group, compared with 63% of U.S.-born Hispanics who say the same,” the study authors wrote. “Foreign-born Hispanics are also more pronounced in their criticism of the Trump administration.”

The litany of Trump policy issues affecting Latino immigrants has also caused U.S.-born Hispanics to sour on the president, according to Latino immigration advocate Yatziri Tovar, of Make the Road New York. Tovar is 26 years old and is originally from Mexico; her parents brought her to the U.S. when she was just a baby.

It’s been more than a year since Trump canceled the Deferred Action for Childhood Arrivals program and left the lives of 800,000 undocumented immigrants like Tovar, who have all lived in the U.S. since they were children, in immigration purgatory.

“Donald Trump is the one that ended DACA, the one responsible for putting us in the limbo we are in now,” Tovar told Mic on Thursday. “Ever since then, not only me, but thousands of Latino youth have kind of been in limbo not knowing what’s going to happen next. Without having any progress in Congress there’s this whole question of what’s coming next.”

Under Trump, ICE agents also have arrested about 40,000 immigrants who did not have prior criminal records in the 2018 fiscal year, up from the estimated 24,000 arrests in fiscal year 2017, according to the Hill.

Trump’s attempt to end the temporary protective status of more than 400,000 U.S. immigrants, including those from the Latin American countries of Nicaragua and El Salvador, was temporarily blocked by a judge on Wednesday. Trump’s separation of Hispanic families crossing the nation’s southern border and have also damaged his reputation among Latinos, according to Pew.

It’s not just foreign-born Latinos who the president has affected though.

Many Americans from the U.S. territory of Puerto Rico and their loved ones living in the continental U.S. take issue with the Trump administration’s response to Hurricane Maria.

A Harvard study released in May found an estimated 4,600 Puerto Ricans died as a result of the devastating 2017 storm despite administration estimates of just 16 deaths. Recovery efforts led by the Federal Emergency Management Agency under Trump were incredibly slow.

Trump continued to downplay the devastating effects of Maria on the anniversary of the storm in September after images of him tossing rolls of paper towels to survivors and lambasting the mayor of San Juan drew negative headlines.

Tovar said Latino Americans from all walks of life who often disagree with each other on partisan issues, have been mostly united in their distaste for Trump.