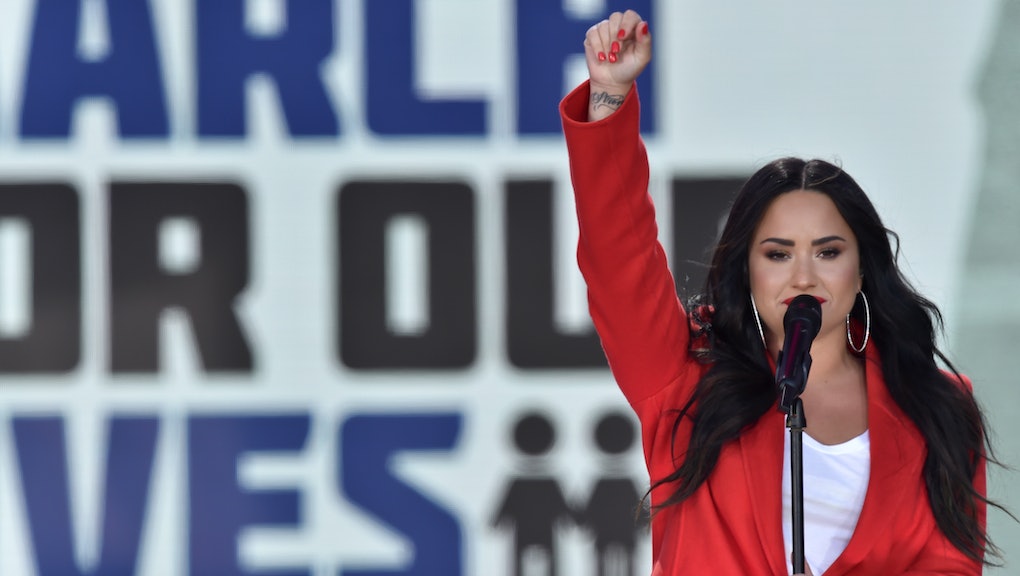 Singer Demi Lovato posted her first photo on Instagram since she was hospitalized for a reported overdose back in July — and it was a photo of her in the voting booth. “I am so grateful to be home in time to vote,” Lovato wrote in the caption. “One vote can make a difference, so make sure your voice is heard!”

According to Cosmopolitan, Lovato recently completed a stay in rehab, and Lovato’s mom recently said in an interview her daughter was 90 days sober. Congrats to Demi for her sobriety and for fulfilling her civic duty. You go girl!

Following poor ratings and Baldwin’s recent arrest in New York City — the actor allegedly punched someone in a dispute over a parking space — ABC downgraded The Alec Baldwin Show from its Sunday night slot, Vulture reported on Wednesday.

The network reportedly said on Tuesday night that Baldwin’s show will be replaced in its Sunday night time slot with Shark Tank reruns, and the remaining taped episodes of The Alec Baldwin Show will air on Saturday nights starting in December. Ouch.

Scamtrepreneur Billy McFarland, who was recently sentenced to six years in prison for his participation in the epically disastrous Fyre Festival, apologized in an interview with People on Tuesday. “I am incredibly sorry for my collective actions and will right the wrongs I have delivered to my family, friends, partners, associates and, you, the general public,” he told the magazine.

“I’ve always sought — and dreamed — to accomplish incredible things by pushing the envelope to deliver for a common good, but I made many wrong and immature decisions along the way and I caused agony. As a result, I’ve lived every day in prison with pain, and I will continue to do so until I am able to make up for some of this harm through work and actions that society finds respectable.”

McFarland pled guilty to multiple counts of fraud for his role in the failure of a music festival, which promised luxury, music and comfort and delivered none of those things. Maybe his apology will appease some of his victims. Maybe.

In a new interview with the Hollywood Reporter, actor Sarah Jessica Parker reflected on her most famous character, Sex and the City’s Carrie Bradshaw. Parker told the outlet Carrie would be “really energized” by the #MeToo movement. “It’s hard to imagine her not wanting to write about it, not wanting to talk about it and not having an opinion,” Parker said. “It would be rich territory for her to explore.”

Maybe seeing terrible men get taken down would help Carrie realize that all of her boyfriends were bad. That’s right, I said it — even Aidan.

Put this on your radar: A new season of The Great British Bake Off is coming to Netflix

Need to calm down after midterms? Netflix has the perfect solution. A new season of The Great British Bake Off (alternatively titled The Great British Baking Show) is coming to the streaming service on Friday, Nov. 9. This new season just aired in the U.K., and it’s turnaround from British TV to your Netflix queue is the fasted one yet, according to Delish. Which is good, because we need this now more than ever.