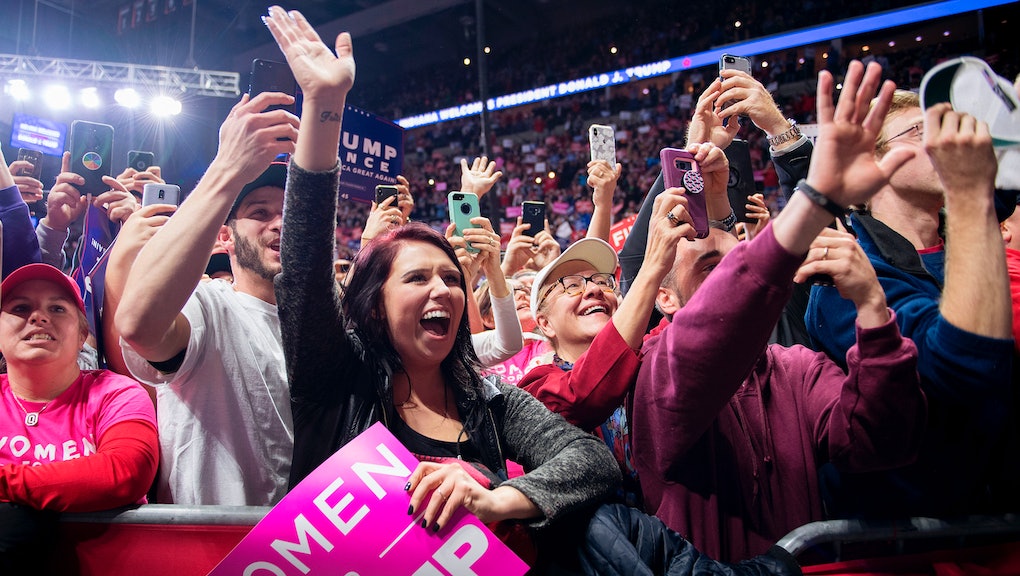 What Democrats continue to fail to understand about white women voters

As details rolled in Wednesday on how voting played out in the 2018 midterm elections, a reoccurring pattern once again emerged — Democrats remain obsessed with gaining support from white women, but that sought-after love affair remains mostly one-sided and unrequited.

CNN exit polling data shows Democratic candidates in key races in Texas, Florida, Georgia and elsewhere won overwhelming support from black, Hispanic and Asian-American women as well as men. But a majority of white women voted for Republican candidates in those same races. U.S. Sen. Ted Cruz (R-Texas) received 60% support from white women, compared to just 39% for his Democratic challenger Beto O’Rourke. Fifty-one percent of white women chose Ron DeSantis over Andrew Gillum in Florida’s gubernatorial race. This political reality has persisted through election cycle after cycle after cycle after cycle over the years, vexing both liberal feminists and Democrats along with their grassroots allies in the process.

Despite history repeating itself once more, on Wednesday Twitter was abuzz with shaming, disgust, confusion and speculation as to why white women continue to support candidates from a party so hellbent on overturning Roe v. Wade that it puts an accused attempted rapist like Brett Kavanaugh on the U.S. Supreme Court. That same party, of course, is led by President Donald Trump, who openly mocks alleged sexual assault victims and who has admitted to groping women without their prior consent.

The latter didn’t stop white women from voting for Trump over Hillary Clinton by a wide margin in 2016 — Trump won 53% of votes from white women nationwide compared to just 43% for Clinton, according to FiveThirtyEight. The same was true two and four years before that, when the war on women narrative twice championed by Democrats failed to convince a majority of white women voters to support Dems in the 2014 midterms or the 2012 race between Barack Obama and Mitt Romney.

“It’s frustrating and hard to accept,” Sonia Ossorio, president of the National Organization for Women New York, said during a Wednesday evening phone interview. “It is not unprecedented to not vote for your interests. It appears white women have been doing that for a long time.”

Since voting results came in Tuesday night, news headlines have seized on the fact that more white women voted Democrat in this election cycle than at any time in recent memory. But these analyses fail to underscore why that is the case, and how progressives can best capitalize on that momentum.

It’s true that women across all racial and ethnic categories tended to support Democrats over Republicans this year. However, that may not be as encouraging for progressives courting the white female vote as it sounds.

The 2018 midterms saw historic turnout among young people, a demographic that tends to prefer Democratic candidates to contenders from the GOP. An unusual surge in young women voters might explain why more white women supported Democrats in this election cycle than in previous years. Even with that surge, however, the Democratic Party broke even with the GOP among all white female voters, with 49% of white women supporting both parties, according to CNN exit polls.

Much of the confusion over how white women vote stems from where party lines are drawn on issues most important to feminists on the left, including abortion rights.

A majority of Americans support a woman’s right to choose. A 2016 Pew Research poll found that 70% of Americans are against overturning Roe v. Wade. A June Gallup poll found men and women support abortion rights at almost exactly the same rate.

However both male and female voters tend to place defending abortion rights low on their list of priorities. Another 2016 Pew study showed abortion placed 13th of 14 top issues for American voters regardless of sex. The economy, terrorism and foreign policy ranked first, second and third respectively among voters’ priorities, the study found.

What’s also clear is that more gender-specific issues like abortion rights and the wage gap alone don’t dissuade a majority of white women from voting Republican. When it comes to the wage gap, a recent study from the Center for American Women and Politics research group found gender equality ranked 10th out of 11 voting issues in terms of importance for both men and women.

“Using gender politics for many Republican women can actually backfire,” study author Melissa Deckman said via email on Wednesday. “There are lots of white women who are pro-life and find the GOP more appealing for that reason; or they are more generally socially conservative and oppose LGBT rights, or are concerned about religious liberty. Moreover, they are very much opposed to feminism more broadly, which they view as a philosophy opposed to men, so attempts to frame a campaign about gender equality aren’t going to work.”

The midterm election results show both white men and white women tend to vote Republican. Most men and women of color vote for Democrats. This has remained almost universally true since the end of the Civil Rights Movement.

In the 1970s, white voters were split 50-50 between the two parties, according to a May study conducted by political scientist Joshua Zingher.

That split has grown closer to 60-40 in favor of the Republican Party since 2000 as the demographics of the country have shifted, according to Zingher.

“Whites have slowly, but consistently moved away from the Democratic Party,” Zingher wrote in an article for the Washington Post. “These recent [2014 and 2016 election cycle] losses are on top of Democrats’ losses among Southern whites during the 1960s and 1970s after Democrats’ support of the Civil Rights Act of 1964 and the Voting Rights Act of 1965.”

No midterm race illustrates this fact better than the Georgia gubernatorial battle between Brian Kemp and Stacey Abrams, who was contending to be the state’s first female governor in addition to its first governor of color.

According to Slate, 83% of white women without a college degree voted for Kemp over Abrams while just 81% of white men with no degree did the same.

An aversion to so-called political correctness and radical feminism is also a deterrent for women of all backgrounds. A recent study from Refinery29 and CBS News found only half of millennial women identify as feminists, despite supporting women’s rights issues overall.

“As a woman, I do want us to be societally equal,” Leah, an independent voter who declined to give her last name, told Refinery29 in August. “I feel like the [feminist] movement has been largely taken over by far-left wing activists that make it nearly impossible for me to identify with.”

There may be other ways to win them over

Gender politics may not be the path to convincing more white women to vote for Democrats in 2020. But immigration issues may be.

Recent headlines show an increasing number of evangelical Christians are changing their minds about supporting Trump based on his policies toward refugees and asylum seekers.

In Texas, the demographic group leading this charge is white evangelical women, according to the New York Times.

“I care as much about babies at the border as I do about babies in the womb,” a pro-life evangelical Texan and Beto O’Rourke supporter named Tess Clarke recently told the New York Times after explaining she used to vote Republican based solely on her opposition to abortion.

“My hope would be that women in similar places as us would feel liberated from the expectation that you’re just doing the same thing you’ve always done, because it’s safe, because it’s what your pastor is telling you to do, or your husband,” Clarke added. “We have to own it.”

This narrative may be encouraging to some progressive strategists, but it may also be a bit misleading.