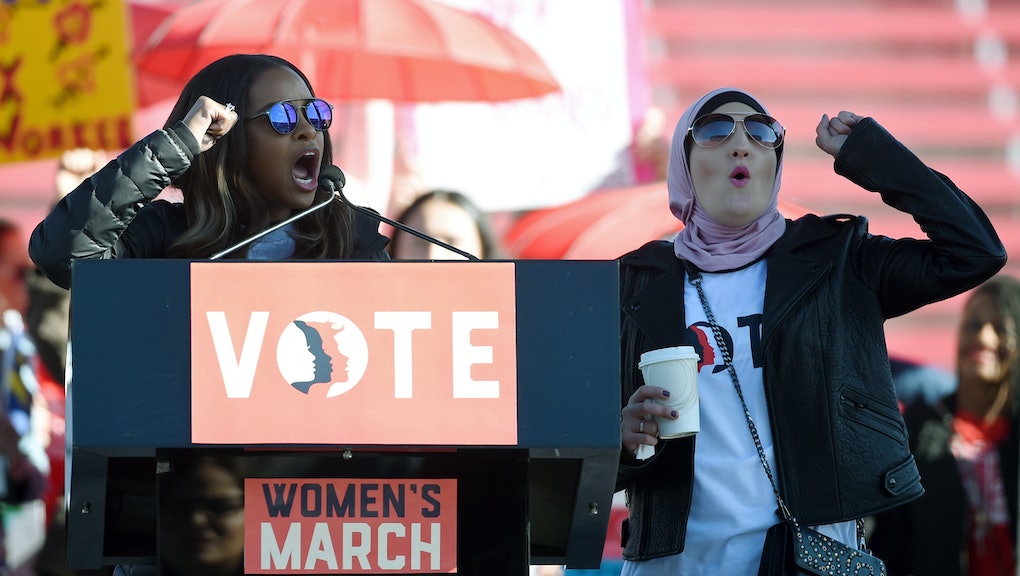 Women’s March board member Linda Sarsour said via text message Tuesday that she and fellow activist leaders of the movement are not stepping down and the third annual Women’s March will proceed as planned. The march’s founder Teresa Shook wrote a Facebook post Monday asking them to bow out as the organization’s luminaries.

“Bob Bland, Tamika Mallory, Linda Sarsour and Carmen Perez of Women’s March, Inc. have steered the Movement away from its true course,” Shook wrote. “I call for the current co-chairs to step down and to let others lead who can restore faith in the movement and its original intent.”

Shook’s denouncement of Mallory and Sarsour comes after controversy over Mallory’s alleged affiliation with Nation of Islam leader Louis Farrakhan, who recently made anti-Semitic remarks comparing Jewish people to “termites.” Sarsour also has been called anti-Semitic for her support for the boycott, divestment and sanction of Israel due to the country’s human rights abuses against Palestinians.

“The most important thing to know is that Teresa Shook never reached out to us directly,” Sarsour said Tuesday. “We are an imperfect yet powerful, effective movement and we have a commitment to continue this work because marginalized communities are counting on us.”

Sarsour and Mallory have repudiated Farrakhan’s comments about Jews, saying on Nov. 8 that the Women’s March “reject[s] anti-Semitism in all its forms.”

“We recognize the danger of hate rhetoric by public figures,” Women’s March posted on Facebook. “We want to say emphatically that we do not support or endorse statements made by Minister Louis Farrakhan about women, Jewish and LGBTQ communities.”

Mallory first took heat after it was revealed she sat in the audience during a Saviours’ Day speech in February, in which Farrakhan said, “The powerful Jews are my enemy.”

In a lengthy March 7 News One essay, Mallory explained in detail that the Nation of Islam has played an integral role in advancing the black community in the past and that she herself often works with people she doesn’t agree with.

“I was raised in activism and believe that as historically oppressed people, blacks, Jews, Muslims and all people must stand together to fight racism, anti-Semitism and Islamophobia,” Mallory wrote. “I believe that LGBTQAI people are not an abomination or a creation of man, but simply people, and that religion is not to be used as a tool to abuse, divide, harm, bully or intimidate. ... It is impossible for me to agree with every statement or share every viewpoint of the many people who I have worked with or will work with in the future.”

These statements haven’t stopped conservative critics and some Women’s March supporters, including actress Alyssa Milano, from saying Mallory and Sarsour need to sever ties with Farrakhan altogether, something Mallory has been unwilling to do.

Milano recently said she wouldn’t speak at the third Women’s March slated for Jan. 19, if Mallory and Sarsour were still part of it.

“Any time that there is any bigotry or anti-Semitism in that respect, it needs to be called out and addressed,” Milano told the Advocate in October. “I’m disappointed in the leadership of the Women’s March that they haven’t done it adequately. ... Unfortunate that none of them have come forward against him at this point. Or even given a really good reason why to support them.”

Sarsour referred back to a statement the Women’s March posted on its Facebook page on Nov. 8 when asked why she thinks she and Mallory are being criticized for alleged anti-Semitism.

“It’s important to remember that many on the right are thrilled to use any tool they can find to divide and undermine our movement — one that inspired the #WomensWave we saw this week in the midterm elections,” she said.