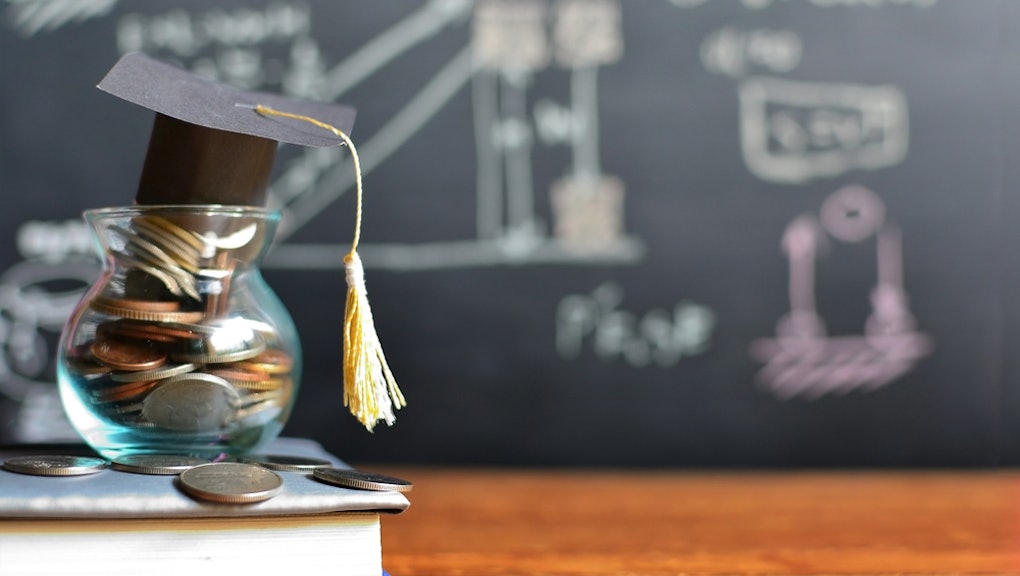 Student loan debt in the U.S. is no joke. As of 2018, 44 million borrowers owed an estimated $1.5 trillion. And for students just starting to navigate the task of paying for college, figuring out the types of loans they can take out and how much they can borrow can be complicated enough, before even thinking about what their repayment process will look like down the road. But, it’s important to plan for that as early as possible, especially considering the financial burden of student loan interest. Thanks to that, what you end up owing could be far more than what you initially borrowed. Here’s why — and how you can minimize the expense.

Not all student loan interest is created equal

All student loans come with interest, but the rate of that interest and how much you have to pay depends on the type of loan you take out. “Borrowers with subsidized federal student loans don’t have to pay the interest that accrues while they’re in school, during their grace period [the first six months after leaving school] and during periods of deferment,” said Teddy Nykiel, a student loans expert for NerdWallet. “Federal loan deferment is a way to temporarily pause payments during periods of poverty, unemployment [or] active military duty.” If you have an unsubsidized federal loan or private loan — the latter of which is issued by a bank, credit union or other lender — you’re responsible for paying the interest that accrues during all of those periods.

The federal student loan interest rate is set by Congress each year, is the same for everyone and is fixed throughout the life of your loan. That said, if Congress changes the rate from one year to the next, you could potentially pay a different interest rate for each school year you take out a loan. “For instance, an undergraduate that took out an unsubsidized loan for the 2017-18 school year has a 4.45 percent rate for that loan,” Nykiel explained. “If they take out another loan in 2018-19, the rate will be 5.05 percent because federal student loan rates increased this academic year. But the student will repay the first loan at 4.45% and the second loan at 5.05% because rates are fixed.”

Private loans are a different story, though. The interest rates are set by lenders, based on your credit and financial history. “Different borrowers get different private student loan rates but generally, the better you or your co-signer’s credit history, the lower the rate you’ll qualify for,” Nykiel said, adding that students with no credit or bad credit will be hard-pressed to qualify for private loans without co-signers. “But they could take out a federal student loan and have the same interest rate as someone who has excellent credit,” she said.

Private loan interest rates can be fixed or variable, the latter meaning the rate you pay could fluctuate based on the market. Nykiel recommended comparing private student loan rates with federal ones, while keeping in mind the additional benefits of federal loans, such as longer deferments/forbearances, income-driven repayment plans and loan forgiveness.

Interest accrues daily, regardless of if you’re making payments

Many loans (including federal loans and some private loans) don’t require you to start making payments until after you graduate — but that doesn’t mean interest isn’t piling up. “Many borrowers don’t realize...that interest accrues while they’re in school,” Nykiel said. “That means they’ll owe more than they originally borrowed even before entering repayment.”

And that goes not just for your school years, but also periods of deferment or forbearance, which are periods of time when you can temporarily stop or reduce your payments. The main difference between the two, according to the U.S. Department of Education, is that in some deferment cases for federal loans (listed on the Department’s website), you may not be required to pay back the interest that accrues during that time. “That interest adds up quickly, making forbearance a very costly repayment option,” Nykiel said, noting a NerdWallet study found that in the third quarter of 2018, 2.6 million student loan recipients had federal loans in forbearance, with an average balance of $43,538. “Keeping a loan with that balance in forbearance for 12 months would add an extra $2,199 to the balance, assuming an interest rate of 5.05% (the federal interest rate for subsidized and unsubsidized undergraduate loans in 2018-19),” she said.

Nykiel said borrowers typically will ultimately accrue the same amount in interest per day, incorporated into each monthly payment throughout the loan’s repayment period (“they don’t pay interest on the interest accrued the previous day”), but there are instances of loan capitalization, which means the interest you’ve accrued will get added to your principal balance. So, if you took $20,000 in loans and accrued $1,000 interest throughout college, the interest you owe once repayment starts will be a percentage of $21,000 — the initial loan plus the interest already accrued. According to NerdWallet, capitalization occurs in several scenarios, including after grace periods or periods of deferment/forbearance end and if you’re on an Income-Contingent Repayment plan.

If you’re not sure how much interest you’ll have to pay, you can use NerdWallet’s handy calculator to figure it out. Keep in mind that private loans have rules determined by individual lenders that may require other calculations

If you have private loans, you’re not necessarily stuck with the interest rate you got when you first took out the loan. “Many borrowers don’t know that they can refinance student loans to save on interest,” Nykiel said. If your credit history or financial circumstances have changed, you may be able to refinance your loan with a different lender and secure a better rate. “Borrowers save money if the new loan has a lower interest rate and a repayment schedule that’s short enough that it doesn’t end up costing more in interest over time,” Nykiel said.

One way to minimize your interest payments and avoid the woes of capitalization is to start paying back the interest while you’re still in school (or during the grace period after you graduate). This way, once you start repayment, it will be only on the initial amount you borrowed and the interest it’s accruing at present, rather than also on the interest accrued throughout your school years.

Another surefire way to minimize the amount of interest you pay is to pay off your loans as quickly as possible — including, Nykiel advised, avoiding income-driven repayment if you can. “These plans are great for low-income borrowers because they can lower monthly payments,” she said. “But they also increase the amount of interest borrowers pay over time by extending the loan term from 10 to 20 or 25 years.”

That said, it’s important to keep your other financial goals and responsibilities in mind and balance those expenses with potential increases in your student loan payments. Nykiel noted, “we generally recommend borrowers build up emergency savings, contribute to retirement accounts and pay off other high-interest debt before paying off student loans early.”