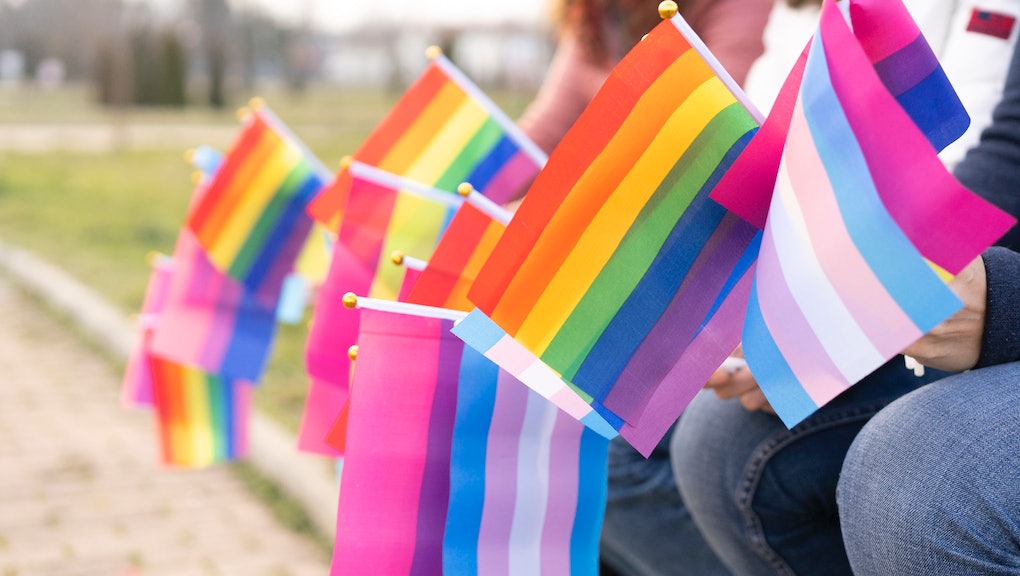 9 Gender and Sexuality Acronyms You Should Learn

You've certainly read and heard the acronym LGBTQ, which stands for lesbian/gay/bisexual/transgender/queer, countless times. But both gender and sexual orientation exist on a spectrum — and there are countless words, phrases, and acronyms (like GNC, AMAB, and more) that exist not only to help people express their own identities, but also to help everyone — including allies — better communicate. As the Human Rights Campaign (HRC) notes on its website, "Many Americans refrain from talking about sexual orientation and gender identity expression because it feels taboo, or because they're afraid of saying the wrong thing."

So, whether you're still exploring your own identity or want to make sure you're being the best ally you can be, it's worthwhile to take time to understand the meanings of acronyms you may come across in the future. Ahead, learn about nine gender and sexuality acronyms you might not already know — no more wondering, 'What does GNC stand for?' — and take them into account next time you're looking for a more inclusive or more specific term to use in regular conversation.

Gender and Sexual Minorities, a term that some favor over "LGBTQ" — Lesbian, Gay, Bisexual, and Transgender — because of its relative inclusiveness. In other words, anyone who does not identify as cisgender and/or heterosexual could consider themselves part of the GSM community.

Gender Non-Conforming, where one's gender norms or gender expression do not match the male/female traits expected by society. The GNC meaning also refers to people whose gender expression doesn't fit into a single category and encompasses many identities — including agender, genderfluid, and pangender. "Trans*" (note the asterisk) or "transgender" is sometimes used interchangeably with GNC, but more often refers to one's gender expression or identity being inconsistent with the one assigned at one's birth. You may also see or hear the acronym TGNC, which stands for trans and gender nonconforming, used instead.

Cross-dressing or cross dresser, where one wears clothing and other items contrary to one's societal gender norms or their assigned sex. A person who cross-dresses does not necessarily identify as trans*, since cross-dressing does not signify one's gender identity (or sexual orientation, for that matter).

Coercively assigned male/female at birth, used by GSM/GNC individuals as well as intersex people to describe how they were sexed at birth. In the case of intersex individuals — those with incompatible outer and inner genitalia — these acronyms could refer to the fact that the person did not have a choice in their sexing, or that they had surgery to "correct" the discrepancy (removing the "male" or "female" set of genitalia).

Trans-exclusionary radical feminists, a group of people who believe they're feminists while claiming that trans women aren't really women (and that trans men aren't really men), and thus exclude them from their cause. One TERF in particular, Victoria Brownworth, has gone so far as to say that "the role of male-to-female transsexuals in the women's movement as a whole and the lesbian movement in particular ... [is] the ultimate in male power-tripping." While TERFs — like Brownworth, as well as Harry Potter author J.K. Rowling and — may believe themselves to be feminists, the reality is feminism and transphobia are mutually exclusive.

Queer/Questioning, Undecided, Intersex, Lesbian, Transgender/Transexual, Bisexual, Allied/Asexual, Gay/Genderqueer, a term considered by some to be a more exclusive acronym than LGBTQ — and certainly easier to say.

Queer and Trans People of Color, an acronym that not only takes into account gender identity and sexual orientation, but also race — thus, as PFLAG notes, emphasizing intersectionality.

This article was originally published on June 29, 2013