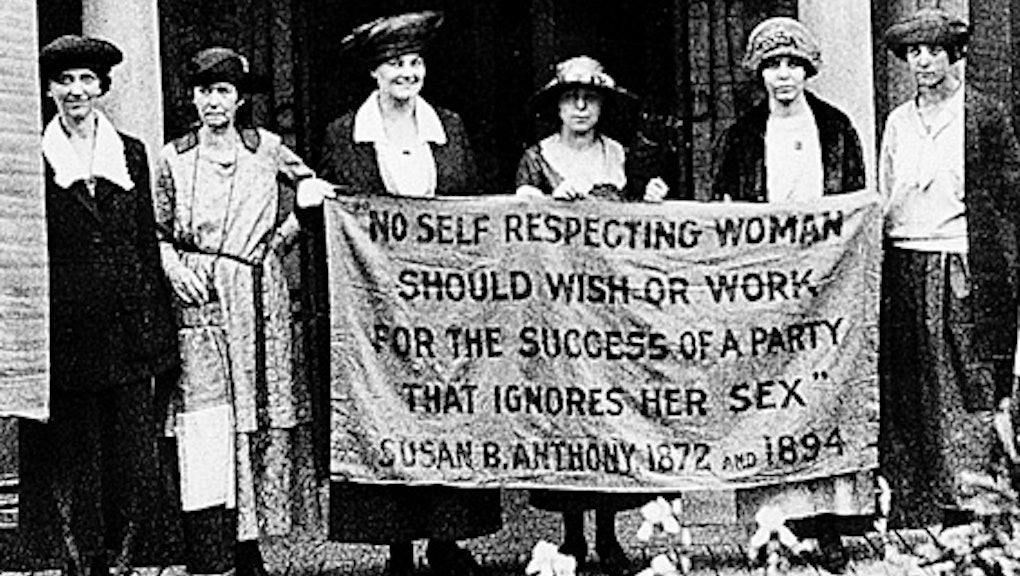 Texas, beneath the radar of higher-profile national races, will hold elections this fall to address a number of proposed constitutional amendments. Though none of the nine proposed amendments are exactly headline-grabbing (one officially eliminates a state agency that shut down more than 25 years ago, for example) the election will be the first in which the state’s infamous new voter ID laws will be in effect.

The anticipated impact of these new laws on suppressing minority votes has been well documented, but the effect of new laws on women has received markedly less attention.

The new Texas law requires all voters to provide a photo ID that reflects their current name. If they cannot, voters must provide any of a series of other acceptable forms of identification all of which must match exactly and match the name on their birth certificate.

Supporters of these new laws insist that requiring voters to have an ID that matches their birth certificate is a reasonable requirement. As Texas Attorney General Greg Abbott has repeatedly said, "Almost every single person either has a valid photo ID … or it is very easy to get one." What they don’t say, however, is that the people who don’t are largely married women who have taken their husband’s name.

In fact, only 66% of women have an ID that reflects their current name. If any voter is using name different than what appears on their birth certificate, the voter is required to show proof of name change by providing an original or certified copy of their marriage license, divorce decree, or court ordered name change. Photocopies aren’t accepted.

As Elisabeth Genn, counsel for the Brennan Center for Justice’s Democracy Program, has noted, "While some women do have access to the entire chain of documents that connects their current name with birth name — including birth certificates and marriage licenses — that’s not always the case."

Ordering a new copy of your birth certificate or marriage verification means travelling in person to the state capital, something largely impossible for senior citizens or people with day jobs, and paying the $22 to have a certified copy printed. You can also wait 6-8 weeks to have it mailed to you and pay $22 plus up to $19.95 in mailing costs.

That is assuming, of course, that you already have several forms of identification. If you don’t, a U.S. District Court has estimated that many Texans would have to travel up to 250 miles to receive a "free" election ID card and pay all the additional fees associated with providing documentation to explain their name change.

More importantly, women who have been voting the same way for years will likely go to the polls in the same way they always have, unaware the changes mean they can no longer vote and that they, in all likelihood, would have needed to begin the process to acquire copies of their legal documents months beforehand.

Meanwhile, men who are married or divorced don’t typically change their name and are therefore not required to submit any additional supporting documents. The extra forms of identification, extra fees, extra travel and, in many cases, exorbitant waiting times mean that the acquiring the documents necessary to legally vote amounts to a poll tax that applies only to women.  While lawmakers may say that those are small barriers, necessary to ensure the integrity of the voting process, they’re barriers that only apply to certain segments of the population.

While some Republican lawmakers insist these new rules are designed only to combat voter fraud, (note: in Texas there have only 37 individual cases voter fraud since 2000), others are more honest and admit that these laws will make it easier for Republicans to win elections, since the groups predominantly affected by the new rules tend to vote Democrat.

Despite a ruling from a U.S. District Court that declared the law unconstitutional, recent Supreme Court rulings that invalidated sections of the Voting Rights Act meant Texas could move forward to enforce the law anyway. Attorney General Eric Holder has announced that the Department of Justice will sue Texas over the law, saying that it "will take action against jurisdictions that attempt to hinder access to the ballot box, no matter where it occurs" and that he will "keep fighting aggressively to prevent voter disenfranchisement."

But as November 5th approaches, we’re reminded that elections are taking place whether or not the law is successfully blocked in court. In 2014, midterm Congressional and gubernatorial elections will be in full swing at the same time that similar voter ID restrictions go into effect in states across the country.

That means this time next year, it won’t just be Texas and it won’t just be nine obscure amendments to a state constitution. Millions of women, young and old, could go to the polls just like they always have and realize that, this time, the only thing they’ll be allowed to do is watch their husbands vote.