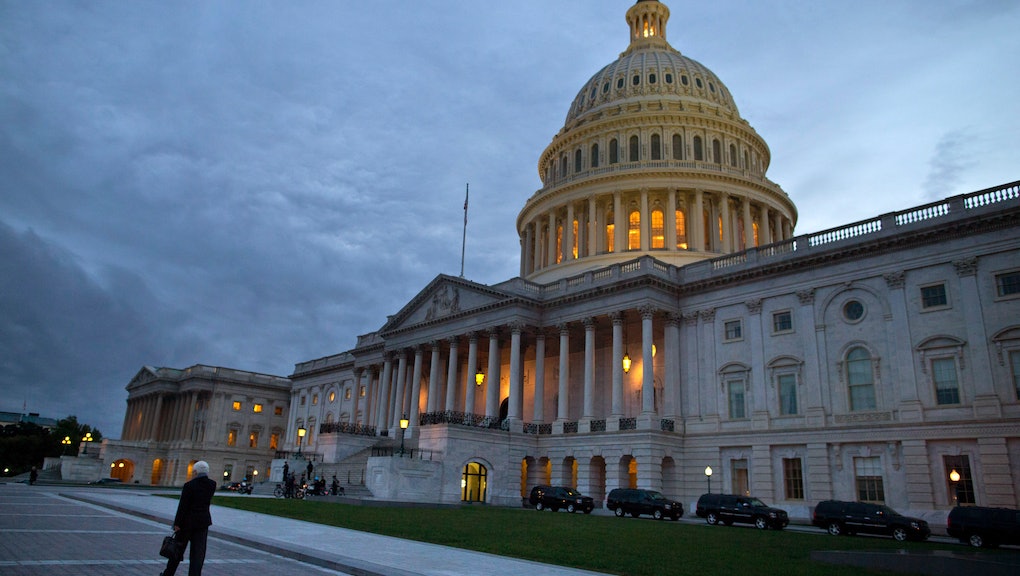 6 Things Americans Would Rather Talk About Than the Debt Ceilng

While our elected representatives in Congress struggled to find their inner Eli Manning and help their erstwhile opponents, we here at PolicyMic delved deep into the primordial polling soup that is popular opinion to report on what America cared about this month more about than the government shutdown. Courtesy of our friends at Google Trends and in no particular order, here are six other occasionally absurd, sometimes profound, and quintessentially search-engine-optimizable things about which America truly gave a damn as Washington was burning:

What it is: The Common Application is (wait for it…) a college ur-application that is used by hundreds of institutions of higher learning in the U.S. and abroad. Despite rumors to the contrary, it doesn’t automatically register you to vote as a Democrat based on the assumption that colleges are bastions of heathen liberalism (there’s an opt-out clause).

Why so popular: The Common App website followed the lead of healthcare.gov and stopped working at a key time: early decision and early action deadlines. Garbled text, poor formatting, and browser incompatibility plagued the rollout of a new software system built from scratch for the 2013-14 application cycle. Frustration is being vented publicly on the Common App Facebook page. Many schools with mid-October deadlines have pushed them back as a result of the delays, but as any former high-school senior likely knows, the monolithic November 1 deadline waits for no one.

Who it is: Mysterious, mischievous, and more or less ineffable, Banksy just might be the most important artist of the millennial generation. He recently visited New York because his native Britain’s architecture insists upon threatening the populace, and also because, art.

Why so popular: Far be it from me to assume the mantle of pop culture arbiter. In the words of fellow PolicyMic pundit Zak Cheney-Rice, “Working in the street art medium birthed by Bronx teenagers in the 1970s, the masked Brit uses a biting wit and extensive knowledge of pop culture to satirize countless relevant social and political topics.” On this trip to the Big Apple, Banksy has taken to lower Manhattan and Brooklyn with verve, ranging from playful stencil silhouettes to a sprawling Ludlow Street work spanning an entire truck and a car. He even opened a stall by Central Park to sell his works at $60 a pop, for what might effectively be a 99.9% off sale.

Who she is: Ontario native and author, primarily of short stories; previously winner of the Man Booker prize, PEN/Malamud Award, and National Book Critics Circle award; user of voicemail. As noted by Jonathan Franzen in the New York Times, “her excellence so dismayingly exceeds her fame.”

Why so popular: Munro was awarded the Nobel Prize for Literature last week, making her the 13th woman and first Canadian author in the 112 years the prize has been awarded. She won the award in the year that she released Dear Life, which is likely to be her last collection of short stories, essentially constituting a mic drop on the world’s greatest literary stage. Reinforcing rumors that she has ice in her veins when it comes to these things, and perhaps because she’s received scads of honors already, she went to sleep before the award was announced and was alerted to her selection when she woke up the next morning. For those unfamiliar with her work, Ben Dolnick of The Millions lets you know exactly where to start.

What it is: a highly addictive street drug responsible for massive cell death in users, usually leading to necrosis and a gangrenous, green scaling of the skin, thus the reptilian name.

Why so popular: Shock value, especially as reports of possible abuse have popped up in the U.S. for the first time (it is a hybrid drug first seen in Siberia, where its abuse is currently concentrated). The drug is cheap but horribly impure, usually containing paint thinner, gasoline, heavy metals, and plastic residue in addition to the primary opiate, desomorphine. The drug is a potent painkiller, adding a craving for relief from the extreme pain of the flesh-eating drug to the powerful pangs of withdrawal. Unsurprisingly, krokodil is among the most addictive narcotic cocktails known to man. Between necrosis, infection, blood poisoning, and ancillary effects, it’s estimated the average krokodil user only lives two years past his/her first dose. (Note: Be forewarned, images of krokodil abuse are extremely graphic.)

What it is: Bay Area Rapid Transit workers unions are seeking their first raise in four years, while BART management wants pension contributions and larger health care contributions. The work stoppage keeps getting pushed back, day by day, with many waiting until the early hours of the morning to find out whether or not the trains will be running the next day.

Why so popular: Though this is an interesting case in which most people, even in union households, are not supporting the labor side of the strike (BART employees are already fairly well compensated), the fact of the matter is that in the event of a strike, people need to know how they’re going to get to work. (Exception: the A’s). That said, given the cost of living in the Bay Area, affordable housing is increasingly out of reach for many citizens. The strike may yet expose that prevailing notions of fair compensation often fail to reflect the many unfair conditions that price hardworking families out of the middle class.

Who he is: The iconoclastic and irreverent comedian from some of your favorite films (Forgetting Sarah Marshall, Get Him To The Greek, Despicable Me) and films you won’t admit are your favorite because of their Rotten Tomatoes score (Arthur). Also a writer of not inconsiderable talents.

Why so popular: Just recently, Brand was announced as guest editor of an issue of the popular British magazine The New Statesman, following in the footsteps of Ai Weiwei and the bishop of Canterbury. The theme of the issue: revolution. Though many shake their heads at his antics, Brand’s intelligence and eloquence are well-documented, evidenced by editorials in the Guardian, extensive writings on his personal blog, his prolific stand-up work, and a sublime turn as a guest-cum-interrogator on Morning Joe. Lest the bar be set too high, he claims among other things that he will rename the publication The Nude Statesman, presumably indefinitely.