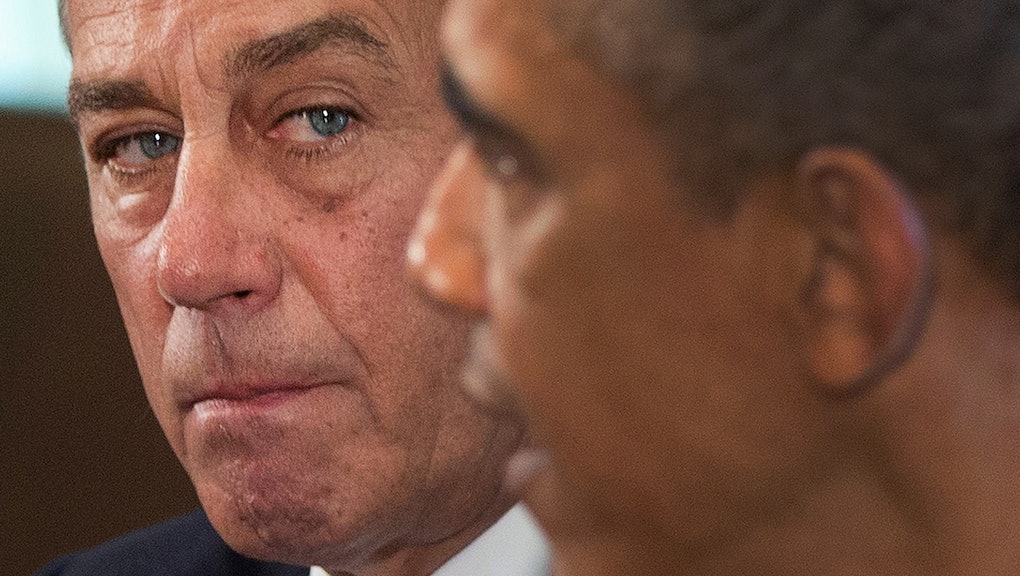 Obama's Greatness Demonstrated As He Defused the Republican Nuclear Bomb

America, it is time to doff your proverbial hat to President Barack Obama. This is what a leader looks like.

It isn't simply that he managed to protect his signature legislative legacy, the Affordable Care Act, from being mutilated and/or defunded by congressional Republicans. While that is quite the accomplishment in its own right (one that will be appreciated more with the passage of time, as its major provisions begin to change lives for the better), it is far less important than the precedent Obama has set through his conduct during the shutdown fiasco. If he had faltered, the threat of national default and state instability would have been established for a generation as a potentially effective tool for wielding power and shaping policy. By standing firm and humiliating his right-wing adversaries, Obama has at the very least poured water on that incendiary threat, if indeed he hasn't extinguished it altogether.

And make no mistake about it: Whether they admit it or not, the right-wing has been humiliated in this debacle. Most immediately, they have suffered a complete tactical failure — the Affordable Care Act is as firmly in place as ever, far more Americans blame Republicans than Obama and the Democrats for getting into this mess, and their once-ironclad grip on the spines of Speaker of the House John Boehner (R-Ohio) and other GOP leaders has been severely weakened.

On a much deeper level, however, they have been exposed to the world as a faction of fatuous fools. Never again can they preach the importance of financial rectitude without being reminded that they willingly drove America to the brink of economic disaster because of their opposition to a single social welfare program they disliked (and for all their talk of how Obamacare will hurt our national ledgers and business life, the quickest way to lose credibility in the academic or financial communities is to deny that intentional national default would be far, far worse).

Almost as significantly, they can no longer claim to represent the cutting edge of America's political future. For such a promise to be taken seriously, after all, it isn't enough to simply be the shrillest band of voices in the room. One must also offer a logically sound strategy for convincing America's moderate majority to rally behind your banner. As this incident has at last decisively revealed, all the far right has in its dialectical arsenal is a threat tantamount to Abraham Lincoln's description of Southern secessionists during his first presidential election: "A highwayman holds a pistol to my ear, and mutters through his teeth, 'Stand and deliver, or I shall kill you, and then you will be a murderer!'"

Indeed, the serious danger posed by what the far right attempted to do cannot be overstated. While Mark Levine did an excellent job of breaking down the details in an earlier PolicyMic op-ed, the best concise summary was offered by Warren Buffett, who accurately observed that the debt ceiling is the "nuclear bomb" of American fiscal politics.

Because of the immeasurable havoc default would wreak on America's business community, and as such on the economy as a whole, it is very much akin to a financial weapon of mass destruction, one that can be used to bully opposing sides into acquiescence by simple virtue of the massive suffering that would be unleashed should they fail to comply. This is why, just as the use of atomic bombs has been taken off the table (at least ostensibly) so that responsible nations can maintain a modicum of civil order in their statecraft, so too have both sides in American politics avoided the political weaponization of debt default. Consequently, even though progressive Democrats were just as passionately opposed to Bush administration programs as the far right is to Obama's agenda (see the Bush tax cuts, the war in Iraq, the efforts to transform Medicare and Social Security), they never intimated that they would consider forcing debt default to thwart him. Once that bridge is crossed, devastation would almost inevitably follow.

Yet not only has the potential catastrophe been averted, but by refusing to capitulate to the far right's attempt at national economic blackmail, Obama has severely discredited any future efforts to attempt this in the future. Even if the Tea Party and its various radical libertarian and conservative supporters try a similar stunt early next year (which is entirely possible), the defeat they suffered this time will hobble them right from the get-go. Moreover, while they can take comfort in knowing that Americans will probably have forgotten about the October 2013 crisis by the time the 2014 midterm elections roll around, a repeat of this brouhaha next year would almost certainly redound to Obama's favor and, as such, to that of the Democrats. In short, by standing up to this nuclear threat, Obama has not only prevented mass destruction, but significantly reduced the appeal of the weapon itself.

Practically from the moment he was first elected, President Obama's critics have jumped at every opportunity to denounce and dismiss him. From Rush Limbaugh's infamously ungracious transition era declaration "I hope Obama fails" to Mitch McConnell's candid admission that Republicans foremost priority was for "Obama to be a one-term president," it has been fashionable among the right to not only denigrate Obama's ideology, but his skills as a leader. Even the left has frequently expressed disappointment with their so-called champion's ideological dithering, be it keeping Guantanamo Bay open and sanctioning NSA civil liberties abuses or watering down his stimulus package and abandoning a single-payer health care system. While many of these criticisms have been valid, they overlook the impressive litany of lasting achievements Obama has accrued during his tenure (for a comprehensive analysis, see my op-ed from last year here).

Now, after a year spent mired in the second-term curse that afflicts most presidents (as most soberingly demonstrated by his failure to pass any of the jobs, immigration, education, or gun control items he included in his State of the Union Address earlier this year), Obama has at last managed to walk away with an unequivocal triumph that not only burnishes his political brand, but benefits the nation. When future historians write about the ways Obama's presidency bettered this country, his conduct over the past month will be prominent among them.