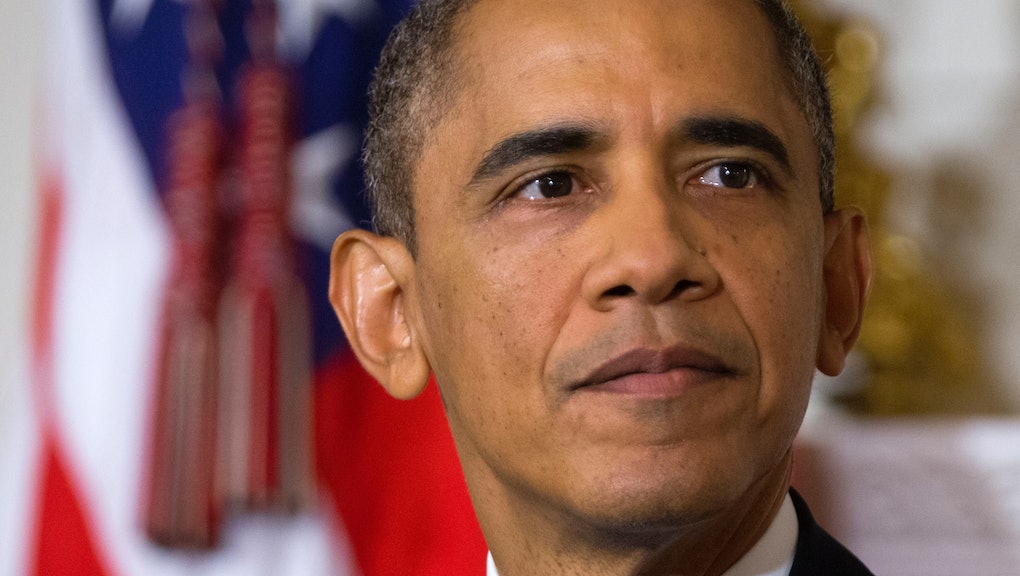 A Reason to Be Proud Of Obama, For Once

It took nearly three weeks, but the 2013 federal government shutdown is over and the debt ceiling has been raised, if only temporarily. Not much came out of the 16 days of back-and-forth bickering. The U.S. government is pretty much where it would have been had this not happened at all, and if anything, the economy is worse off. But at the end of it, there was very little compromise and barely any concessions were made to the Republican Party. And therein lies the one thing to take from all of this: a reason to be proud of President Barack Obama and Democrats.

The Republican Party purposefully got us into this mess, and Obama got us out the best he could. He deserves a thank you, and a pat on the back.

After years of watching him concede points to the GOP in the name of compromise and "bipartisan" negotiations, the president finally dug in his heels and refused to give an inch. The result? A resounding victory for him and his party. The Republican Party spent three weeks trying to get something, anything, out of Obama for shutting down the government and bringing the debt ceiling to the brink, but they ended up with nothing. Zilch. In the childish game of chicken that was this shutdown, the president held steady and the GOP flinched first. He stood up for his policies and his party and ceded not an inch. He finally gave his supporters a reason to be proud, instead of coming out with his tail between his legs, saying we had to give up some big things to get a little of what we wanted. Nope, this time we got exactly what we wanted.

"Let's be clear: there are no winners here," Obama said in remarks to the press the morning after he signed the legislation that reopened the government. But make no mistake: this was a victory speech. Before this, the president was great at winning elections and losing policy battles. Under his guise of compromise, the sequester cuts essentially became the standing norm for government spending. But this time he came to the table having learned something. He realized every time he gave up ground to the GOP they would only demand more. So he stopped. Every time the GOP came up with plan that included something they wanted, Obama was right there promising a veto. And lo and behold, it worked.

The president has finally, electorally secure in his second term, stopped negotiating with hostage takers. He's rallying his party and using the bully pulpit to get public opinion on his side. He's calling Republicans — and especially the Tea Party — on their bluff. Obama has, to put it bluntly, stopped taking any shit. He's even throwing a few punches on his way out. Heading into the shutdown, surely Republicans were going to get something they wanted. It was implausible that they could shutdown the government and nearly default the nation and walk away with nothing.

But somehow, Obama pulled it off. Who knows what it took. Maybe he just sat stone-faced and let the public opinion polls do the talking for him. But you have to give him credit for coming away with a win and making the GOP look really, truly incompetent in the process to boot.

Look, there are plenty of reasons to be disappointed with Obama's presidency thus far. October 17, 2013 is not one of them. He faced an unruly, radical Republican caucus head on and didn't budge. The Democratic Party, for once, came out looking good on a policy issue. Even the mainstream press budged a little bit toward calling it like it was instead of manufacturing blame to ascribe to both sides.

The shutdown was a laughable ordeal for the Republican Party and Obama played it entirely in his favor. One can only hope he remembers this next time it comes to a policy showdown. But for now, I'm going to relish in a reopened federal government. Because I'm proud of my president.