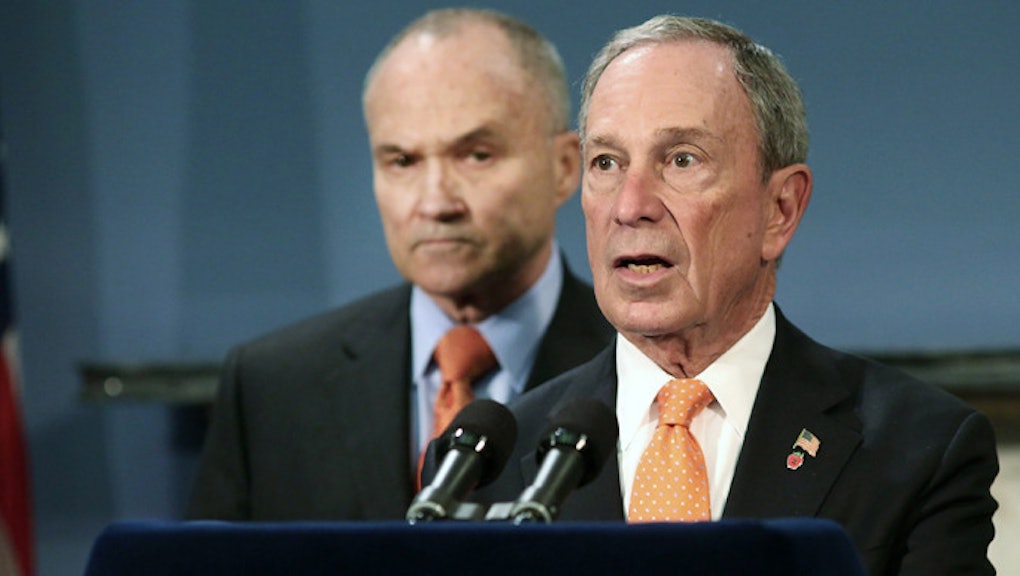 Michael Bloomberg's Legacy Should Be Rejected By Every New Yorker

The New York City of 2013 isn’t the same as it used to be: rotted, crime-ridden, caked in graffiti, and dotted with sex shops. According to Republican mayoral candidate Joe Lhota, however, if front-running Democrat Bill de Blasio wins in November, the Big Apple’s glossy surface will be chewed back to its once-destitute core.

But aside from the explosion of bike lanes and lacquered condos, what exactly have decades of Republican and independent governance offered New Yorkers? When it comes to civil liberties, the departing mayor’s legacy is less than stellar, to put it diplomatically.

For starters, Mayor Bloomberg’s obsequious deference to NYPD Commissioner Ray Kelly and the police union has produced a department that acts more like a military than a law enforcement agency, perhaps by design — “my own army…the seventh biggest army in the world,” as the Napoleon impersonator once crowed.

Luckily, federal judges don’t share in the mayor’s ominous egotism. An August federal court decision invalidated one of the NYPD's signature policies, the controversial “stop-and-frisk” program, whereby individuals are arbitrarily stopped by quota and searched without suspicion of criminality. The harassment protocol was ruled unconstitutional as amounting to a “policy of indirect racial profiling” given its staggeringly high rates of use against black and Latino men, in violation of the Fourth and Fourteenth Amendments.

And it isn’t just minority New Yorkers getting burned by the program. NYPD whistleblower Adrian Schoolcraft complained to his superiors that the stop-and-frisk quota system was encouraging corruption and was rewarded in a way that makes Obama’s persecution of whistleblowers look like child's play. Taking a page from the “Leonid Brezhnev Guide To Handling Dissidents,” Schoolcraft had his apartment raided by a SWAT team and was forcibly committed to a mental hospital.

And where Bloomberg’s “army” is insufficient, his own intelligence agency — illegally set up by the CIA following 9/11 — picks up the slack.

For New Yorkers born into a Muslim family or those who espouse political ideas outside the Democrat-Republican spectrum, the city relies on spying that would make James Clapper blush. The NYPD’s Intelligence Division has infiltrated untold numbers of law-abiding organizations, including those engaging in peaceful First Amendment activity, disaster relief, and collegiate groups far outside city jurisdiction. A senior FBI official even told the executive of the private security firm Stratfor in an email that the NYPD Intelligence Division was "going to make Hoover, COINTEL, Red Squads, etc look like rank amatures [sic] compared to some of the damn right [sic] felonious activity, and violations of US citizens rights they have been engaged in.”

Despite the constant invocation of terrorism by the Keebler Elf stunt-double-in-chief, a deposition on the Muslim surveillance policy revealed that the NYPD’s “demographics unit” — responsible for mapping out the locations of just about every Muslim citizen in New York and Northern New Jersey — had not produced one single investigative lead.

And for those who have yet to discover a cop personally tailing them: Don’t worry, Bloomie has an app for that.

The NYPD’s Domain Awareness System (DAS) has blanketed New York City with CCTV cameras, and cross-references that visual data with a host of other information repositories including the intrusive and prone-to-abuse license plate database that tracks car movements. The information is then sent for analysis to a central location that isn’t just staffed by NYPD or other law enforcement agencies. There are seats within reserved for representatives from the Federal Reserve, the Bank of New York, Goldman Sachs, Pfizer, and CitiGroup — Bloomberg’s real constituency.

And those are just the mayor’s more egregious policies. Police abuse of peaceful protesters, wanton shooting of unarmed black and brown men, and skyrocketing arrests for personal marijuana use are so part and parcel of the city’s DNA that they barely even register as controversial anymore. It’s just the systemic, everyday violence that the city government perpetrates.

“But it’s all to make us safe,” you say? Perhaps. But what we should really be asking is, who is “us,” and who’s really being protected? New York City may be the multicolored melting pot of common lore, but the past decade of government policies appear set on ensuring that only cream rises to the top — or at least gets there without being harassed by the cops.